You are here: Home / Books / Enshadowed by Kelly Creagh Book Review
Thanks for sharing!

I love Kelly Creagh’s books. My daughter won an ARC of Enshadowed in a contest, so we got to read it before it’s release. It is an amazing sequel to her debut novel Nevermore. 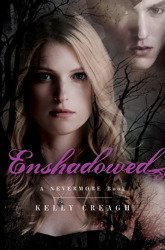 This post contains affiliate links. If you make a purchase I’ll receive a small commission. Thanks!

Varen Nethers is trapped in a perilous dream world — a treacherous and desolate realm where the terrifying stories of Edgar Allan Poe come to life. Isobel Lanley, plagued by strange visions and haunted by the nightmares of Varen’s creation, is the only one who can save him.

Isobel knows that her only hope lies within a Baltimore cemetery. There, in the early morning hours of Edgar Allan Poe’s birthday, a mysterious stranger known as the “Poe Toaster” will make his annual homage at the legendary poet’s grave.

Only the Poe Toaster holds the key to the way between worlds. But even greater dangers lie ahead for Isobel. An ancient evil, draped in veils of white, is watching, challenging her for Varen’s affections. When Isobel finally finds Varen, he is no longer the quiet and brooding boy who once captivated her, but a dark force, powerful and malevolent

My Mini Review of Enshadowed

In this book, Kelly takes us back into Isobel’s pain after losing Varen to a bleak dream world. She is no longer the popular, happy cheerleader. Her dreams are horrifying. She is desperate to find Varen, and in her desperation, she deceives her parents. She talks her dad into taking her to visit a university near Poe’s grave on the day the Poe toaster is set to make his appearance.

Book three, Oblivion, was released in 2015 and finished the series well. If you are a fan of young adult books, you’ve got to read the Nevermore series.

Head to Kelly’s website to see what she is working on now!

Thanks for sharing!
« The City of Ember by Jeanne DuPrau | Book Review
Anna Dressed in Blood by Kendare Blake | Book Review »