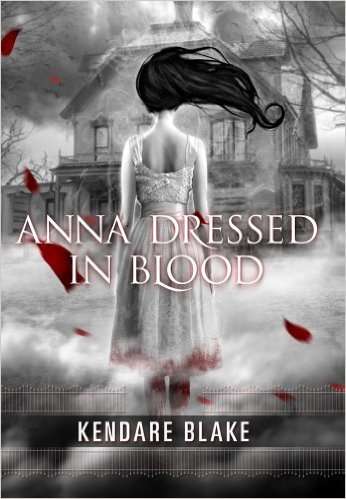 This post contains affiliate links. If you make a purchase using these links, I will receive a small compensation.

Cas Lowood has inherited an unusual vocation: He kills the dead.

So did his father before him, until his gruesome murder by a ghost he sought to kill. Now, armed with his father’s mysterious and deadly athame, Cas travels the country with his kitchen-witch mother and their spirit-sniffing cat. Together they follow legends and local lore, trying to keep up with the murderous dead—keeping pesky things like the future and friends at bay.

When they arrive in a new town in search of a ghost the locals call Anna Dressed in Blood, Cas doesn’t expect anything outside of the ordinary: move, hunt, kill. What he finds instead is a girl entangled in curses and rage, a ghost like he’s never faced before. She still wears the dress she wore on the day of her brutal murder in 1958: once white, but now stained red and dripping blood. Since her death, Anna has killed any and every person who has dared to step into the deserted Victorian she used to call home.

And she, for whatever reason, spares his life.

I just finished Anna Dressed in Blood, and thank goodness, I have Girl of Nightmares

sitting right beside me! Anna Dressed in Blood by Kendare Blake is amazing! As Kirkus Reviews puts it “Stephen King ought to start looking over his shoulder.”  She is an amazing story-teller. She puts her readers under a spell that is only broken once the last word is read. Even then, it is hard to come out from under!

Anna Dressed in Blood is a ghost story, a love story, a horror story. Cas Lowood and his mother have been traveling the country in search of murderous ghosts for years.  Cas wields the power his father once held. The power to kill the dead.  When Cas hears the tale of Anna Dressed in Blood he seeks her out to kill her.

The events which ensue are ones you will have to read to believe. Ms. Blake has created a world of magic that will be sure to leave you with goosebumps and give you the chills. It is a great book to read on a chilly night under the covers.

Find out more about Kendare Blake and her latest books on her website.