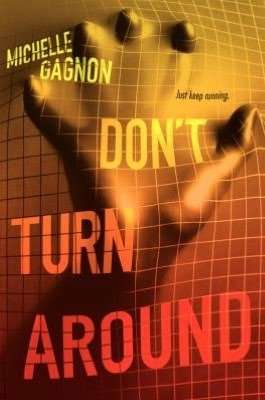 This post contains affiliate links. If you make a purchase with them, I will receive a small commission. Thanks!

Sixteen-year-old Noa has been a victim of the system ever since her parents died. Now living off the grid and trusting no one, she uses her computer-hacking skills to stay safely anonymous and alone. But when she wakes up on a table in an empty warehouse with an IV in her arm and no memory of how she got there, Noa starts to wish she had someone on her side. Enter Peter Gregory. A rich kid and the leader of a hacker alliance, Peter needs people with Noa’s talents on his team. Especially after a shady corporation called AMRF threatens his life in no uncertain terms. But what Noa and Peter don’t realize is that Noa holds the key to a terrible secret, and there are those who’d stop at nothing to silence her for good.

My Review of Don’t Turn Around

I loved this book so much more than I thought I would! I guess I didn’t think the story would be as endearing as it was. I thought it would be more techy and sort of cold for some reason. It’s been compared to The Girl with the Dragon Tattoo which I loved, but that book is so much colder and bleaker. I’m not sure where they get the comparison. Yes, Noa and Lisbeth are both hackers, but that is where the comparison stops for me. But that’s my opinion 🙂

Don’t Turn Around is sort of a dystopian in that it takes place at some point in the future, but that isn’t really how I’d classify it. I’d say it is more of a thriller. The government may or may not be completely corrupt, but the common people do not know this fact. Life is pretty much like it is for us in the year 2012 except for the fact that PEMA (a deadly disease) is killing many adolescents.

Noa, along with other teens, has become a human test subject without her consent. As she tries to track down answers, she becomes involved with Peter whose parents are somehow involved in the research.

Like always, I don’t want to give away too much of the book 🙂 The major characters are very well developed and the plot is very fast moving. I read this book in just a couple of days. Once you start this one, you will have a hard time putting it down!

I haven’t heard if there is going to be a second book to this series, but the ending sets it up for a sequel for sure!

Thanks for sharing!
« Book Review: The Diviners by Libba Bray
Book Review On the Run by Lorena McCourtney »