You are here: Home / Books / Starflower by Anne Elisabeth Stengl | Book Review
Thanks for sharing! 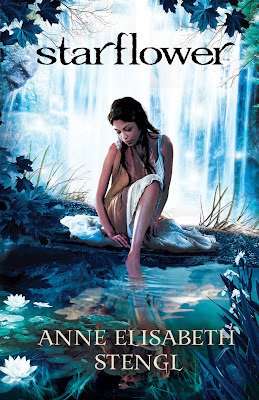 When a cursed dragon-witch kidnaps the lovely Lady Gleamdren, Eanrin sets boldly forth on a rescue mission…and a race against his rival for Gleamdren’s favor. Intent upon his quest, the last thing the immortal Faerie needs is to become mixed up with the troubles of an insignificant mortal.

But when he stumbles upon a maiden trapped in an enchanted sleep, he cannot leave her alone in the dangerous Wood Between. One waking kiss later, Eanrin suddenly finds his story entangled with that of young Starflower. A strange link exists between this mortal girl and the dragon-witch. Will Starflower prove the key to Lady Gleamdren’s rescue? Or will the dark power from which she flees destroy both her and her rescuer?

My Review of Starflower

If you are a fan of allegorical fantasy books like The Chronicles of Narnia and The Lord of the Rings, you will love Starflower. This is the fourth book in the Dragonwood Series by Anne Elisabeth Stengl. I was asked to be part of this blog tour for this book and though I hadn’t read any of the other books in this series, I agreed. I read the synopsis and thought it sounded like a wonderful story. It is! Though it is the fourth in the series, it is the prequel to the other three. I did not feel like I was missing anything crucial and thoroughly enjoyed this book on its own.

Starflower takes place part in the world of Fae and part in the world of humans. The story begins in the world of the faeries, and it’s a place of peace and a place of enjoyment. A faerie party would be nothing without its bard singing tales of love to the fair maiden, so this story has the bard and the maiden. The maiden is taken by a fallen dragon who must find what her father desires so he will return her wings to her. Two of the maidens admirers begin on the perilous journey to rescue her.

On the way, Eanrin, part-time cat, comes upon a mortal who is unconscious by the river’s edge. He believes she must be a princess, for who else would succumb to the river’s waters. Eanrin rescues her by taking her to a place where princes are toads. He is owed a favor, so the one who has turned the princes to toads allows a toad to kiss the mortal woman and she wakes up. (This is one of the best scenes. It is hilarious. All of the toads are croaking, “Kiss me.” )

The book takes you on an unbelievable journey through worlds unknown to humans. It is fully of humor, excitement, and heart. It has such depth. I could see the influence of the poem, The Hound of Heaven, even before I got to the end where Mrs. Stengl says it was influential in this book. The Hound chases you and you run from him believing he wants to harm you. The Beast promises you immortality and promises to make you a god, only to lead you to death. But once the Hound finds you, He gives you more than you could ever imagine.

I know I cannot do this book justice in a review without giving away too much of the story, and I want you to find out on your own how amazing it is. I usually do not read this type of fantasy, but I will definitely be reading the rest of the books in this series!

Anne Elisabeth Stengl makes her home in Raleigh, North Carolina, where she lives with her husband, Rohan, a passel of cats, and one long-suffering dog. When she’s not writing, she enjoys Shakespeare, opera, and tea, and studies piano, painting, and pastry baking. She studied illustration at Grace College and English literature at Campbell University. She is the author of HEARTLESS, VEILED ROSE, MOONBLOOD, and STARFLOWER, with DRAGONWITCH due to release in 2013. HEARTLESS and VEILED ROSE have each been honored with a Christy Award.