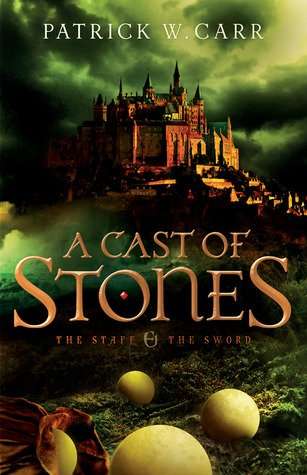 A Cast of Stones

In the backwater village of Callowford, Errol Stone’s search for a drink is interrupted by a church messenger who arrives with urgent missives for the hermit priest in the hills.

Desperate for coin, Errol volunteers to deliver them but soon finds himself hunted by deadly assassins. Forced to flee with the priest and a small band of travelers, Errol soon learns he’s joined a quest that could change the fate of his kingdom.

Protected for millennia by the heirs of the first king, the kingdom’s dynasty is near an end and a new king must be selected. As tension and danger mount, Errol must leave behind his drunkenness and grief, learn to fight, and come to know his God in order to survive a journey to discover his destiny.

My Review of A Cast of Stones

A Cast of Stones blew me away! I was not expecting to love it as much as I did. The secondary characters are just as deep and well-developed as the primary ones. Each setting is rich and distinct. The plot moves so fluidly that you feel you are right beside Errol throughout his journey.

Nineteen year old Errol Stone is living his life at the bottom of the ale barrel when he is summoned to deliver a message to a recluse priest and reader of lots who live just outside of his village. Although the message is ruined and unreadable due to strange circumstances on Errol’s journey, the fact that the message has been sent is enough for them to leave their private lives and re-enter the kingdom.

Errol is so much more than the town drunk. He is more than he ever imagined himself to be. He must take this journey along with the priest, the reader, and others. Errol’s journey is an epic journey filled with characters who change his life in a way he could never imagine.

A Cast of Stones is Good versus Evil played out in a sweeping epic journey. Its plot will draw you in from the first chapter and will keep you engaged throughout. You will meet characters that jump off the page and drag you into the book with them. You will travel through dark, evil places. You will feel Errol’s pain and his triumph.

Patrick W. Carr has certainly made a fan out of me! I am so looking forward to the continuation of this series in The Hero’s Lot.