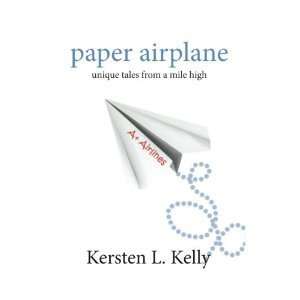 When Ms. Kelly contacted me about reviewing her book, paper airplane, I was happy to say yes since the premise was so appealing. Who wouldn’t love to read a book about life lessons learned while listening to perfect strangers while traveling by airplane? There are tales about friendships, families, and dreams. Tales of philanthropy and tales of humble service. The book includes 16 personal anecdotes from Kelly’s travels throughout the United States as well as overseas. While there were many pros I found in the book, there were also some cons. But what may be a con for me, may be a pro for you. This is just my opinion as a reader.

You can tell from Kelly’s writing that she is very analytically minded. In fact, her first published book is a book on economics called economics: a simple twist on normalcy.  Her writing shows her to be a fact-oriented person. That is an awesome thing in her profession! To put it into popular jargon, she seems to be a “left-brained” thinker. I am in no way a “left-brained” thinker, so the execution of the stories was disappointing to me at times.

Though most of the stories themselves were appealing, they left me feeling a little empty. Someone in the business field may have a totally different reaction than I. Some people enjoy a straight-forward re-telling, while others look for more of a emotion oriented re-telling.  Kelly also includes quite a few footnotes that really were not necessary. To someone who is fact-oriented, sharing who Gene Kelly is may seem a necessity, but the context in which he is brought up leaves little question as to what he did and most of the people reading this book probably know who he was. Most of the footnotes were things people could either easily figure out in the context of the story or through an Internet search.

The story I liked the least

My least favorite story was the story of “Roger”, The Crabby Splasher. Although I did graduate with a degree in Psychology, I am no professional. However, I do believe that Ms. Kelly misinterpreted the behavior of Roger. She describes first encountering him while waiting to board a plane. He was dressed oddly and talking to himself. I will not go into the details as you may want to read this for yourself, but what occurs later, Kelly interprets as selfish behavior on Roger’s part.

Roger sounds just like a familiar character in my town. She is called the bike lady by some and the bird lady by others. She can be seen all around town in every kind of weather riding her bike. She is always talking to herself. She yells at cars and the bird lady part comes in when she is showing those cars her anger with them! Everyone in town knows that she is schizophrenic. This is not to say that Roger was a schizophrenic, but the bizarre behavior he exhibited was almost definitely not selfishness nor stubbornness. Perhaps he had a panic attack. I really do not believe he would have been allowed back on the plane had he just been exhibiting selfish behavior.

The story I liked best

My favorite story was about “Jonah”, The Philanthropic Sailor. In it we learn about a man who travels the world with his family in a thirty-seven foot sailboat. Every port his family sailed into was a new chance for showering the people in the area with love. The family helps with whatever needs the people have. For example, after hurricane Katrina, his family spent four weeks in the area cleaning up debris. That is the story of someone with a true servant’s heart. It should encourage us to be more giving in our day to day encounters with others. It is truly a joy to read his story.

All in all, paper airplane: unique tales from a mile high, does have qualities about it that make it memorable. Though the writing style may not be literary, many of the stories will impact the way you think. The next time you are on an airplane, take the time to talk to your neighbor. You never know what you may learn.

Kersten L. Kelly is a self-published author of narrative non-fiction and semi-fiction books. She grew up in Munster, Indiana, and currently works in a sales role based out of Chicago, Illinois. She started writing at an early age and graduated from Indiana University with a dual Bachelor’s Degree in Economics and Communication & Culture. She then went on to earn a Master’s in Business Administration from the Kelley School of Business at Indiana University. She has a passion for learning, teaching, and writing as well as international travel in her spare time.

Thanks for sharing!
« Book Review The Gingerbread House by Nell Carson
Three Sisters and Showstoppers Book Tour and Review »