You are here: Home / Books / Book Reviews / Jack Templar and The Monster Hunter Academy by Jeff Gunhus | Book Review
Thanks for sharing! 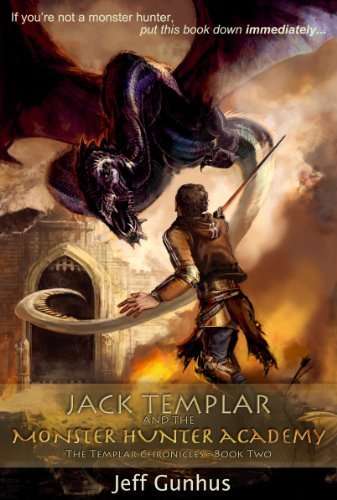 After barely surviving the onslaught of monsters that tried to kill him the day before his fourteenth birthday, Jack Templar leaves his hometown on a quest to rescue his father and discover the truth about his past.

Joined by his friends Will and T-Rex, and led by Eva, the mysterious one-handed monster hunter, Jack sets out for the Monster Hunter Academy where he hopes to find answers to his questions. Little does he suspect that the Academy is filled with dangers of its own, many of them more terrifying than anything he’s faced so far.

My Review of Jack Templar and The Monster Hunter Academy

If you’ve been following my blog at all, you know that I love books. I am always reading and lately have been seriously overextending myself for reviews! I’m being very choosy now, so that I have time to read the books I know I will love and enjoy. I chose to review Jack Templar and The Monster Hunter Academy because I knew it was a winner. I read the first book in the Jack Templar series and absolutely adored it. It was funny and intelligent and adventurous.

Jack is back, and he is on his way to the Monster Hunter Academy where he will study to become a true hunter of the creach (monsters). Jack has some selfish reasons for going. He wants to find out what really happened to his parents, and he believes he’ll find the answers at the academy.

Jack’s friends are back for this one: T-Rex, Will, and Eva. Then there is Daniel who, for reasons unknown to Jack, does not like him. On the way to the academy, Jack has a run in with a pack of wolves, and he finds a deep connection with one. This makes Daniel despise Jack even more. It’s all explained in the book, so don’t worry! Jack makes a new friend in Xavier who loves finding new ways to fight monsters.

Once at the academy, T-Rex finds his place among the Ratlings, while Jack and Will find themselves training with the hunters. The leader of the academy reminds me very much of Professor Dumbledore from the Harry Potter books. ( I know people keep comparing this series to Harry Potter. It is really a fair comparison. They are very well written and the characters are just as lovable as those in the Harry Potter series.) She knows much about Jack’s past, but she is unwilling to tell him anything until he completes his training.

Adventure ensues. Jack must face serious danger. The academy comes under attack. Will Jack and his friends be captured by the creach? Will the academy be destroyed? Find out in this wonderfully written book for all ages! The scenes are full of adventure and detail, and the characters are fun and believable. Check this series out for some fun summer reading!

Jeff Gunhus grew up in Cyprus, Greece, and Saudi Arabia where there was a distinct lack of television. He quickly found books were the gateway to incredible adventures, fascinating characters and unbelievable discoveries. Now, with five children of his own (all who watch too much television, in his opinion), he has enjoyed revisiting his old books and reliving those adventures all over again.