You are here: Home / Entertainment / The Rock and Roll Hall of Fame: Music Then and Now
Thanks for sharing!

The Rock and Roll Hall of Fame 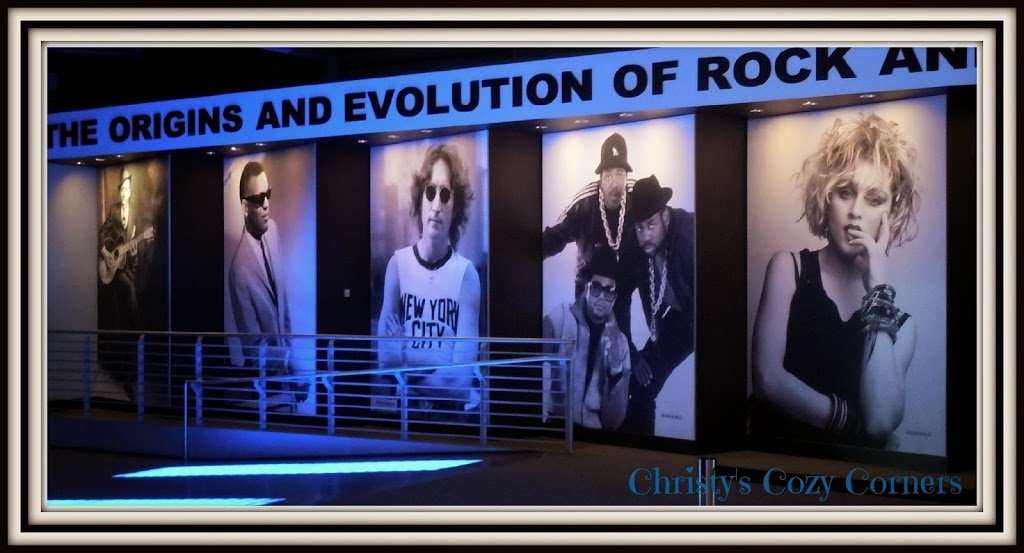 Growing up with 80’s music

Music. It speaks to all of us in different ways, and we all have different tastes in the music we love. I grew up in the 80’s and was a teenager in the mid to late 80’s. The pop music of that decade shaped my musical tastes. Michael and Madonna. Prince and Poison. Bon Jovi and The Bangles. They ruled the airways and Casey Kasem’s American Top 40. Every Saturday morning, I’d listen to the chart topping hits and sing along. I had the Madonna lace fingerless gloves and most girls tried to have Madonna’s headband hairstyle. Michael Jackson was the King of Pop, and he was everywhere! 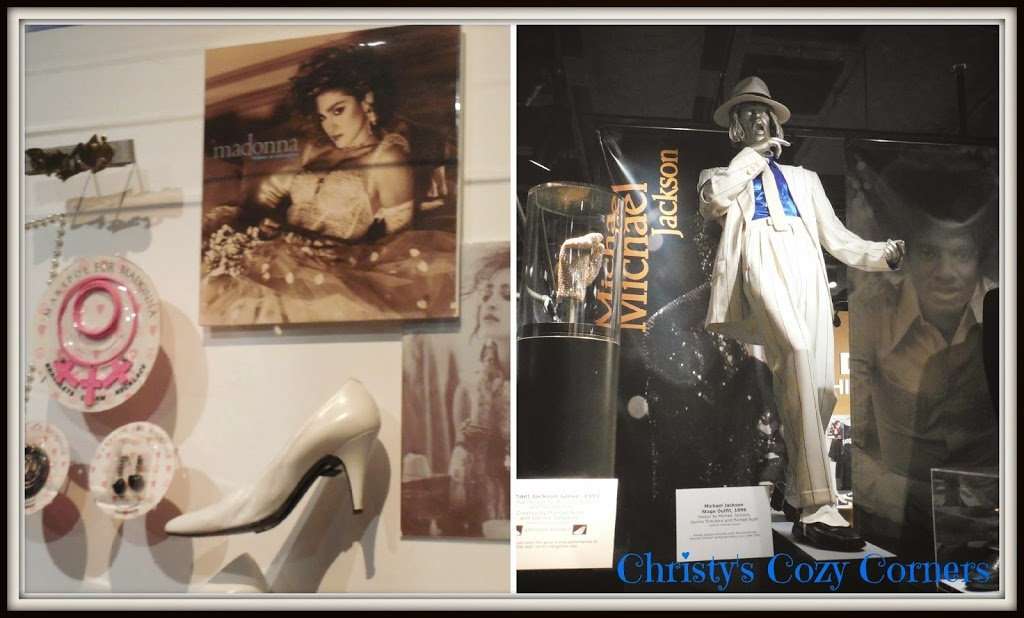 Being introduced to 70’s music

When I met my future husband, I got introduced to a whole new decade of music. The 70’s. He was 13 years older than I and had a whole different view of music. His era and taste in music was that of  Led Zeppelin, Black Sabbath, Bruce Springsteen and Pink Floyd. 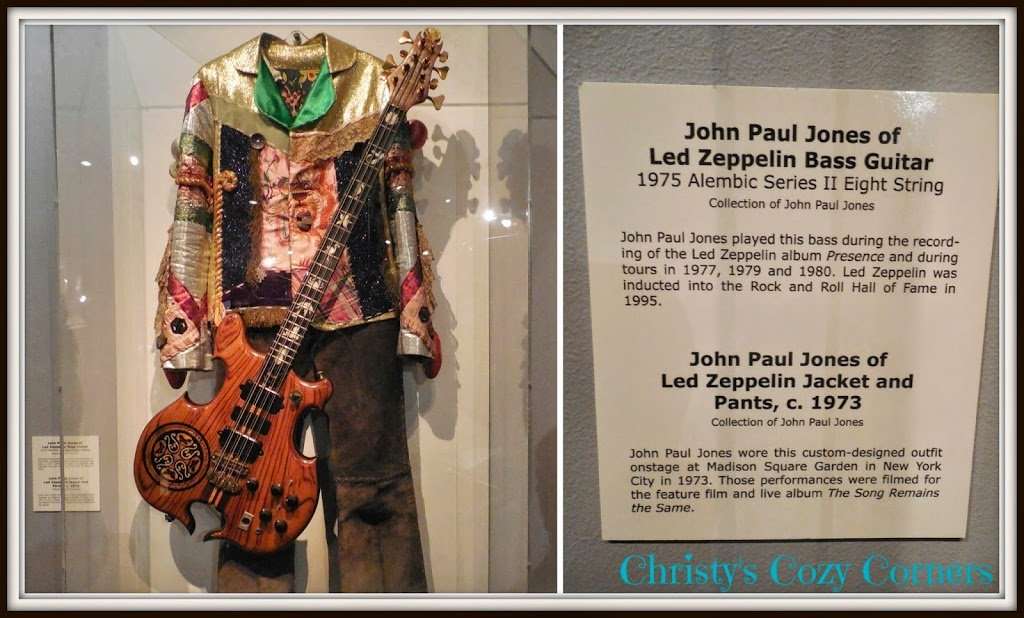 My small little pop music world exploded to include Lynyrd Skynyrd, The Eagles, The Beatles, Eric Clapton, Fleetwood Mac, and so much more. Right after I met Kevin, he asked me if I wanted to go see The Allman Brothers Band with him. I was like, “Who?” and I didn’t go. Now I wish I had. He took his cousin instead. I missed out on that great opportunity. 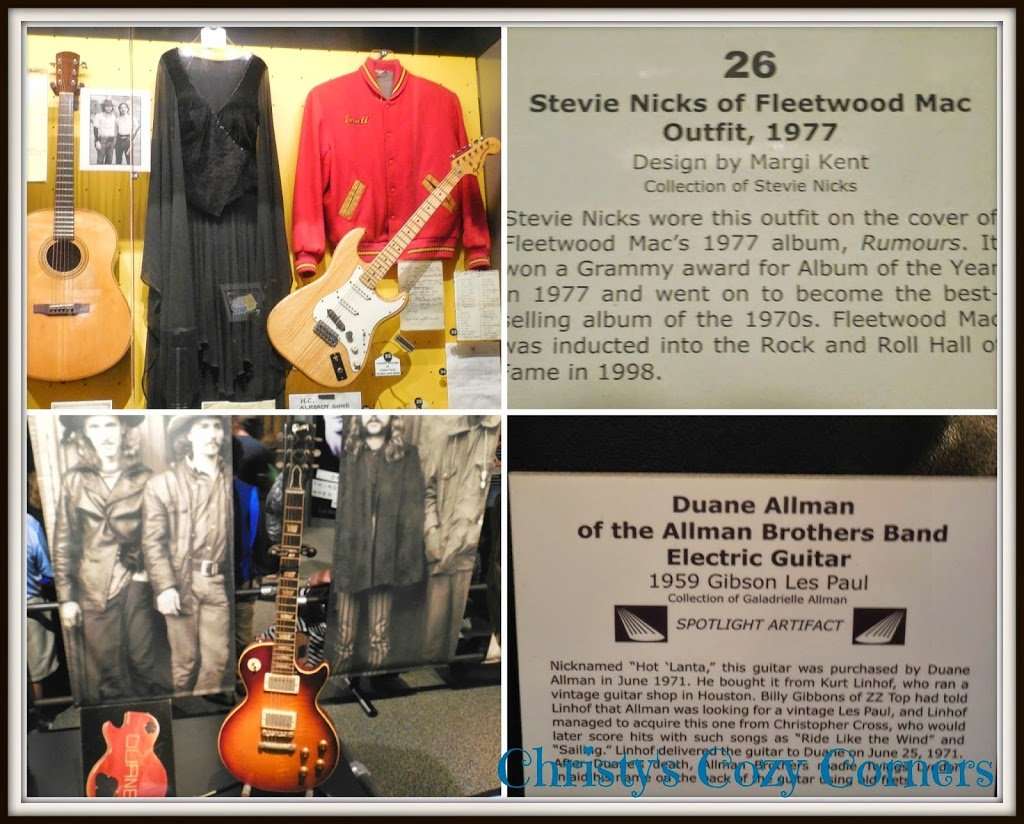 A son who loves classic rock

Music was such a huge part of Kevin’s life. Now our son Kyle has taken over for his dad in his music tastes and guitar playing. It’s one way that Kevin stays alive in our lives even though he passed away. Kyle plays Kevin’s old CDs and records. He found some of Kevin’s old Bruce Springsteen concert t-shirts and wears those sometimes.

He’s never had a guitar lesson in his life, yet he’s got his dad’s talent for picking it up by ear. He loves guitars and would buy several a year if he could. Music lives in Kyle. When we found out we were going to get free tickets to go to the Rock and Roll Hall of Fame as part of a media trip, Kyle was super psyched. Molly was as well, but she’s more of a modern music girl. And fortunately for her, there were some modern artifacts for her to enjoy at the hall. 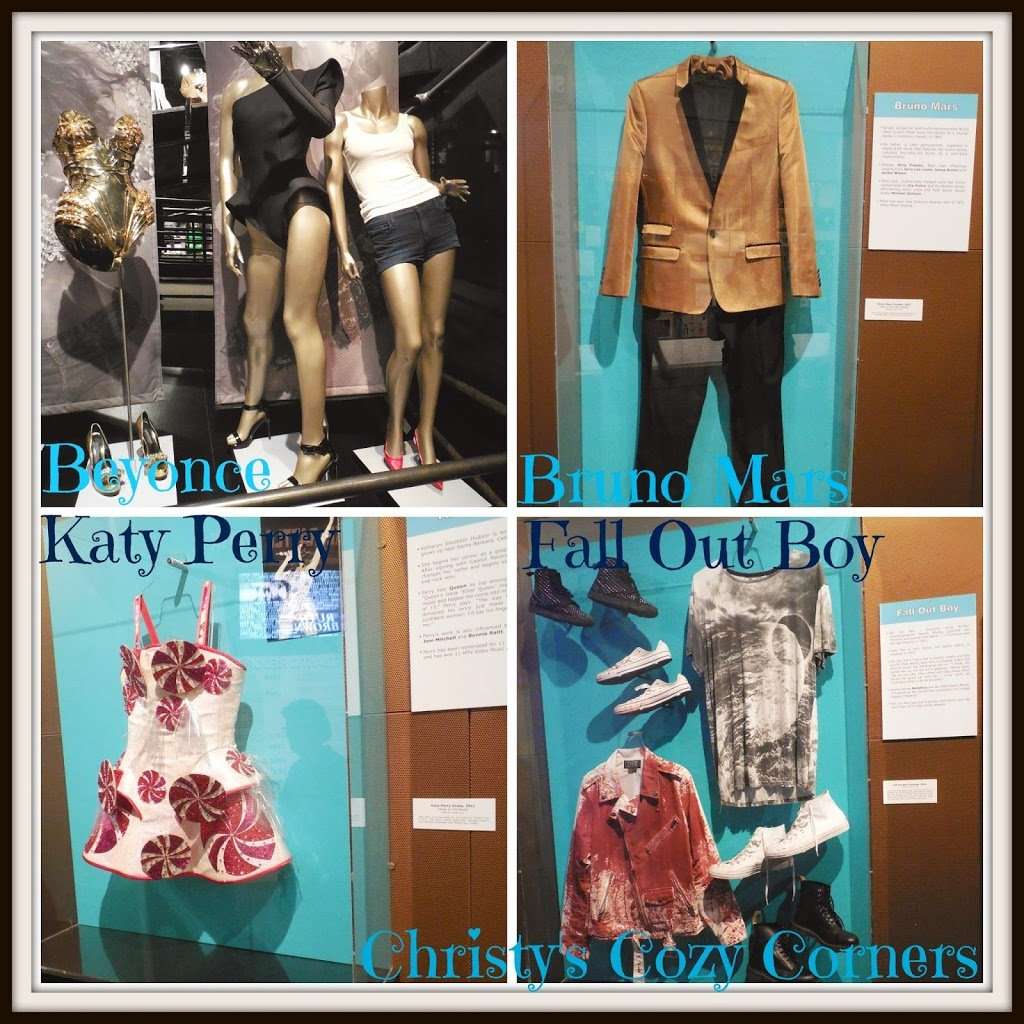 The history of Rock and Roll

I love seeing the progression of music, so one of my favorite things at the Rock and Roll Hall of Fame is the Mystery Train film. It is a 12 minute film that takes you on a journey through time. This is the first thing you should do when you visit. When you leave it, you enter into the different eras of music with artifacts from back in the 40’s through today. (Update: The last time I visited, this film was no longer playing.) 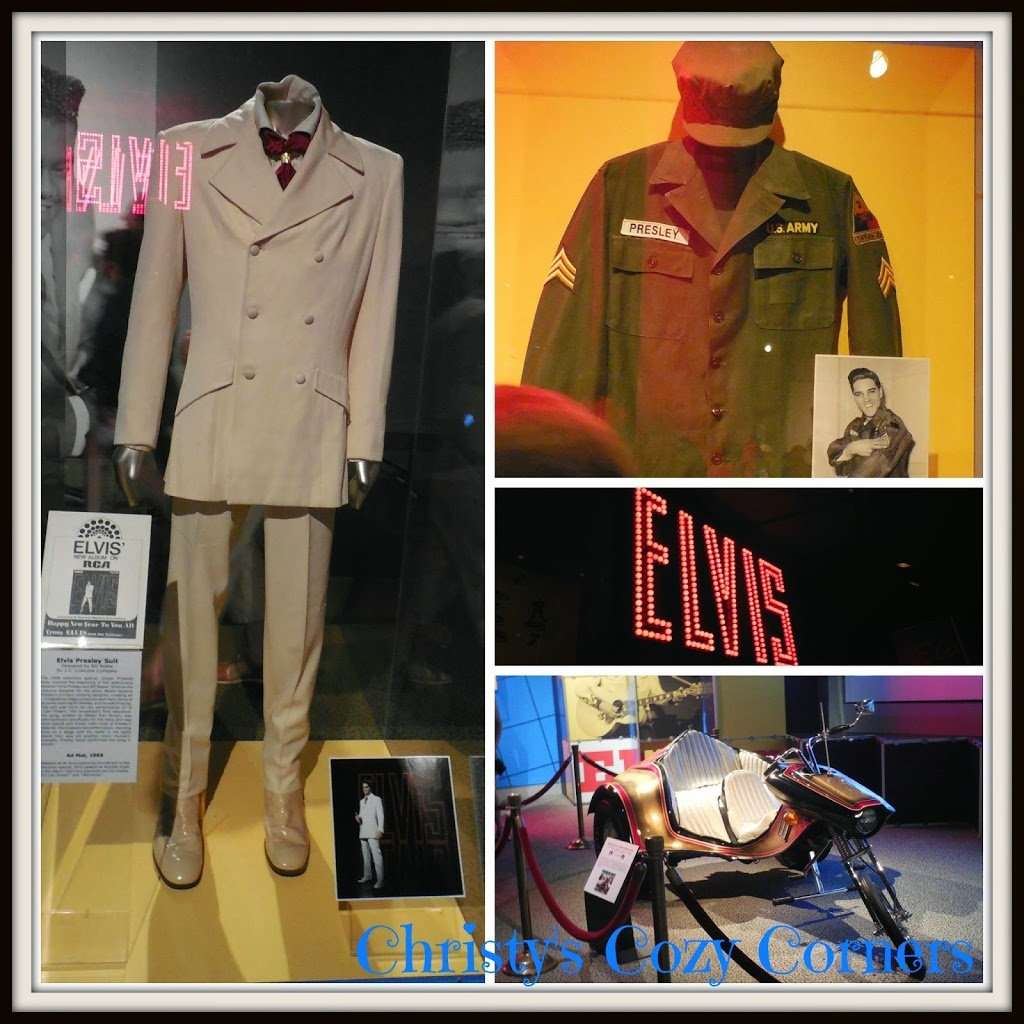 Elvis may not have been the first rock and roll star, but he certainly was the King of Rock and Roll. There is a special Elvis Presley exhibit at the Rock and Roll Hall of Fame. You can see his army uniform, rings, suits, and one of his custom motorcycles in the exhibit. Elvis Presley currently holds the record for most consecutive number one hits, most Top 40 hits, and the most Top 10 hits. 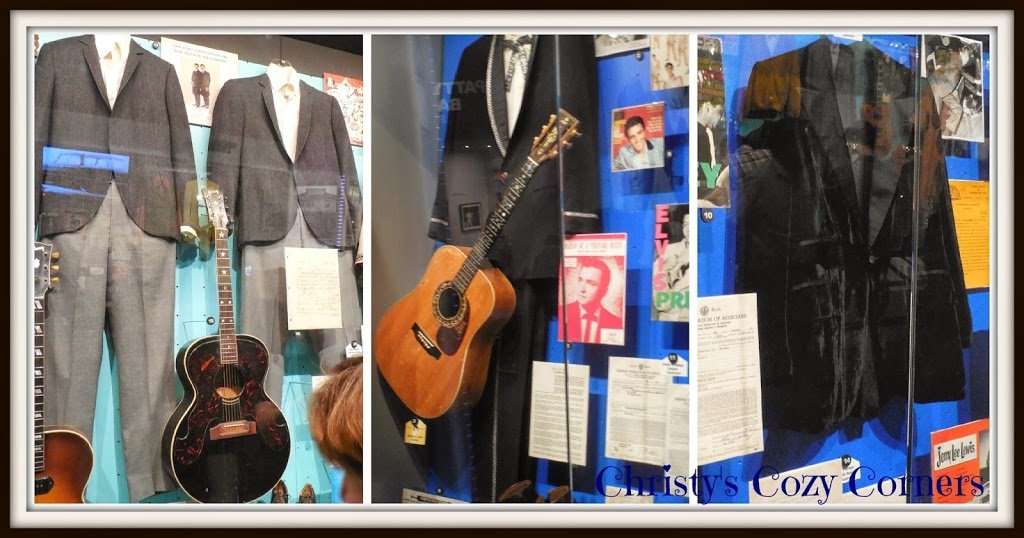 The Everly Brothers, whose suits are pictured in the first photo, were one of my mom’s favorites when she was a teenager. And when my sisters and I were little girls, we would put on her old records and sing and dance around the house. I can remember dancing around to “Wake Up Little Susie” very vividly. The Rock and Roll Hall of Fame also has their tap shoes which their mom bought with shoe ration stamps during World War II.

Johnny Cash’s suit and his acoustic guitar are pictured in the middle. I love the movie Walk the Line. His life story is fascinating and his music is timeless. In the final picture, you can see Jerry Lee Lewis’ jacket.

The number of things to see at the Rock and Roll Hall of Fame is enormous! You can literally spend hours there and not see everything or experience everything. We took so many pictures! You can take pictures of all of the exhibits, but you cannot film anything nor take flash photography. 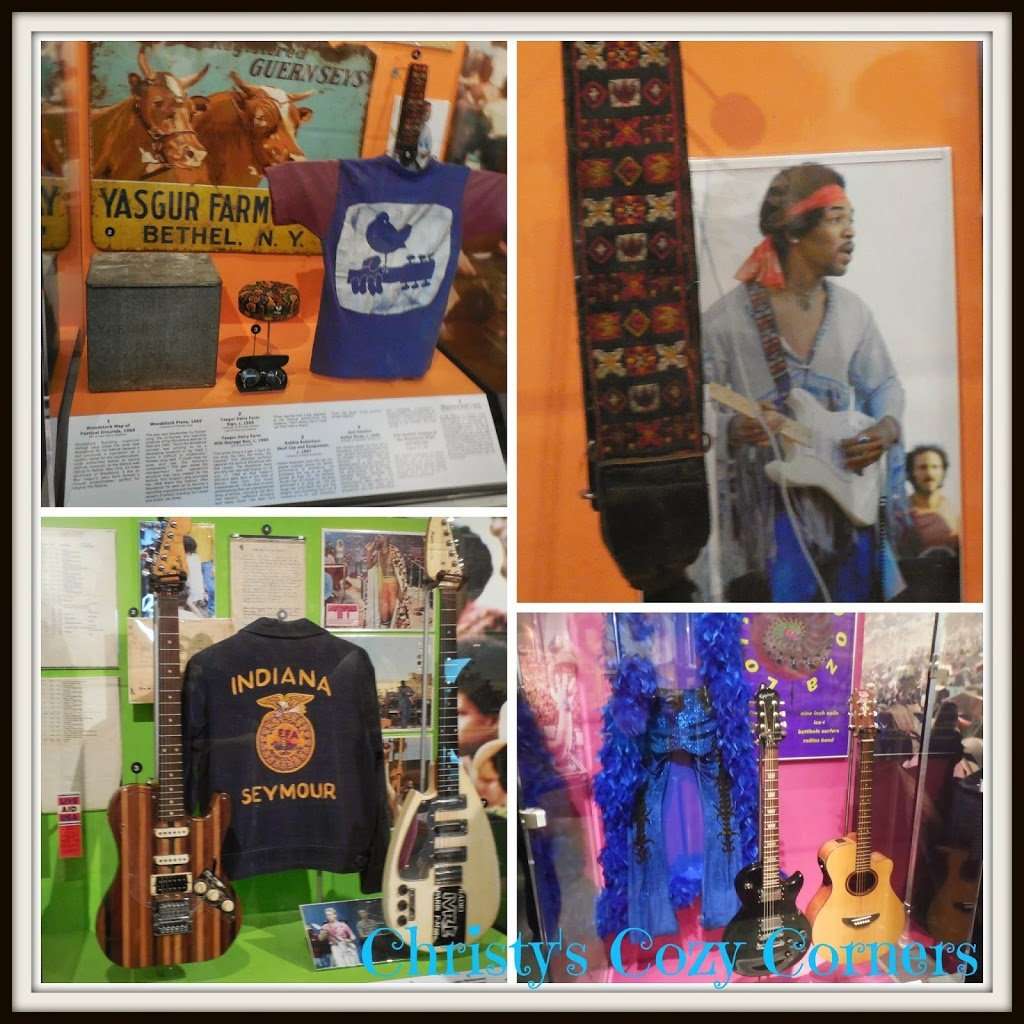 The current featured exhibit at the Rock and Roll Hall of Fame is Common Ground: The Music Festival Experience. It features music festivals and how the whole experience is about so much more than just listening to some bands play.  The pictures above are of Woodstock, Jimi Hendrix’s guitar strap that he used at Woodstock, things from Live Aid, and Lollapalooza. The exhibits change, and you can find out what the current exhibit is by visiting the website. 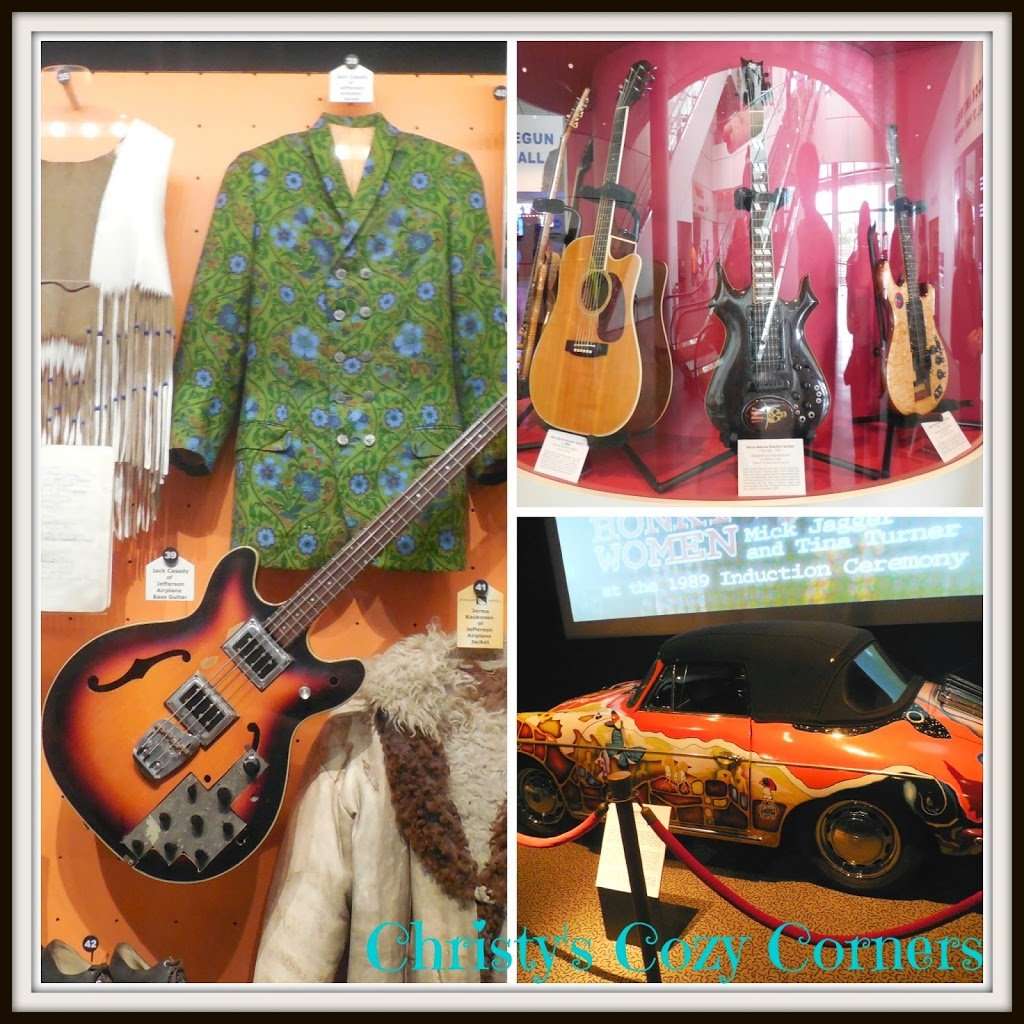 The photos above are of Jefferson Airplane (Jefferson Starship, Starship, whatever…) artifacts, Jerry Garcia’s guitars (if you don’t know who Jerry Garcia is, why are you even looking at this!), and Janis Joplin’s convertible.

The Jefferson Airplane artifacts are found in the Cities and Sounds section of the Rock and Roll Hall of Fame. It’s amazing how different cities had different sounds and influenced different audiences. They were from San Francisco and just listen to White Rabbit to hear how different it is from music that came out of Detroit! 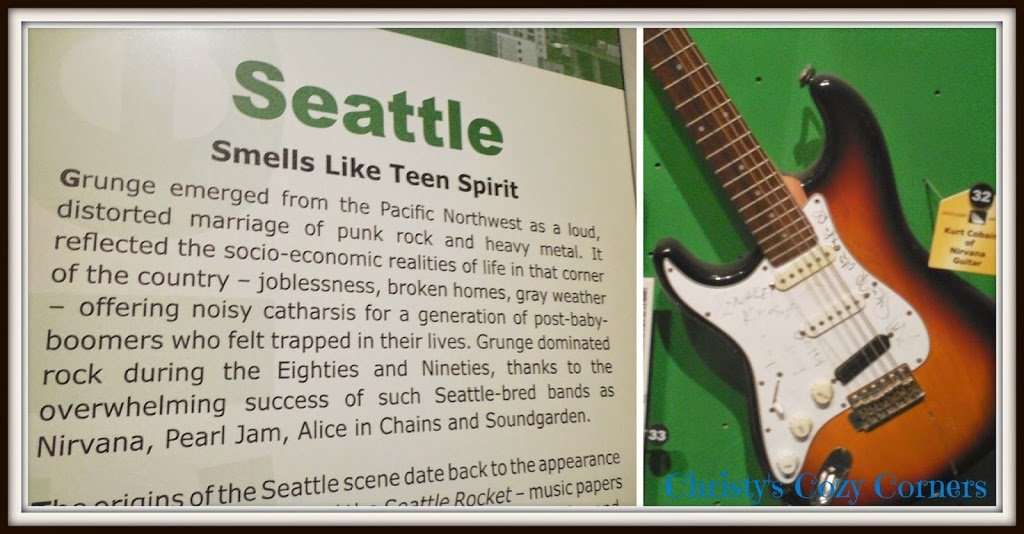 And, though the timeline is later, we have the Seattle sound. Grunge. Nirvana, Pearl Jam, Soundgarden, Alice in Chains. A sound. A style. An end to the boy bands and a beginning of the angst bands. Front man Kurt Cobain wailing out, “Oh well, whatever, nevermind” kind of sums up the entire grunge movement. 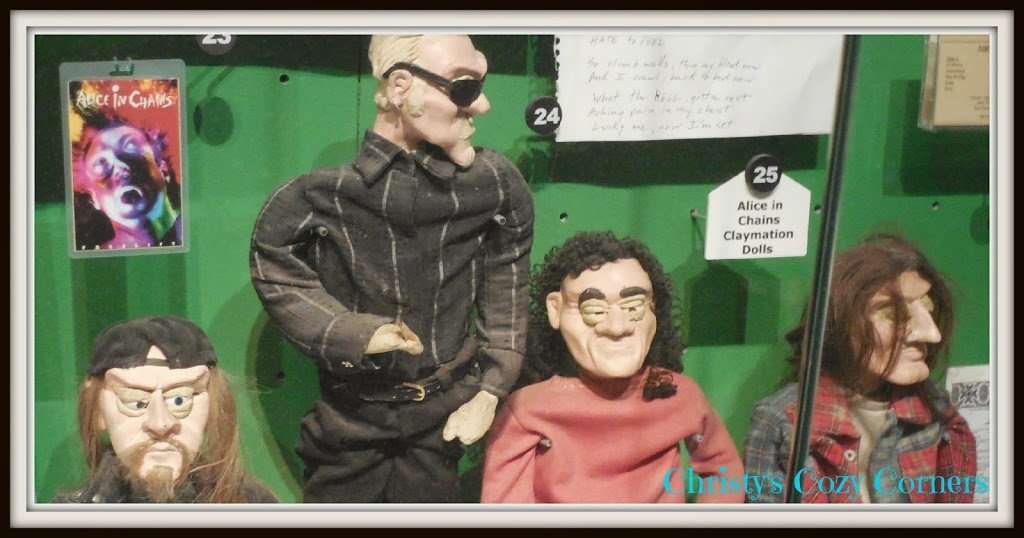 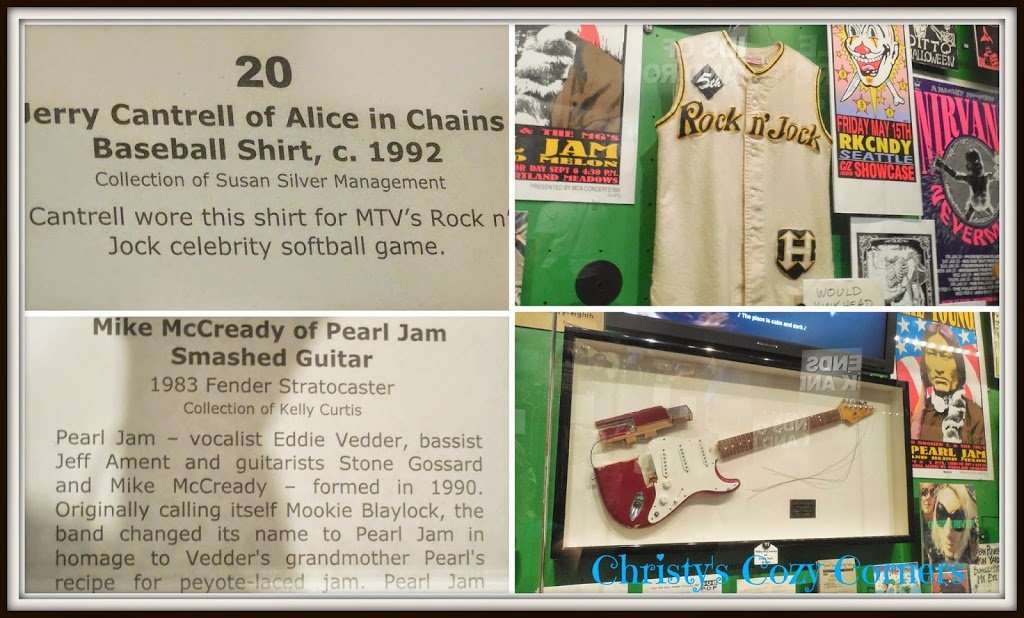 From Alice in Chains Claymation dolls, to a Pearl Jam smashed guitar, the Seattle Sound is well represented at the Rock and Roll Hall of Fame. In fact, Nirvana was inducted into the Hall of Fame this year (2014).

Induction to the Rock and Roll Hall of Fame

In order to be considered for induction into the Rock Hall, a band has to have had their first hit released at least 25 years prior to induction. That makes me feel OLD! Can it be that Bleach, Nirvana’s first album, was really released that long ago? I’m sure that more of these 90’s alternative bands will be before the nominating committee in these next few years.

These bands/artists were inducted in 2014 along with Nirvana: KISS, Linda Ronstadt, Cat Stevens, Hall and Oats, and Peter Gabriel.

You’ve got to visit!

As you can see, the Rock and Roll Hall of Fame has much to offer music lovers. This post could go on and on and on and on….you get the picture. I’ll leave you with a few more collages and leave it at that. This is a must see place. Seriously. What are you waiting for? Go. Just do it! Hours, directions, pricing, pages and pages and pages of music stuff can all be found on the Rock and Roll Hall of Fame’s website. 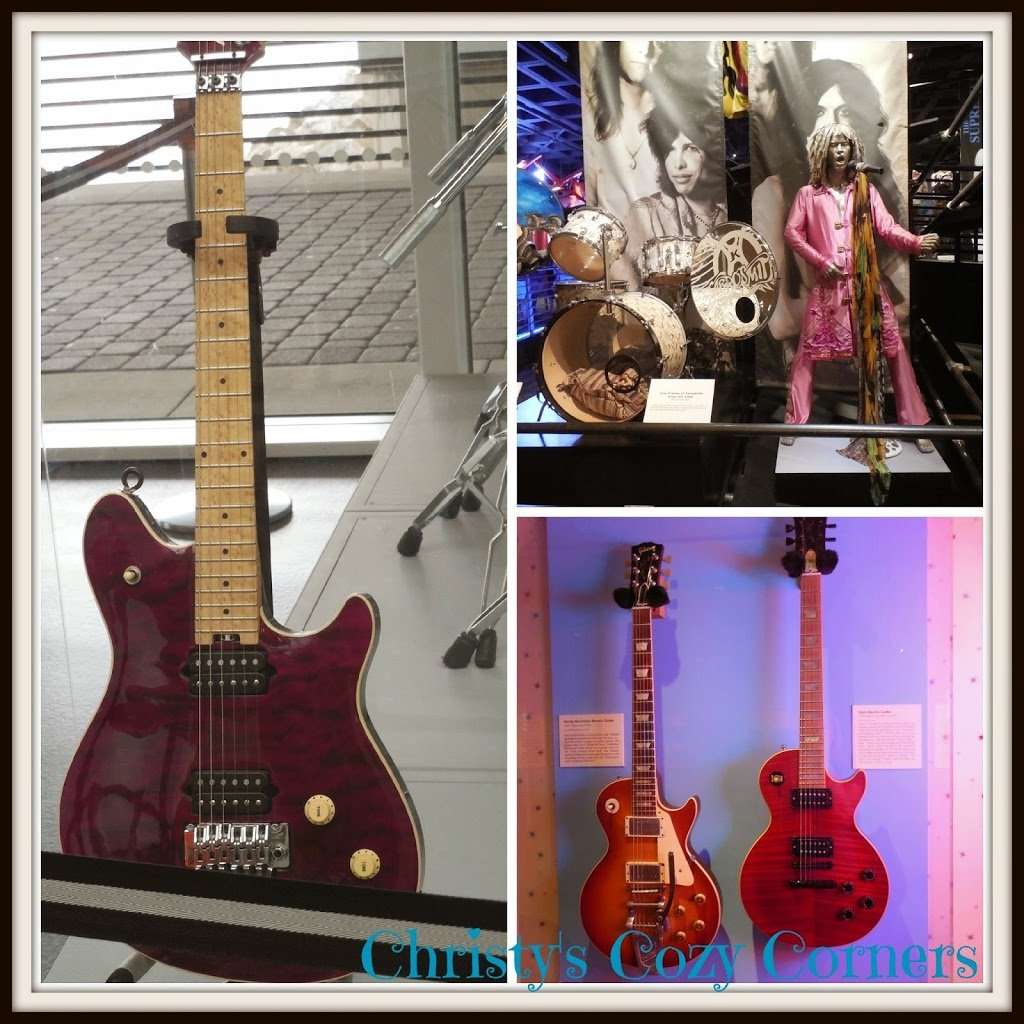 The above picture on the left is Eddie Van Halen’s guitar. The outfit, of course, belongs to Aerosmith’s Steven Tyler, and the drums are Joey Kramer’s. The two guitars pictured together belong to Randy Bachman of Bachman Turner Overdrive on the left and Guns ‘n Roses Slash. Both of the guitars are Gibson Les Paul guitars. There is an exhibit at the Rock and Roll Hall of Fame dedicated to Les Paul’s genius guitar making.

Kyle went through a huge Metallica stage. It was like that was all he’d listen to for awhile. So even though I wasn’t a huge fan in the days when Metallica was big, I became one thanks to constant exposure, you know it’s sad but true! Above you can see James Hetfield’s outfit and guitars as well as the Scales of Justice from their Damaged Justice tour. 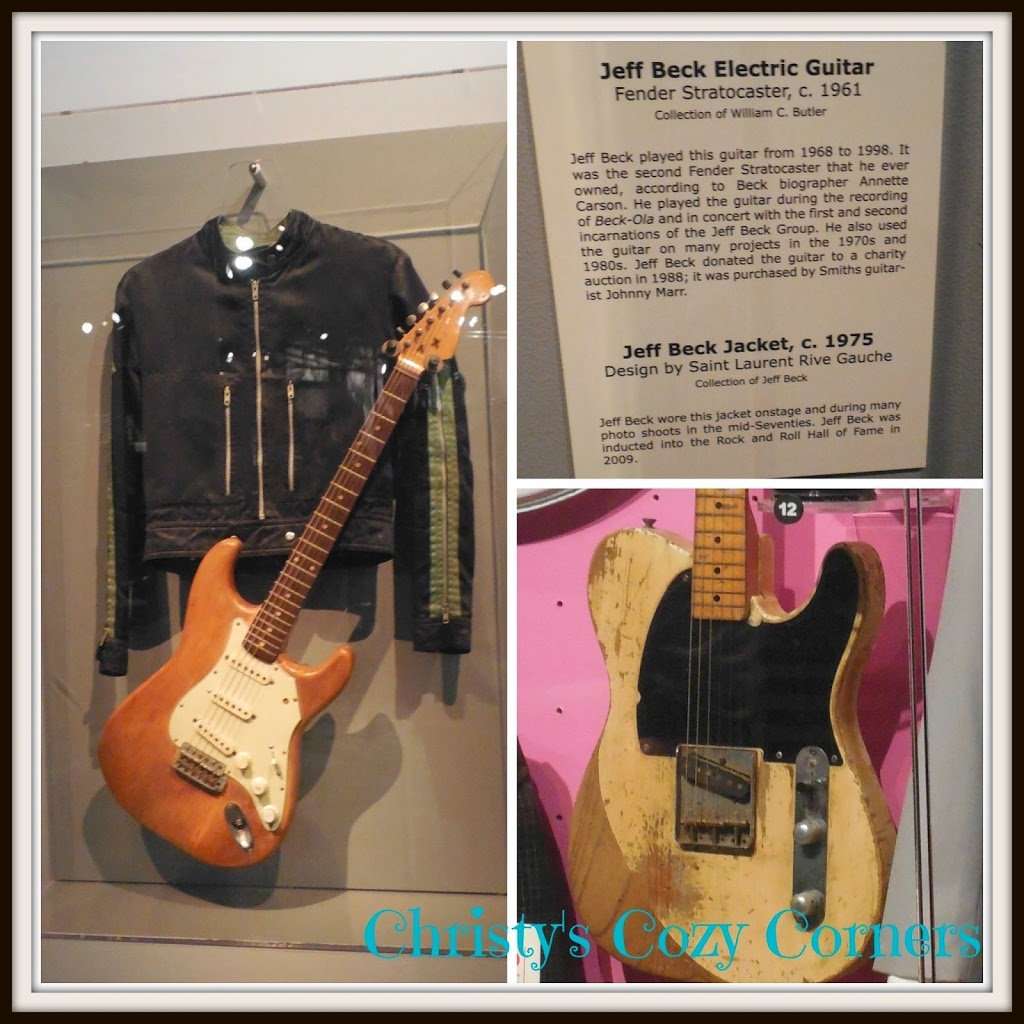 People argue over who the best guitar player of all time is. Well, Jeff Beck is undoubtedly #1 on that list for some folks. In fact, he was voted #5 on Rolling Stones Magazine’s Top 100 Guitarists of All Time and one of the most influential lead guitarists in rock. 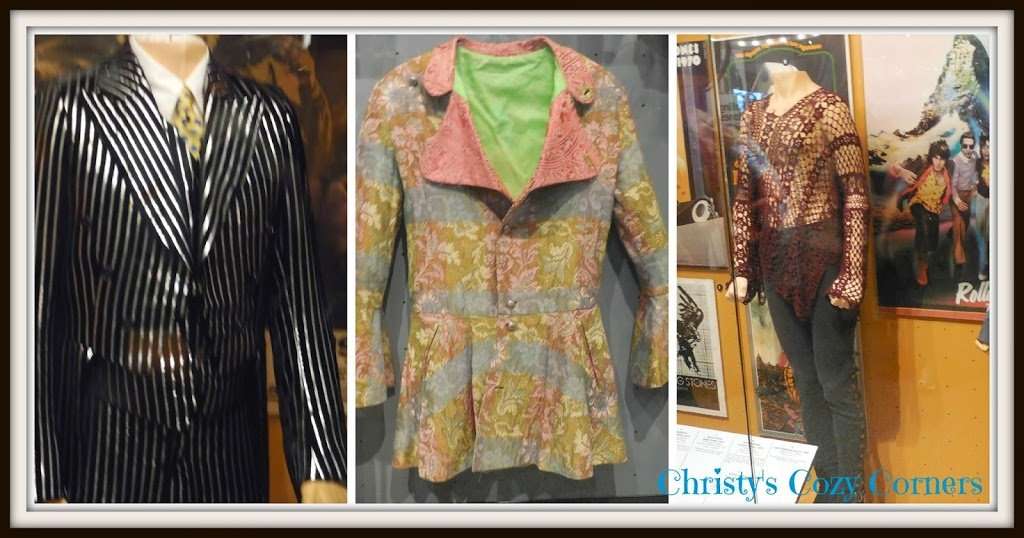 And finally, The Rolling Stones. The pictures above are some of Mick Jagger’s flashy outfits. I saw them in concert several years ago, and they were still as lively as when the first crossed the pond. If you ever get a chance to see them, do it before they get any older!

There you have it! Make plans to visit Cleveland and make plans to spend hours and hours at the Rock and Roll Hall of Fame!

Purchase your tickets online here, and save time!