You are here: Home / Books / Book Reviews / Lycanthor the Werewolf by Aiden Storm | Book Review
Thanks for sharing! 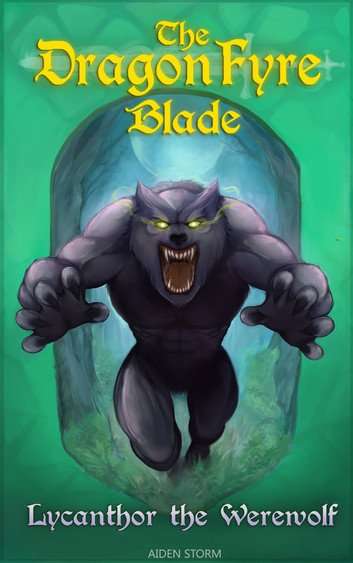 
Thirteen year old Jack is spending the summer at his Aunt’s house in the country. Unfortunately, it’s done nothing but rain and he’s stuck in her old mansion without cable or internet. Bored and alone, he sets out to explore the house. When he reaches the attic, he finds an intricate and unusual mural painted on the walls.
Life for Jack gets turned upside down when he stumbles and is transported through a portal into a magical world.

For Jasyra, the daughter of the High King, life couldn’t be worse. Her father has been turned to glass, her kingdom has been taken over by the Demon Emperor, and she and her friend, Evooku, have been exiled. The only way to save the land is to reassemble the Dragon Fyre Blade, but the Demon Emperor has hidden all six pieces and each is guarded by great mythical beasts. There is only one person who can help restore peace, but it has been said that he is not of their land.

When Jack awakens in the Great Forest of Karandur, he encounters Jasyra and Evooku. He discovers the only way home is to band together to fight the evil Lycanthor, a giant werewolf that guards a piece of the Dragon Fyre Blade. But first they have to make it through an enchanted land full of danger.

The Queen of Light appears to Jack and delivers a gift, as well as a revelation. He, Jasyra and Evooku form an unlikely friendship along the way and lasting bonds are made when they realize they are Karandur’s only hope. Will the trio be able to defeat Lycanthor and save the kingdom from an eternity of despair?

My Review of Lycanthor the Werewolf

I really liked Lycanthor the Werewolf! It was just the right length for the middle grade readers for which it is intended. The action and plot are exciting and imaginative. Children will love reading about how Jack comes to be in another land helping Jasyra find the pieces of the Dragon Fyre Blade. The characters are well written for the length of the book. I read it in less than an hour, and I’m sure middle graders who love to read will devour it quickly as well. This would be a fun read-aloud since the story is interesting enough for parents to enjoy with their children. I recommend it to all lovers of imaginative stories.

If you and your child love imaginative stories, I recommend you read the Jack Templar books too.

Aiden grew up a city boy, but always loved getting out into the country. As a kid, his great uncle always took him to old castles, famous battlegrounds and long hikes in the wilderness. These days, Aiden lives in old cottage next to the forest with his dog Blade. When not writing Aiden spends time exploring the woods, dead certain they’re full of fantastical creatures, long lost relics and ancient magic…