You are here: Home / Books / Book Reviews / Aoleon the Martian Girl Part Four
Thanks for sharing! 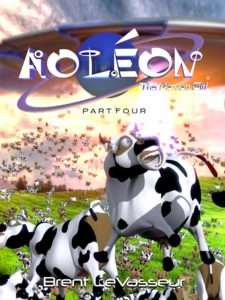 Aoleon and Gilbert have become the Luminon’s top priority in stopping the Martian resistance movement, and after being chased by the Royal Paladin Guard, they are forced to flee the Martian Megalopolis. Aoléon, Gilbert and Zoot escape with the help of Bizwat and his newly found friend, Helios, a first generation soldierbot.

After their saucer is destroyed, they crash land somewhere in the deep Martian desert, and they set out to locate Kyrios and the secret base where Aoleon’s parents are being held captive.

After battling the forces of nature, starvation, a Klyklon dust storm, (and not to mention a giant slor that almost swallows them alive), they finally make it to their destination. However, after Kyrios gives Gilbert some basic training to develop his budding psionic power, they learn that their journey is far from over.

Will Aoléon, Glbert, Bizwat, Helios, and Zoot be able to rescue Aoleon’s parents and stop the Martian invasion of Earth in time?

Read part 4 to find out!

Aoleon and Gilbert are back in part four of this funny, action-packed adventure!  So far, this part of the book is my favorite. There is so much packed into this small part. If you haven’t read parts 1-3 yet, I suggest you do before reading this review.

Aoleon’s parents have been captured, and Aoleon and Gilbert have enlisted the help of Bizwat to get them back. Bizwat picks up Helios, a soldierbot and the adventure begins. The group begins their journey in a saucer, but that is quickly picked up by enemy radar and a fight ensues. They crash in the desert and have to go it on foot. Thankfully they come across some camel-like creatures who carry them part of the way. They find Kyrios who is probably my favorite character in this book. He’s so Yoda like! And he’s hilarious. He helps Gilbert learn how to harness and use his power.

The kids come across the Mars rover in this book. It’s so funny! The NASA scientists are in shock for sure! If you’ve read parts 1-3, you know that the Martians plan on attacking Earth and stealing the cows to get the milk. Will the succeed? Will Earth’s milk be gone forever?

This part of the book ends with another cliffhanger. (Be sure to start with part one when reading this series!) Come back in May to read my review of part five!

The illustrations are a major part of this part of the book as well. They are bright, colorful, and bring the story to life! I definitely recommend this part, as well as the other parts of this book. You’ll laugh and enjoy the adventure.

Mr. LeVasseur enjoys crafting good stories based on lovable characters designed to translate well to multiple media formats such as books, games, movies, and toys. He lives in New York when he is not commuting between Southern California and Olympus Mons, Mars. His hobbies include writing, 3D animation, musical composition, and intergalactic space travel. He also enjoys various sports such as skiing, running, and exospheric skydiving.

Check out the video about Aoleon!

Thanks for sharing!
« Melissa Tagg: Encouragement for Young Writers
Molar in the Mirror and $25 Amazon Giveaway »