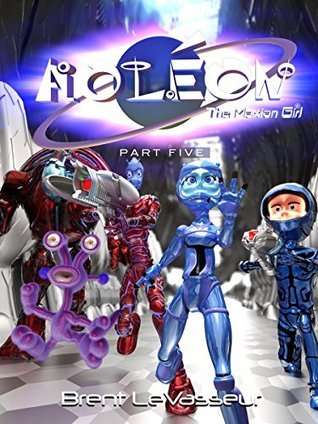 Aoléon, Gilbert, Bizwat, Helios, and Zoot make it to their final destination – Cydonia where Aoléon’s parents are being held captive. They infiltrate a secret underground base and are confronted by a small army of sentrybots.

Bizwat lends Aoléon and Gilbert some of his advanced combat skills via a psionic brain dump. However, this may not be enough to save them from overwhelming hostile forces that will do anything to stop them.

They finally meet Pax – the Martian who originally set them out on the mission to discover the truth about the Luminon and his plans to invade Earth. However Pax is not who he seems to be, and through a turn of events, they uncover the true power behind all that has been happening on Mars.

Will they be able to rescue Aoléon’s parents and save Earth from invasion?
Read part 5 to find out!

Join Aoleon and Gilbert in the conclusion to this exciting middle-grade science fiction and fantasy adventure!

We’ve reached the end of Gilbert’s Martian adventure. When Gilbert first encountered Aoleon in Part One, he could never have imagined all of the excitement and danger he would face with her. In his wildest dreams, he couldn’t have dreamed up all of the characters that he would encounter nor the knowledge he would gain during his time on Mars. Gilbert found that he was so much braver than he could have ever imagined. He found that worrying his parents was a terrible thing to do. And, last, but definitely not least, he learned that cows are kidnapped by Martians for milk….

This whole serial book of Aoleon The Martian Girl is very cute and will be one your middle grade children will enjoy. It is full of fantastical sci/fi adventure and well-written characters. The plot is fast moving and will keep them engaged throughout the entire story. The illustrations bring the story to life. The conclusion wraps up the story well and leaves room for more visits from Aoleon to Gilbert. I highly recommend Aoleon The Martian Girl to young readers everywhere.

Mr. LeVasseur enjoys crafting good stories based on lovable characters designed to translate well to multiple media formats such as books, games, movies, and toys. He lives in New York when he is not commuting between Southern California and Olympus Mons, Mars. His hobbies include writing, 3D animation, musical composition, and intergalactic space travel. He also enjoys various sports such as skiing, running, and exospheric skydiving.

Thanks for sharing!
« Why Florida is the Perfect Getaway Destination
Frankie Dupont and The Lemon Festival Fiasco »