You are here: Home / Books / Book Reviews / Jack Templar and The Lord of the Demons by Jeff Gunhus | Book Review 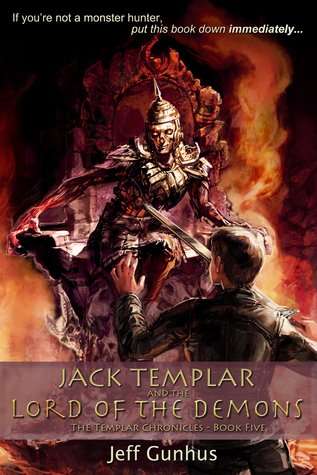 Jack Templar and The Lord of the Demons

With two of the Jerusalem Stones in hand, Jack and his friends must race the clock to find the remaining Stones as Ren Lucre’s Creach forces gather strength. With two of their group now with Creach blood flowing in their veins, the team will be tested as never before. They must unite together if they have any hope of surviving their journey to the Underworld and their battle with the vicious Lord of the Demons. The fate of the entire world hangs in the balance.

My Review of Jack Templar and The Lord of the Demons

Jack Templar Lord of the Demons is the 5th book I have read in this series. He has become one of my favorite authors. This series is so good, and I am not sure why it’s not being talked about everywhere. The characters in these books are so well developed The progression the story takes is so much fun to follow. Jack is still searching for the Jerusalem stones and has to face the Lord of the Demons! Not a fun task…

If you haven’t read the first four books in the series, you are going to want to start with them. Like the Harry Potter or Percy Jackson books, you can’t just jump in with book 5! You won’t have any idea what is going on! To sum up books 1-4 would just spoil it for you. If you read the books, you’d better be prepared to fight monsters because they’ll be coming to get you! When you read the books, they just know. So be prepared!

I really love this series, and I cannot recommend it enough for those of you who have young readers in your house. I’d say ages 10+ would be fine. There is a lot of fun stuff for you and your kids on Jack Templar’s very own website: Jack Templar Monster Hunter.

Jeff Gunhus is the author of the Amazon bestselling supernatural thriller, Night Chill, and the Middle Grade/YA series, The Templar Chronicles. The first book of the series, Jack Templar Monster Hunter, was written in an effort to get his reluctant reader eleven-year old son excited about reading. It worked and a new series was born. His book Reaching Your Reluctant Reader has helped hundreds of parents create avid readers. Killer Within is his second novel for adults.