You are here: Home / Entertainment / TobyMac This Is Not a Test
Thanks for sharing!

Have you heard of TobyMac? That’s a crazy question to ask if you are a fan of Christian Contemporary music right? Who hasn’t heard of Toby Mac?! I mean I grew up in the DC Talk days! 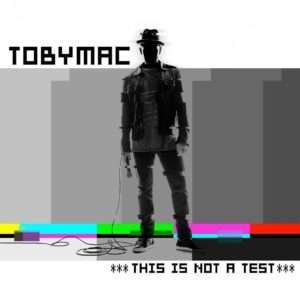 Disclosure (in accordance with the FTC’s 16 CFR, Part 255: “Guides Concerning the Use of Endorsements and Testimonials in Advertising” Many thanks to Propeller Consulting, LLC for providing this prize for the giveaway. Choice of winners and opinions are 100% my own and NOT influenced by monetary compensation. I did receive a sample of the product in exchange for this review and post.

This Is Not A Test

Well, if you are a TobyMac fan…and if you’ve ever heard him, you’re a fan, right?…you are going to love this new album entitled This Is Not a Test. I LOVE it! You’ve probably already heard Beyond Me playing on the Christian radio stations. This entire album is just as good! It is typical TobyMac, and it is amazing. It is uplifting and will have you praising God and singing along.

This Is Not a Test is TobyMac’s 6th studio album to be released.  Starting with dc Talk, and then going solo when the group disbanded, Toby still clings to such rootsy notions as hard work, persistence, patience, and – perhaps most relevant of all – the power of music, which he insists is still what keeps him going.  “It’s the truth,” he says.  “I still believe that a song can penetrate a heart.  I believe God can use a song to open someone’s mind and heart.”

This Is Not a Test releases August 7th and has the following songs on the deluxe album: