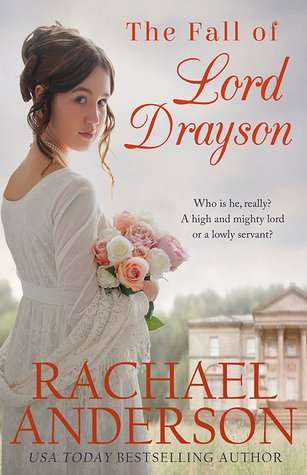 Who is he really? A high and mighty lord or a lowly servant?

When Colin Cavendish, the new earl of Drayson, informs Lucy Beresford that she and her mother need to vacate the house they’ve called home for the past two years, Lucy is fit to be tied. They have no money, no relations they can turn to for help, and nowhere to go. How dare the earl break the promise his father had made to the Beresfords without so much as a twinge of conscience?

Fate plays her hand when Lucy discovers the earl unconscious and injured in the middle of the road. When he awakens with no recollection of who he is, Lucy seizes the opportunity to teach the earl a much-needed lesson in humility and tells him that he is nothing more than a mere servant. Her servant, in fact.

And thus begins the charming tale of a pompous lord and an impetuous young woman, caught together in a web so tangled that it begs the question: Will they ever get out?

I received an ARC of this book free for an honest review which I’ve given.

My Review of The Fall of Lord Drayson

This. This is why I love reading so much. It is books like this that just take you into another era and toss you around for a bit then spit you back out into reality. I love Regency romance books so much, and Rachael Anderson does a wonderful job of creating sizzling romance while keeping it clean.

The way that this book begins is a riot! With Colin losing his memory and Lucy taking advantage of that fact, you can just imagine the hilarity that ensues. The characters in The Fall of Lord Drayson are so realistic, you will feel like they’re your friends or neighbors. Lucy cracks me up. She has not lied in such a long time, so when she begins this farce with Colin, it seems like all of the lies she’s saved up come pouring out in one big event! I love Colin! Talk about swoon worthy! When he finally remembers who he is, he lets Lucy keep thinking he doesn’t know just so he can stay with her. Sigh. Even the minor characters are extremely well-written.

The pacing of this book is just perfect too. It isn’t rushed, and it doesn’t drag on. The romance is just so sweet and funny. I’ve read many books by Rachael Anderson. I don’t know how she keeps doing it! I think this is my favorite one so far. I’m sure I’ll read another and say the same thing! I HIGHLY recommend The Fall of Lord Drayson. You can thank me later.