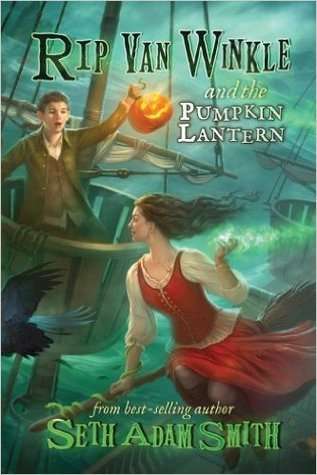 Chased by a vengeful witch, hunted by an undead corpse, and guided by a secretive preacher, a boy must protect a magical lantern that can either save Boston . . . or destroy it.

In October of 1730, young Rip Van Winkle sneaks into a graveyard and comes face-to-face with the ghost of William Blaxton, the first settler of Boston. Warning Rip that the city is in danger, Blaxton gives him a mysterious gift: a pumpkin lantern with power over life and death. Before fading into midnight, the ghost tells Rip to take the lantern to Feathertop, a mythical pumpkin-headed scarecrow.

Pursued by Mistress Hibbins, a witch of terrifying power, and hunted by the nightmarish Midnight Minister, young Rip must rely on the aid of Jonathan Edwards, a stern and secretive preacher, and Nathaniel, a talkative, know-it-all raven. Guided by the magical light of the lantern, Rip races across New England to find Feathertop, save Boston, and become a most unlikely hero!

Rip Van Winkle and the Pumpkin Lantern is a magical allegory that keeps readers engaged throughout. It is targeted toward a younger audience, but it will appeal to older readers who can appreciate the symbolism. With references to characters such as Hester Prynne and real people like Jonathan Edwards, older readers will have an easier time understanding the deeper meaning in the story.

The story starts out with with Rip’s mother having a dream of finding something in the graveyard. When she wakes up, she knows she has to go to the graveyard. She convinces her husband that they have to go. This is where they find Rip in a grave. Rip is a special child with special abilities. He also has a huge heart. His mother and father begin to take in all of the children who come to them. These children become Rip’s family and best friends.

After a tragic event, the story takes a completely different direction into deep symbolism. It is very exciting, but more than an exciting story, it is a story of faith and belief. Rip goes through a series of events that make him ready for the final battle in the story.

The characters in this story are very well-written. This is a really meaningful story that you will enjoy. I recommend reading it with your child and discussing the deeper meaning as you go along.

Thanks for sharing!
« Save on Local Fun with Groupon Things to Do
Life in the Danger Zone Release Day Celebration »