You are here: Home / Books / Book Reviews / Tales from the Arabian Nights Stories of Adventure, Magic, Love, and Betrayal
Thanks for sharing! 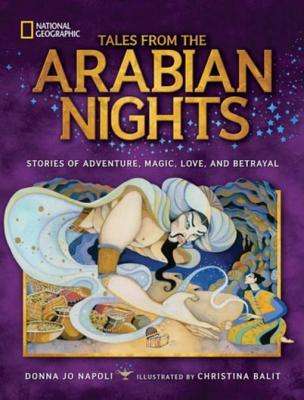 Classic stories and dazzling illustrations of princesses, kings, sailors and genies come to life in a stunning retelling of the Arabian folktales from One Thousand and One Nights and other collections, including those of Aladdin, Sinbad the Sailor, and Ali Baba and the Forty Thieves. In this beautiful, gift-worthy book, beloved author Donna Jo Napoli not only brings these timeless tales to life but also includes sidebars that connect the stories to history, culture and geography.

I’m sure we have all heard of the tales of the Arabian nights. But though we have heard OF them, have we HEARD them? Maybe Aladdin, right? But probably the Disney version 🙂 Though there are many more, this book shares 25 tales from the Arabian nights. Some of the stories go back to ancient times. They are amazing!

The way that the author has chosen which stories to tell shows the relationship between the wife, who is telling the stories, and her husband who may or may not grant her another day to live. They are fascinating which is, of course, why he lets her keep living to tell her tales.

You will love reading this as much as your child will enjoy being read to. And I do recommend reading them together! There are little sidebars of fascinating information added to this book that make it that much more interesting. This book is definitely worth sharing with your child.

Donna Jo Napoli is both a linguist and a writer of children’s and YA fiction.

Donna Jo has five children. She dreams of moving to the woods and becoming a naturalist. She loves to garden and bake bread.

At various times her house and yard have been filled with dogs, cats, birds, and rabbits. For thirteen years she had a cat named Taxi, and liked to go outside and call, “Taxi!” to make the neighbors wonder. But dear dear Taxi died in 2009.

She lives outside Philadelphia. She received her BA in mathematics in 1970 and her Ph.D. in Romance Languages and Literatures in 1973, both from Harvard University, then did a postdoctoral year in Linguistics at MIT. She has since taught linguistics at Smith College, the University of North Carolina at Chapel Hill, Georgetown University, the University of Michigan at Ann Arbor, and Swarthmore College. It was at UM that she earned tenure (in 1981) and became a full professor (in 1984).

In the area of linguistics she has authored five books (one of which is being translated into Korean), co-authored four (one of which is in Italian), edited one, and co-edited four (with a fifth in press), ranging from theoretical linguistics to practical matters in language structure and use, including matters of interest to d/Deaf people. She has held grants and fellowships from the National Science Foundation, the National Endowment for the Humanities, the Mellon Foundation, and the Sloan Foundation.

Thanks for sharing!
« Order a GrandBox for Grandma and Grandpa Today
Christmas Love Letters from God »