Escape to Stony Point, cuff your jeans and walk along the water’s edge in this nostalgic story bringing old friends, and their lives, back to the sea. And enjoy Blue Jeans and Coffee Beans. 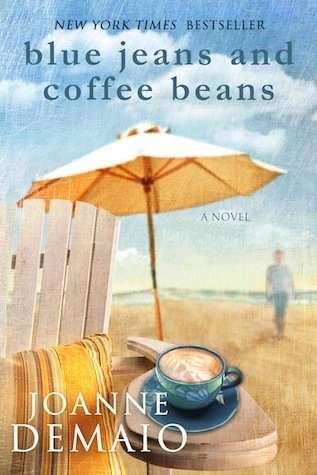 After years of pursuing a denim design career, Maris Carrington never imagined trading her Chicago studio for a New England shingled cottage. But a forgotten home movie tucked inside a dusty attic box leads to an unexpected summer … One of uncovering family secrets while settling her father’s estate, one of inheriting a forlorn German shepherd, one of reconnecting with old friends on a weathered boardwalk, beneath starlit skies on a beach nestled in a crook of the Connecticut coast.

Her design career had become a shell, curving around her like the intricate whorls of a conch, shielding her until now. Until fried clam dinners and carousel rides beckon a lost love. But can Maris ever really go back? Can these beach friends ever be who they were to each other all those summers ago? Now one of her circle is dead; another unemployed and struggling in a tenuous marriage; another regretting a fateful decision; while one is missing a mother, ever seeking a connection she longs for.

To the backdrop of seaside cottages and a boarded up beach hangout, to the soundtrack of whispering lagoon grasses and a vintage jukebox, Blue Jeans and Coffee Beans asks if we can really design our own lives, or if our fate lies somewhere in the stars.

My Review of Blue Jeans and Coffee Beans

This is the third book I’ve read by Joanne DeMaio. I absolutely adored Wishing on Snowflakes which contains 2 of her books: Snowflakes and Coffee Cakes & Snow Deer and Cocoa Cheer. I liked this one, but not as much as those two. Christmas and winter books are my favorites. It was written before those as well, so I think Joanne’s writing has become more polished since Blue Jeans and Coffee Beans.

What I really liked about this book was the setting. I love the beach and wish I lived closer to one! I have been to Connecticut and visited the Long Island Sound one summer. It is so beautiful, but if you’re used to sandy beaches, you’re in for a shocker like I was! The beaches are mostly tiny pebbles with some sand. I’d still live there though…it IS the beach after all.

Blue Jeans and Coffee Beans focuses on several friends and how their relationships have been intertwined since their teen years….some longer. I thought that the story flowed well, though it did seem a bit slow in some places. Overall, the stories fit together well. However, I kind of wish that Kyle and Lauren’s story would just have been its own. I didn’t get enough to feel emotionally involved. Their story could have been the most interesting if it had been given its own book.

Joanne’s writing style is present tense third person, so it does take a little getting used to. Since I’d read her later books first, I knew the feel of her writing already. I think the Christmas themed books are more polished. However, I did like this one and how it turned out in the end. I still recommend starting with Wishing on Snowflakes because I like the stories more, and it will give you a chance to get to know Joanne’s writing style.

Thanks for sharing!
« The Innkeeper of Ivy Hill Book Review
The Magic Kingdom and Epcot in One Day »