Disclosure: I received a copy of A Name Unknown from Bethany House free for review. All opinions are mine. 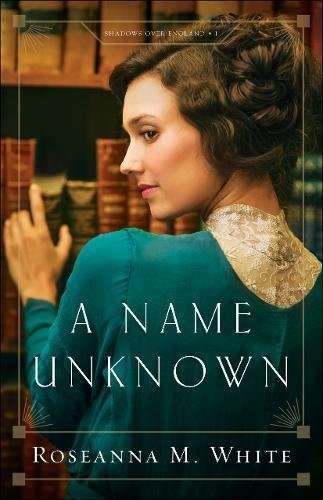 Edwardian Romance and History Gains a Twist of Suspense

Rosemary Gresham has no family beyond the band of former urchins that helped her survive as a girl in the mean streets of London. Grown now, they concentrate on stealing high-value items and have learned how to blend into upper-class society. But when Rosemary must determine whether a certain wealthy gentleman is loyal to Britain or to Germany, she is in for the challenge of a lifetime. How does one steal a family’s history, their very name?

Peter Holstein, given his family’s German blood, writes his popular series of adventure novels under a pen name. With European politics boiling and his own neighbors suspicious of him, Peter debates whether it might be best to change his name for good. When Rosemary shows up at his door pretending to be a historian and offering to help him trace his family history, his question might be answered.

But as the two work together and Rosemary sees his gracious reaction to his neighbors’ scornful attacks, she wonders if her assignment is going down the wrong path. Is it too late to help him prove that he’s more than his name?

My Review of A Name Unknown

I loved this book! A Name Unknown is exciting from beginning to end. I love the characters so much!

Rosemary’s family survives the harsh streets of London by working as thieves, so when Rosemary is hired by Mr. V to steal a family history for $1000 pounds, she doesn’t hesitate. She figures that she will find the incriminating evidence and be on her way. What she doesn’t figure on, is how Peter and his household and town will work their ways into her heart. They change the way she sees the world.

Her job is a difficult one, but she manages to find the information Mr. V needs from her…but it isn’t what she expected. She also doesn’t expect to be treated so kindly by people who she has always thought would think themselves above her. Even when her true identity is revealed, she is treated in an unexpected way.

Rosemary learns about faith during her stay in Cornwall as well. She’s always felt that God had nothing good for her…that He didn’t answer her prayers. She finds that when God seems silent, He is still working.

A Name Unknown has so many amazing characters that are full of depth and are extremely realistic. The plot is intriguing and the pacing is perfect. I highly recommend this book to historical romance lovers.

Thanks for sharing!
« Therabis Calm and Quiet for Dogs Can Help Reduce Separation Anxiety
Get your Kitty Weruva for Happy Healthy Cat Month in September »