You are here: Home / Books / Cardinal Cabin by Joanne DeMaio
Thanks for sharing!

I received this book free for an honest review which I’ve given. 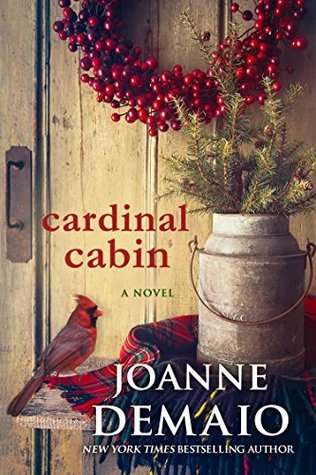 Frank Lombardo’s never been spontaneous. The closest he’s come was accepting a side job chopping firewood for a lakeside community of rustic cabins. But with another lonely holiday season imminent, Frank’s sister urges him to be spontaneous because, seriously, who does he ever expect to meet out in the woods?

With a suitcase in hand and a bit of reluctance, too, Penny Hart arrives at Cardinal Cabin on Snowflake Lake. It’s only for a brief stay, though nobody knows where she is. Not her boss, not her friends…

Only Frank Lombardo. As the two unexpectedly meet at Addison’s hidden hideaway, a spontaneous kiss sets everything amiss. But can the magic of this quaint New England town keep these snowy sweethearts together?

Cardinal Cabin is an enchanting tale about finding love where you least expect it. So come on inside. A cozy fire crackles, lights twinkle on the evergreen tree, snowflakes tap at the windowpanes, and little redbirds bring cheer this time of year.

I adore Christmas and winter books. I’ve read the two other books by Joanne that are set in Addison Cove, the same sweet New England town ins which Cardinal Cabin takes place. This is completely a stand-alone, but I highly recommend you read Wishing on Snowflakes too which contains the two other Christmas books: Snowflakes and Coffee Cakes & Snow Deer and Cocoa Cheer. Some of the characters from those books show up in Cardinal Cabin.

I love reading a book that feels like home, and Cardinal Cabin fits the bill. It is cozy (hmm, who would have thought I like cozy things…), fun, romantic, and sweet. The characters in Cardinal Cabin are very well written, and I want to be Penny. Just putting that out there. Her assignment for work is to keep the readers guessing. Each day she sends a new photo to her workplace, a travel agency, and at the end of her trip, the readers get to guess where she is. Little do they know that she is closer than they think.

Addison Cove feels so real, and I so want to take a trip to stay in Cardinal Cabin! When you read the book, I’m sure you’ll feel the same way. And if you know of a place like this, please send me there. Maybe I’ll meet my Frank too.

I highly recommend this along with Wishing on Snowflakes. You’ll fall in love with the town and the characters. Happy reading!

Thanks for sharing!
« 7 Fun Things to Do When You’re Bored
Adopt-a-Dog Month & RESCUED: What Second-Chance Dogs Teach Us »