You are here: Home / Books / Dead in the Water by Denise Swanson
Thanks for sharing!

I received a copy of Dead in the Water free for review. All opinions are mine. All posts may contain affiliate links.

Dead in the Water 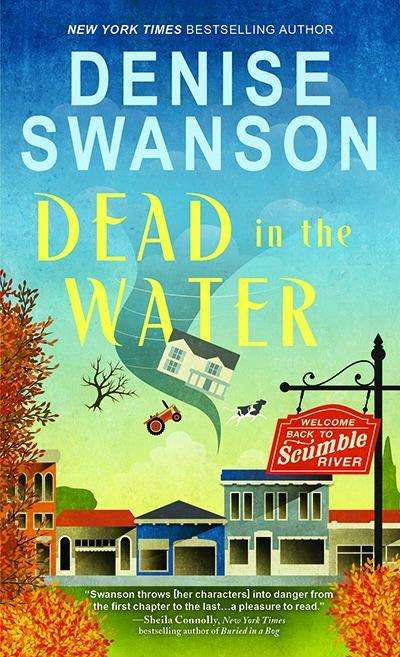 Welcome Back to Scumble River

The first book in her Welcome Back to Scumble River series finds a very pregnant school psychologist and amateur sleuth Skye Denison-Boyd salvaging what she can after a tornado rips through town and destroys her house.

When the body of Zeke Lyon, the town’s mild-mannered bookkeeper, is found amid the rubble, it’s assumed he was a victim of the tornado. But some of the details don’t add up…

When Skye starts to dig into the mysterious death, her police chief husband, Wally, goes missing and she’s convinced he’s been kidnapped. Will she be able to solve the case and find her husband before it’s too late?

Featuring a short quote from the Wizard of Oz at the beginning of each chapter, Dead in the Water takes readers on a whirlwind investigation in their beloved Scumble River.

My Review of Dead in the Water

I loved this book. I have never read the Scumble River series, but I didn’t feel lost at all. I’m sure that those of you who are already fans of Denise Swanson’s Scumble River books will be a little more informed about past town events, but if you’re like me, just jump on in. You’ll get to know and love the characters quickly. This is a super easy book to read in a day or two because it is a lot of fun.

For some reason, I love disaster books. Give me a good blizzard (The Long Winter) or a solar flare that shuts off all electronics (The Restoration Series), and I’m happy. Disaster movies fit into that category too. Dead in the Water is sort of a disaster book because a tornado has wiped out much of Scumble River and Skye and Wally are homeless…until Wally’s rich dad steps in and sends them an RV to stay in.

The tornado and subsequent events make for a crazy ride. With quirky characters and a plot that will keep you guessing, Dead in the Water is a winner!

Full disclosure: There is quite a bit of swearing in the book. If you’ve read the author’s previous books, maybe you’re already aware of this. I didn’t expect that much from a cozy mystery. I like sharing my books with my mom when I’m finished, but I won’t be able to share this one. She just wouldn’t appreciate all of the language. That is the only downside to this. If you like your cozies squeaky clean, this isn’t.

Praise for Dead in the Water

Publishers Weekly recently reviewed Dead in the Water, and said “Based on this delightful entry, this cozy series should have a long, bright future.”

“It’s a pleasure for Swanson’s readers to welcome back her Scumble River characters, even though she throws them into danger from the first chapter to the last. A tornado, a corpse and a kidnapping make life in Scumble River challenging for Skye Denison-Boyd as she awaits the birth of her first child, but fans of Swanson’s series know she can handle it all. Swanson’s strongly drawn characters and vivid descriptions make this welcome return of her Scumble River series a pleasure to read.” —Sheila Connolly, New York Times bestselling author of Buried in a Bog

Denise Swanson is the New York Times bestselling author of the Scumble River Mystery and Deveraux’s Dime Store Mystery series. She has been nominated for RT Book Review’s Career Achievement Award, the Agatha Award, and the Mary Higgins Clark Award.

Thanks for sharing!
« 3 Reasons to Use FotoJet Premium
Dietary Tips for Treating Eczema Effectively »