October is Adopt-a-Dog Month. If you have a dog, you know how much joy they bring into your life. I am a huge advocate for rescuing animals. I’m sure you’ve heard the adage, “Adopt! Don’t Shop!” It is so important! 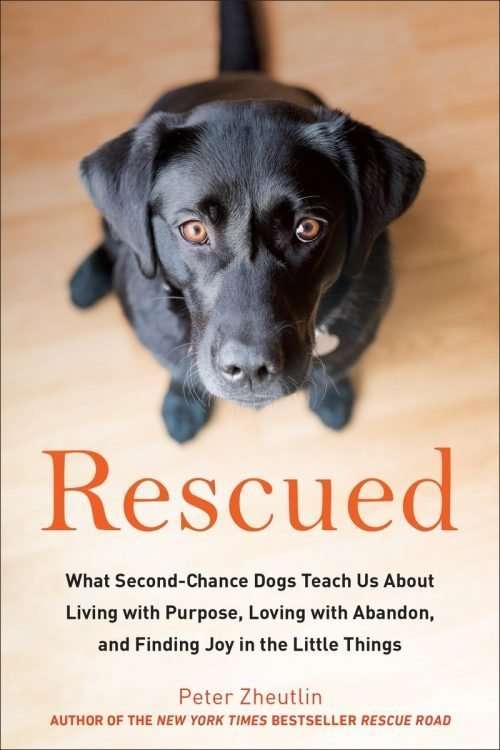 Rescued: What Second-Chance Dogs Teach Us

RESCUED: What Second-Chance Dogs Teach us About Living with Purpose, Loving with Abandon, and Finding Joy in the Little Things.

Rescued is a delightful follow up to Rescue Road, which spent five consecutive months on the New York Times bestseller list.

RESCUED is NOT one of those clichéd “who saved who” accounts (though we all love those too). Zheutlin interweaves heartwarming and humorous stories, lessons, and advice from countless families who have welcomed second-chance dogs into their homes and the transformative effect of these adoptions.

Peter Zheutlin discusses the enormous canine overpopulation challenge in the American South, the selfless rescue volunteers that pull at-risk dogs from high-kill shelters and transport them to the North, and the enormous rewards of being part of the solution by adopting a second chance dog.

Rescued is a book for dog lovers and non dog lovers alike. It will make you laugh, and it will make you cry. In fact, you’ll do both at the same time. Peter Zheutlin just tells it like it is. He doesn’t sugar coat dog ownership (or life in general). I love how the general thought throughout the book is the same. “Why adopt a rescue dog? It gives your life meaning.” If you’ve ever rescued a dog, you know.

The author talks about his own rescue dog, Albie, while interspersing stories about other rescue dogs. He talks about separation anxiety. I know all about that. Our rescue dog has it in spades. He doesn’t even like to be in a different room, and he was very young when we got him. Who knows what he went through his first months of life. I know it couldn’t have been as rough as some of the dogs in Rescued, and it breaks my heart hearing their stories. But to hear how amazing their lives are now…priceless.

Rescued is a book you have got to read. Dogs teach us so much. I love the tagline for Rescued: What Second-Chance Dogs Teach Us About Living with Purpose, Loving with Abandon, and Finding Joy in the Little Things. Yes.

So this month, Adopt-a-Dog month, go rescue a dog. Volunteer at a shelter. Donate a bag of food. Whatever you can do, do it.

Q & A plus an excerpt

The publisher shared a list of questions and answers from the author, and though I wish I could share them all, this post would be way too long! I’ve chosen one that goes along with the excerpt I’m sharing with you too. I think it is so cute! 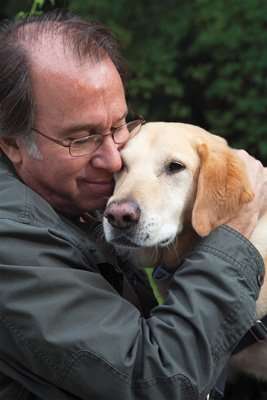 Your wife Judy wanted to have a dog since the very beginning of your nearly 30 year marriage, but you didn’t welcome your first rescue, Albie, into your home until you were about to become empty nesters. Why the wait and what made you finally decide to adopt? Why did you choose a rescue dog from Louisiana rather than a dog breeder or pet store?

I’m kind of Mr. Fussy around the house and the thought of a dog shedding everywhere and running across the carpets with muddy paws appalled me. So did the idea of walking a dog on sheets of ice at 6 a.m. on freezing February mornings so it could do its business. Judy and the kids promised they’d help, but I am suspicious of such promissory notes. What changed my mind was that with the kids grown I didn’t feel ready to be done nurturing.

When Judy suggested adopting a rescue dog I had no idea what she was talking about. The image that leapt to mind was a St. Bernard with a whiskey barrel under its neck combing through snow for avalanche survivors. Once I learned there are literally millions of dogs out there in need of homes, dogs on death row in high kill shelters, it was a no-brainer to choose a rescue dog.

Excerpt: Home is Where the Dog Is

Adapted with permission from RESCUED: What Second-Chance Dogs Teach us About Living with Purpose, Loving with Abandon, and Finding Joy in the Little Things by Peter Zheutlin. © 2017 by Peter Zheutlin. TarcherPerigee, an imprint of Penguin Random House.

When a dog is willing to sit for hours and stare out the window waiting for you to come home, it’s safe to say he is now bonded to you as if with superglue. And there’s no denying how flattering that can be. Albie’s growing attachment to us, which manifest in part in his desire for physical contact, brought me right back to the days when my boys, then toddlers, would fall asleep on my shoulder or chest and everything seemed right with the world.

Though his affection for us was growing, in those early weeks Albie continued to sleep under the coffee table in the living room and refused to come upstairs. Until he was comfortable everywhere in our home, until he was no longer fearful of what might lie at the other end of the stairs, I didn’t think he would truly be home for home implies that place where we feel safest and most secure. Home isn’t just where we keep our things, eat our meals and hang our hat. Home is, or should be, a place where we belong, where we are loved unconditionally, and where we are comforted. Is there a word in the English language more evocative, and more comforting, than home?

I wasn’t sure how we would know when Albie finally felt he had found his home, whether he would send us a signal, whether there would be a eureka moment, or whether it would be a process so gradual we might never even notice until after the fact. All I could do is watch and wait.

Then, one evening, I couldn’t find him. I knew he was in the house and our downstairs only comprised five rooms, easy to check in half a minute. I called him, but no response. Could he be upstairs at last? I climbed the stairs and made the right turn into our bedroom. And there, curled up on our bed, was Albie.

I’ll never forget the plaintive look in his dark brown eyes and the uncertain expression on his face. He seemed to be asking, “is this okay?”

I had come a long way just agreeing to have a dog, but I had vowed “no dog in the bed.” One look in his eyes and I knew he was not only home but, if he so chose, in the bed to stay. We had earned his trust and his love. It was by his literal and figurative leap of faith into our bed that he told us he, too, knew he was home.

Different dogs may express this in different ways, and for some it may not come in one crystallized moment, but be alert for it because no moment with your rescue dog will be more precious or more satisfying than the one when he or she tells you, “I’m home.” Whether you realized it or not when you decided to adopt a rescue dog, this was your purpose all along.

In 2009, Elissa and Susan adopted a seven-year-old yellow Lab mix named Addie. She’d been used to produce multiple litters of puppies, likely for sale, in a backyard in Arkansas and when she stopped breeding she was dumped by her human family at a high kill shelter. Though she had a liver condition and was overweight, Elissa and Susan, who found her online, were smitten and gave her a home. (Sadly, Addie died just a few weeks before Elissa and I spoke in mid-summer of 2016.)

“When we adopted Addie I wasn’t working at home full time, so we took ten days off to get her used to our house and the neighbors and their dogs,” Elissa told me. “On the third day we decided to go out and leave her alone for just a short time, about fifteen minutes, to see how she would do. She was a little panicky when we left, but we didn’t feel like she needed to be in a crate. We weren’t worried about that.”

When they came back, there on Addie’s bed in the living room was a pair of sunglasses, a sweater, a garden boot and the television remote. Addie had spent her time alone gathering items of Elissa’s and Susan’s and placing them, unharmed, on her bed. Another day, Elissa said, “we came home and there she was on her bed with a bottle of wine and the phone.” Addie had pulled the bottle from an open case on the floor. To Elissa and Susan this was their sign that Addie was home.

Whether it’s a specific moment, or a gradual process, a dog’s “homecoming” is one of the great joys of rescuing a second-chance dog. You finally feel you can count on and trust them — to be faithful, to not run away, to be responsive to you in ways they are not with others. And they know they can count on you — to comfort them when they are scared, to feed them when they are hungry, to rub their bellies when they want affection. It’s the moment when the dog is no longer a stranger in your midst, but a member of the family. 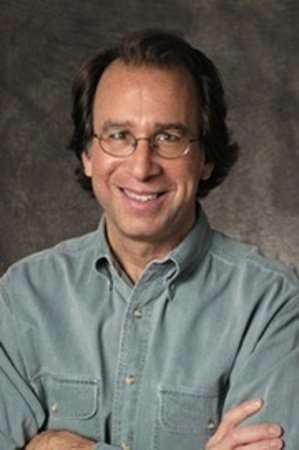 PETER ZHEUTLIN is a freelance journalist and bestselling author based in Dover, MA, whose work appears regularly in national publications, including The Boston Globe and The Christian Science Monitor. Zheutlin has also written for The LA Times, Parade Magazine, AARP Magazine and numerous other national newspapers and magazines.

He is the author of the New York Times bestseller, Rescue Road: One Man, Thirty Thousand Dogs and a Million Miles on the Last Hope Highway, as well as one other book. He lives in Massachusetts with his wife, author Judith Gelman, and two rescued Labradors. Learn more at www.PeterZheutlin.com.