You are here: Home / Books / Clean Romance Books by Janette Rallison
Thanks for sharing!

How I Met Your Brother by Janette Rallison

Back in college, Marco Dawson never thought of Belle as anything more than a friend. If she had crossed his mind on his wedding day, it was probably only to wonder why she hadn’t shown up to be a bridesmaid. After all, his new wife was her old roommate. Seven years have passed since then, and Belle just found out that Marco is divorced and vacationing with his family in an elegant Cancun resort. She’s not about to let the right man get away twice. She heads to the resort where she plans to casually bump into Marco and ignite some romantic flames.

But Belle hadn’t planned on one thing: Flynn Dawson, Marco’s handsome, charming, and determined twin brother. He thinks Marco and his ex-wife can make amends and he’s not about to let Belle stand in the way.

Part Sabrina, part While You Were Sleeping, romantic comedy readers will eat this book up!

“Dawson,” she called in feigned surprise. “Is that you?”

He looked up from the map and his blue eyes wandered over her. “Yes.” He must have liked what he saw because a smile appeared on his lips. Not a smile of recognition, just a smile of approval.

She sauntered over, taking slow nonchalant steps. “Don’t tell me you don’t remember me. I haven’t changed that much, have I?”

His lack of recognition should have bothered her a little, but it felt like victory. Proof the mousy unnoticeable girl she’d been was gone. “Perhaps you recall a study group we were in at WSU? Or the fact that I proofread a lot of your papers? You obviously don’t remember telling me that you’d never forget me.”

“Ah,” he said, with understanding. At least now he knew she wasn’t a stranger with a creative pickup line.

“Perhaps you remember me introducing you to Daisy?”

His eyes widened and his expression changed. She couldn’t quite read it. Was it astonishment? Disbelief? Regret? “Isabelle,” he uttered.

She smiled at the way her name sounded on his lips. “I go by Belle now.”

His gaze went over her a second time, stopping on her ring finger—absent of the symbols of marriage. “What a surprise. I don’t know what to say.”

“Most people say something along the lines of ‘It’s good to see you.’ But I’ll settle for a belated, ‘Thanks for all those papers you helped with.’” 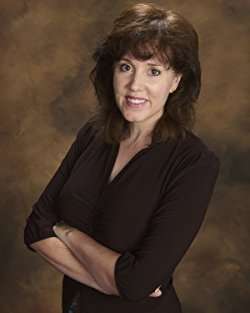 Janette Rallison is old. Don’t ask how old, because it isn’t polite. Let’s just say she’s older than she’d like to be and leave it at that.

Janette lives in Chandler, Arizona with her husband, five children and enough cats to classify her as “an eccentric cat lady.” She did not do this on purpose. (The cats, that is; she had the children on purpose.) Every single one of the felines showed up on its own and refuses to leave. Not even the family’s fearless little Westie dog can drive them off.

Since Janette has five children and deadlines to write books, she doesn’t have much time left over for hobbies. But since this is the internet and you can’t actually check up to see if anything on this site is true, let’s just say she enjoys dancing, scuba diving, horseback riding and long talks with Orlando Bloom. (Well, I never said he answers back.)