You are here: Home / Entertainment / Watch Captain America: The First Avenger this Week to Prepare for #InfinityWar
Thanks for sharing!

Yes, I am #TeamCap and always will be. You know I love the IRON MAN movies, but Tony has nothing on Steve. If you’ve been keeping up with my Marvel Movies to watch before INFINITY WAR and have your handy dandy printable movie list, you know this week it’s all about CAPTAIN AMERICA: THE FIRST AVENGER. 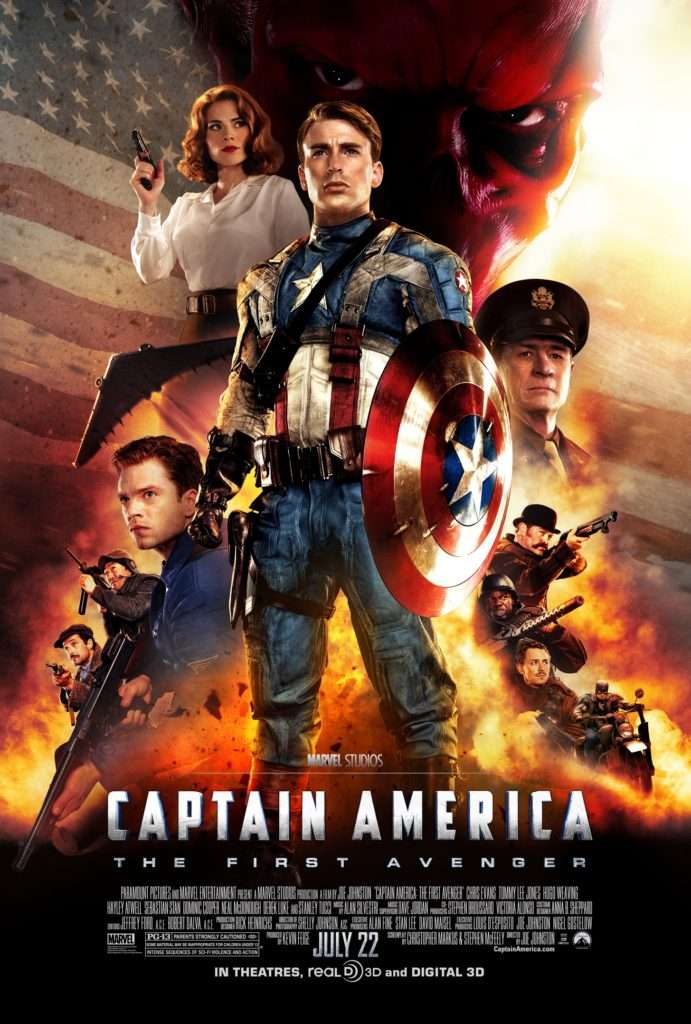 I must say, this INFINITY WAR prep is SO much fun! I’ve been having a blast rewatching these Marvel movies in their cinematic release order. If we were going in chronological order, Cap would be first. But like I’ve said before, I love watching them in the order in which they were released because when you rewatch them, you can say, “Aha! So that’s what they were talking about in ‘that’ movie.”

CAPTAIN AMERICA: THE FIRST AVENGER is the fifth movie in Phase One of the Marvel Cinematic Universe. Remember the supersoldier program that was “put on ice” in THE INCREDIBLE HULK? Yep. Steve Rogers was part of that supersoldier program. In fact, we’re led to believe that he’s the only one since the serum is destroyed in the movie. But later on in Phase Two of the Marvel Cinematic Universe, we find out that Steve wasn’t the only one (The Winter Soldier!!). It’s things like this that make rewatching so cool. It’s like you get an entirely different picture!

Another connection in this movie is the Tesseract, which was the “jewel of Odin’s treasure room.” Johann Schmidt steals it from the Asgardian worshipers, but from watching THOR, we know it’s back in Asgard because Loki uses it to open a wormhole in THE AVENGERS. This ties in with INFINITY WAR because we know that the Tesseract holds the Space Stone which Thanos will eventually possess. Okay, that was a very abbreviated version of what happens, but if you’re part of the Marvel fandom, you can follow my scattered thoughts!

I adore CAPTAIN AMERICA: THE FIRST AVENGER. My very favorite thing about this movie is the reason Steve Rogers was chosen to be the very first. The supersoldier serum was created to amplify what was already inside of a person. If one had a good heart and good intentions, those things would be made stronger. And, obviously, Steve has the best heart and best intentions. He is brave, and his spirit is strong. Those are the things that make Steve the ideal candidate.

And then there is Bucky. Bucky Barnes is and has the best friend ever! Steve and Bucky have been friends forever, and Bucky always protected “little” Steve. When Steve becomes Captain America, rescuing Bucky is, of course, high on his priorities! We all could use friends like these.

I. Can’t. Wait. for INFINITY WAR, and I can’t wait to see Captain America in it!! The scene in the trailer where T’Challa says “And get this man a shield” is just gasp worthy…you know…the facial hair. I am SO excited to see BLACK PANTHER in theatres February 16. It is going to be amazing, PLUS I want to see if there is a Captain America scene since it’s sort of implied that Steve is in Wakanda (in the trailer at least). Who knows! We will know soon!!!

And get this man a shield….

Thanks for sharing!
« Tasty & Family-Friendly Healthy Dinner Recipes
Buying a House in Ohio is Easy »