You are here: Home / Books / A Song Unheard Book Review
Thanks for sharing! 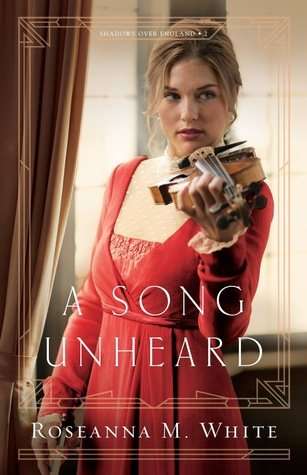 I received a copy of A Song Unheard free for an honest review. This post contains affiliate links. If you make a purchase, I may receive compensation at no cost to you.

Willa Forsythe is both a violin prodigy and top-notch thief, which make her the perfect choice for a crucial task at the outset of World War I—to steal a cypher from a famous violinist currently in Wales.

Lukas De Wilde has enjoyed the life of fame he’s won—until now, when being recognized nearly gets him killed. Everyone wants the key to his father’s work as a cryptologist. And Lukas fears that his mother and sister, who have vanished in the wake of the German invasion of Belgium, will pay the price. The only light he finds is in meeting the intriguing Willa Forsythe.

But danger presses in from every side, and Willa knows what Lukas doesn’t—that she must betray him and find that cypher, or her own family will pay the price as surely as his has.

In A SONG UNHEARD, the second book of the series Shadows Over England, author Roseanna M. White weaves a tale of intrigue, suspense, romance, and faith. The story is told against the historical background of WWI and the invasion of Belgium by the Germans.

The heroine, Willa Forsythe, was briefly introduced in the first book of the series, A NAME UNKNOWN. Willa was abandoned by her parents at the age of six and had to learn how to survive on the streets of London by stealing food and thievery. Willa’s “family” became others who were in the same situation she was in and they bonded together to survive.

Willa’s reputation as a thief results in Mr. V, a British government agent, offering her money to go to Wales and steal a key to a secret code that British experts could use in the decoding of messages and also sending messages behind enemy lines. The key is in the possession of Lukas De Wilde whose father was the cryptologist who invented it. Willa is certain she will have no problem stealing the code and accepts the offer.

In Wales, Willa stays at the home of two sisters who are aware of her assignment. She meets Lukas, a renowned violinist and notorious playboy, at a party set up by the sisters. When Lukas finds out that Willa plays the violin, he invites her to play his Stradivarius. Her playing, which she does by ear not having had lessons, astounds Lukas, and he offers her lessons to learn theory and proper posture. These lessons lead to a growing relationship in which Lukas falls in love with Willa.

As the relationship grows and Willa tries to avoid feelings for Lukas, she finds herself facing a dilemma. Should she reveal to him her purpose in coming to Wales? How will Lukas react if he knows the truth? She is a thief and a liar after all.

There are many twists and unexpected turns as the story continues with an attempt to rescue Lukas’s mother and sister from behind enemy lines. Willa, who has never believed in a loving God, has an experience in which her opinion of God is challenged. Is He like her parents who deserted her or does He love her and desire her love?

This is a book I could not put aside but read with a passion to discover what the next chapter would bring for Lukas and Willa. I highly recommend it to all who enjoy this genre.

Thanks for sharing!
« Watch Guardians of the Galaxy Vol. 2 to Prepare for Infinity War #InfinityWar
Delicious Apple Muffins | A Vegan Recipe »