You are here: Home / Entertainment / 7 Best Scenes from SOLO: A Star Wars Story #HanSolo
Thanks for sharing!

SOLO: A STAR WARS STORY is full of exciting scenes, funny comments, and great character interactions. It’s not just a movie: it’s an experience. I got to see this movie on opening night, and you can bet I plan to see it again. If you haven’t seen it yet, I’m going to ask you not to read this post, since it contains spoilers. Instead, you can check out my spoiler-free SOLO post. Feel free to come back once you’ve seen the movie!

As I already said, SOLO: A STAR WARS STORY is full of amazing scenes. I was going to write a post about the 5 best scenes, but I couldn’t narrow it down to the 5 best scenes. I managed to narrow it down to 7, but if you’ve already seen the movie, you know there are so many good scenes that didn’t make my list. Feel free to leave me a comment about what scenes you feel should be added to this list! 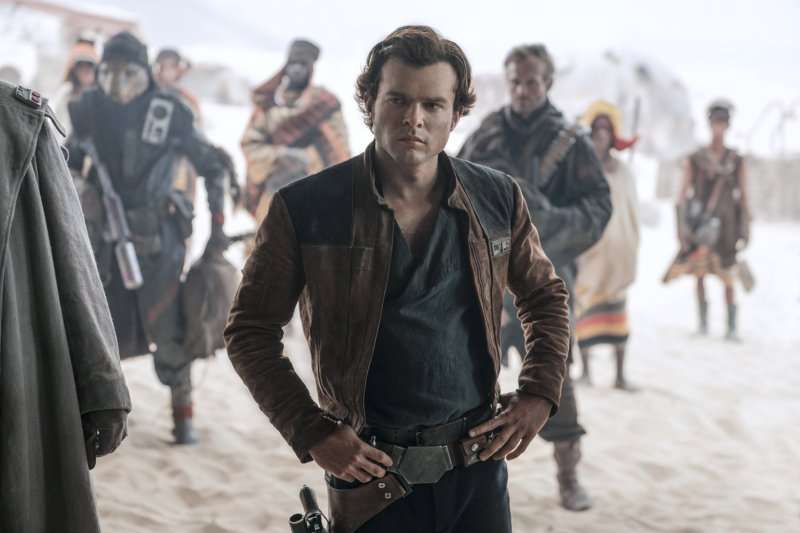 He’s just lost his partner, and unless he can convince the Empire to enlist him, it will all be for nothing. They will both be dragged back to slavery and will never get a chance to escape again. The beginning of SOLO is actually kind of emotional, seeing Han mistreated, having to plot and scheme to survive even from an early age. It’s heartbreaking when the Empire recruiter asks Han what his last name is. “Who are your people?” he asks, and Han responds that he has no people. Who would have thought that “Solo” isn’t just a name, but a label? We all know that Han doesn’t stay “solo” forever, but that doesn’t change the fact that Han was alone for three years and had to carry the reminder as part of his name. I wonder if he kept the name out of sheer irony?

Like I said, Han doesn’t stay solo for long. Poor Han. It seems like he’s always getting thrown into the path of some type of monster. Luckily, this time the beast isn’t something Han has to outsmart to survive. I don’t know about you, but I loved seeing Chewie trying to destroy Han during their first meeting. We all know that Chewie becomes Han’s co-pilot, but here we see that Chewie really could tear Han’s arms off if he wanted to. And leave it to Han to come up with a plot to save himself – and his new ally. Han and Chewie have been bickering since the beginning. For whatever reason, even though he can rip Han’s arms off, Chewie has decided to defer to Han. Maybe as a way of saying thank you for helping him escape, for treating him as an ally instead of a beast.

We all know that Han won the Falcon from Lando in a card game. We knew from the movie trailers that there would be a card game in SOLO: A STAR WARS STORY. Unfortunately, Han not only does not win the Falcon during his introductory card game with Lando, but he also loses a ship he doesn’t actually have access to. Despite the results of this card game, it sure is entertaining to watch! The banter between the two cocky scoundrels is great. Both think so highly of themselves. It’s clear from the start that these two are going to have a very interesting relationship. We know these two eventually become good – well, semi-good – friends. Unlike his relationship with Chewie, though, Han’s relationship with Lando definitely does not take off from the get-go. Donald Glover definitely steals the scenes he’s in, and the card game is no exception.

And I might be cheating, but the card game at the end is also definitely one of the best scenes in SOLO. We knew the card game may not have been 100% fair, and seeing what actually happens is hilarious, considering that Lando is accusing Han of cheating him out of the Falcon, whereas the only reason Lando lost was because he didn’t realize Han had foiled Lando’s plan to cheat.

4. The Rebellion on Kessel

L3 is possibly my favorite character in SOLO: A STAR WARS STORY. She’s so sassy and confident. Most importantly, she’s not afraid to stand up for what she believes in. Everyone knows how important the Kessel heist is, but that doesn’t stop L3 from killing 2 birds with 1 stone when she sets the captive droids on Kessel free, creating both a rebellion and a distraction. The chaos that ensues is perfect, though Han and the others may disagree. The droids and the wookiee captives are set free and we see the bad guys suffer, and the crew is able to get the coaxium onto the Falcon – even though L3 is badly damaged in the process. This scene is edge-of-your-seat exciting, which definitely lands it a spot on the list of best scenes.

5. Han and Chewie Fly the Millennium Falcon During the “Kessel Run” 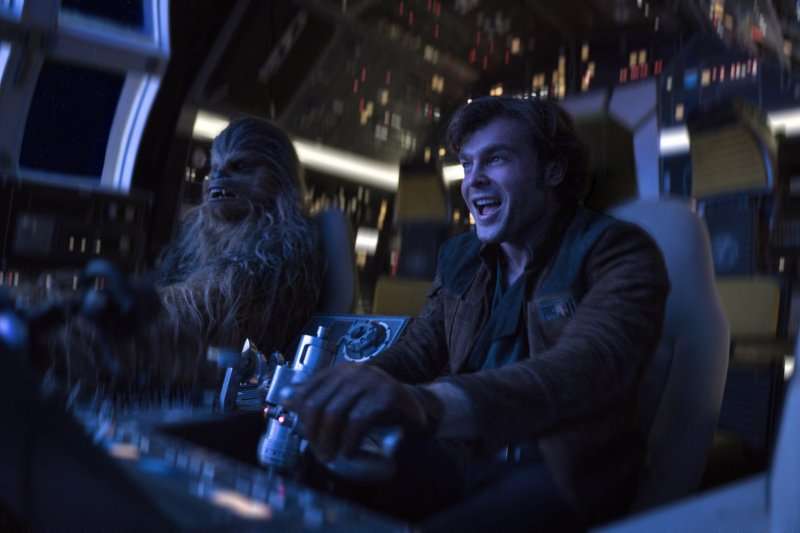 Speaking of edge-of-your-seat exciting, the famous “Kessel Run” is definitely that! The Kessel Run is the ridiculous flight Han is notorious for, where he supposedly made the trip in 12 parsecs. But the Kessel Run is so much more than that! It’s the first time Han flies the Millennium Falcon. It’s the first time Han and Chewie are pilot and co-pilot. Seriously, watching the two of them sit next to each other in the Falcon for the first time gave me goosebumps and possibly a couple tears. This scene is possibly the best scene in SOLO: A STAR WARS STORY. Audiences were looking for the infamous Kessel Run, and this movie definitely delivers. Lando may not agree, but that is some top-notch flying our two beloved characters pull off.

6. The Pirates’ Identities are Revealed

We all knew that our crew would have to face off against Enfys Nest and the Cloud Riders before the movie was through. But did anyone guess that Enfys Nest would turn out to be a young girl, and the face-off would be her explaining why they can’t give the coaxium to Vos, and why they should give it to the Cloud Riders, who are trying to help build a resistance? I was so excited as I saw Enfys Nest begin to take the mask off, my mind whirling, trying to put together possibilities to who hides behind this mask. My jaw practically dropped when the mask came off. But this scene is one of the best not only because of the iconic mask removal, but also because of how the rebels are subtly woven into the story. Not to mention, this is the first time Han is about to help the rebels, and he has no idea how far his involvement will go in the future.

I should have seen it coming, but I was actually surprised when Tobias Beckett turned on Han. Thankfully, Han knew his mentor better than I did, so he wasn’t surprised. Still, despite this betrayal, you can see how Han still feels close to Beckett during their confrontation after Vos is dead. It speaks of another betrayal that will come in the future. Han knows Beckett is going to kill him, and he doesn’t waste time listening to whatever last words his mentor wants to give him – he shoots him first. And even though Han knows Beckett was going to kill him, you can see the pain in his eyes as he holds Beckett during his last breaths. This scene is important because it really shows who Han is as a character – someone willing to do what it takes to survive, even though his conscience weighs heavily on him.

I plan to see SOLO: A STAR WARS STORY again in theaters. It might not be the type of movie that you have to see more than once, but it’s definitely the type of movie you want to see more than once. We already covered that this movie is full of great scenes besides the 7 that comprise this list. Why wouldn’t you want to see it again? You can purchase your tickets at Fandango.com.

To tide you over until you do see it again, check out the clip “190 Years Old,” which is part of what I think is the very best scene in the whole movie. 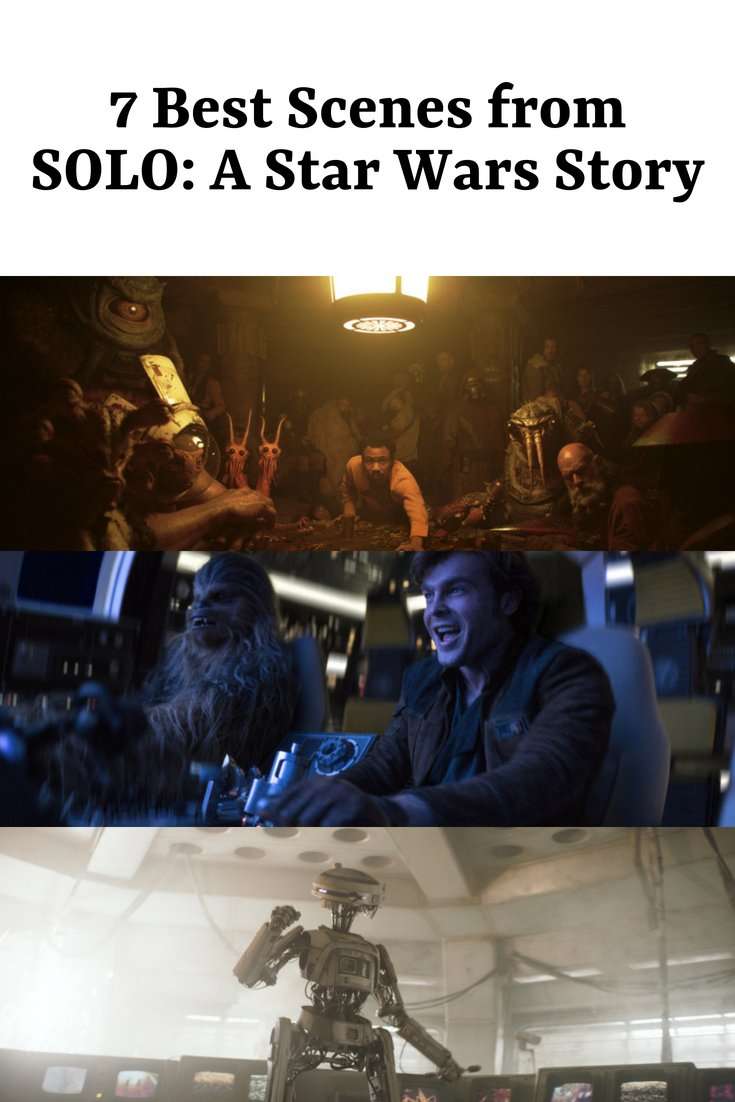 Thanks for sharing!
« Hidden and Not So Hidden Gems in Ralph Breaks the Internet Trailer #RalphBreaksTheInternet
Make Some Wall-E Dirt Pudding Plant Samples for Pixar Fest #PixarFest »