You are here: Home / Books / Something About Forever by Kimberly Loth 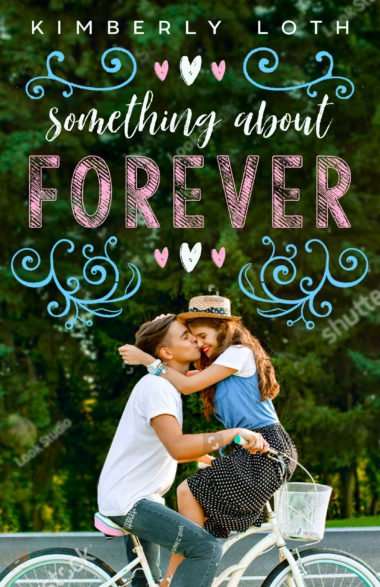 They are bound to be the death of me.

Especially one with blue eyes, perfectly Mormon cut hair, and probably the inspiration for the girl’s camp song “Hot Priest”.

Why the heck did he have to be the bishop’s son?

Cause here’s the thing. While I’m Mormon, I don’t really belong. I mean, I want to, but I just can’t seem to keep on the straight and narrow. Seriously, look at me. I’m not even supposed to use the name Mormon anymore, but Latter-Day Saint is a mouthful. So I’m sticking to Mormon. Sorry, Prophet.

The bishop knows my past. He knows my problems. There is no freaking way he’s going to let me date his son.

Yet, Nate comes after me anyway. And I fall hard.

But eventually….I will have to tell him about my past.

And I know, he’ll run far, far away from me when I do.

Excerpt from Something About Forever

I pulled into the parking lot and gaped at the school. It was at least three times as big as my old one. Now I wished Mom had come with. Terror gripped me. A few kids looked at my car funny. Oh yeah, this probably wasn’t the best image. I needed to get out of there, so most people’s first impression wasn’t of a crazy girl in a ladybug. Seriously. My dad had to know this would humiliate me.

I hurried out of the car and kept my head down as I approached the school. I entered the front doors. It took a moment for my eyes to adjust. The light inside was unnatural and weird. I spotted the office right away. Mom had already submitted all my paperwork, so all I had to do was pick up my schedule and a map. The secretary was impersonal and short with me. So much for a good start. I stopped outside the door, not sure where I was going.

Nicki’s familiar purple head bobbed over to me. She gave me a wide smile. “Hey, you look lost.”

“Yeah, a little.” She had no idea how glad I was that she found me.

“Here, let me look at your schedule.”

She perused it. “We’ll make sure you don’t get lost.”

What an odd thing. “Does he always bring donuts?”

Nicki gave me a crooked grin. “No. Don’t tell Jessica, but I think he’s trying to impress you. Either that or his mom is making him be nice. My money’s on the first one though. Nate’s a nice guy, but this is a little over the top.”

“Why would he try to impress me?” I wanted to believe her, but it seemed too good to be true.

She sniggered. “I’m not even going to answer that. Miss I’ve-got-curves-for-miles, great hair, and a smile to die for.” Yeah, so I had an hourglass figure, and I did have good hair. It was deep brown and thick. No one ever mentioned the smile before though.

Nicki chattered as we moved through the crowds. “We all eat lunch together. Don’t feel obligated to sit with us though. It’s just something we’ve done since freshman year. It’s more than just us though, and it’s a mix of juniors and seniors. You’re a junior, right?”

I liked her a lot. Something about being around her immediately put me at ease. It was like she assumed we’d be friends. Things were like that with Cherise, but Nicki was a better person than Cherise. At least I hoped so.

We entered the cafeteria, and conversations buzzed all around us.

“There are so many people.” I missed my little school where everyone knew everyone. Though maybe this was better. No one here knew my past, and I didn’t have to be that person. Maybe my past would go away.

“Yeah. It’s easy to get lost among the crowds.”

I sat across from Nate and shocked myself on the table. I tried not to look like anything had happened, but Nate met my eyes, and I got another shock. My heart raced. Nicki took the seat next to me.

“She’s in my pre-calc and lit class.” She handed the schedule to Jessica.

“We’re in American History together,” Jessica said with a fake smile.

Nicki took the schedule back. “Oh, you’ve got speech with Fitz.”

“If you’re in Jessica’s history, I’m in there as well,” Nate said.

My head spun. It sounded like I’d have classes with all of them. Emma sat on the other side of Jessica but didn’t even look up at me. She had her head buried in some book.

Nate opened the donut box. “I got glazed because everyone likes that.” He met my eyes for a half second and then dropped them again. My heart raced. There was no way he was interested in me. He was completely out of my league.

I took a donut even though I’d already eaten. Jessica looked down her nose at the box and stood. “I’ve got to run. See you in class,” she said and spun on her heel.

She’d decided not to like me from the moment she saw me in the chapel. She never bothered to even know who I was. She pretended to be nice, but I’d obviously angered her in some way just by existing.

Praise for Something About Forever

Something About Forever hit me directly in the feels. I haven’t read a book in a while that’s made me cry but this one got my tear ducts flowing. Lauren and Nate’s story is very reliable. I completely recommend this book if you haven’t read it yet! ~Brianna

Kimberly Loth has lived all over the world. From the isolated woods of the Ozarks to exotic city of Cairo. Currently, she resides in Tucson, Arizona with her family including an old grumpy cat named Max.

She’s been writing for ten years and is the author of the Amazon bestselling series The Dragon Kings. In her free time, she volunteers at church, reads, and travels as often as possible.

Thanks for sharing!
« 8 Things You Need To Do Before Welcoming A Dog Into Your Home
Butterbeer Ice Cream and Harry Potter Game Tri-Wizard Game | The Goblet of Fire »