You are here: Home / Books / Mrs. Jeffries Delivers the Goods | A Victorian Clean Cozy Mystery Book
Thanks for sharing!

When poison fells a crude, self-important member of society, Mrs. Jeffries and Inspector Witherspoon realize they are dealing with a madman who intends to kill again in this all new installment in the beloved, New York Times bestselling Victorian Mystery series. 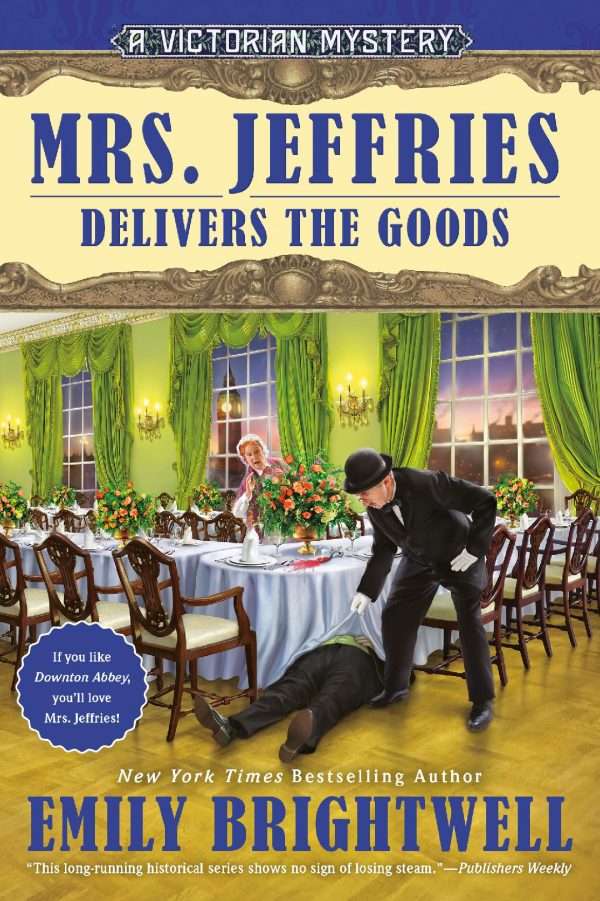 On a cold night in February, Wiggins, the young footman for Inspector Witherspoon, attends the Lighterman’s Ball held at the Wrexley Hotel with his friend. He, along with the rest of the room, watch in horror as Stephen Bremmer goes into spasms and abruptly dies while sitting at the head table.   Mrs. Jeffries and the others are shocked that one of their own was at the scene of Inspector Witherspoon’s latest homicide investigation.

The victim happened to be a boorish Oxford-educated snob who felt that because of an accident of birth he was entitled to anything and anyone he wanted. Yet Stephen Bremmer was barely literate, lazy, and prone to making stupid mistakes. His biggest mistake was trying to blackmail someone who even more arrogant than himself.

This is not the first time murder has cast its pall on the Wrexley, and the owners and management are not pleased that it has happened again. But Inspector Witherspoon, Mrs. Jeffries and their household are on the case. It isn’t long before they uncover a maze of hidden motives, unrequited love, and the terrifying rage of a killer who won’t stop.

My Review of Mrs. Jeffries Delivers the Goods

Thanks to NetGalley and the publisher, I received a copy of this book free for review. All opinions are mine.

I discovered the Mrs. Jeffries books 6 years ago, and I’ve read quite a few of them since. I love cozy mystery books…especially when they are historical ones. There’s just something about the Victorian age that makes cozy mystery books even better. It probably has something to do with the fact that they didn’t have the technology we have now, so they had to do a lot of sleuthing on foot. That’s where the staff in the Mrs. Jeffries books come in. No, Mrs. Jeffries isn’t a detective, but since she started working for Inspector Witherspoon, she’s solved her fair share of murders.

Mind you, Inspector Witherspoon doesn’t realize his household is helping him. Every evening, when he comes home from work, Mrs. Jeffries listens to him talk about his cases and gives him gentle nudges based on what she and the others have learned. It helps that the Inspector’s partner, Barnes, does know that the household is helping since he can get and give information to Inspector Witherspoon and the staff based on what each has learned.

More about the Mrs. Jeffries books

Though these books don’t have to be read in order, and I haven’t read them in order, there will be some spoilers regarding relationships if you jump in in the middle. I don’t mind it at all because the characters and the story line keep me entertained every time, and I appreciate the fact that these are clean cozy mystery books with little to no swearing and definitely nothing suggestive.

I highly recommend Mrs. Jeffries Delivers the Goods as well as the entire series. There are, of course, those that I have liked more. This is one of those. I really loved trying to figure out “who done it” and how. I agree with the book cover…if you like Downton Abbey, you’ll love Mrs. Jeffries!

I give Mrs. Jeffries Delivers the Goods 5 stars!

About the Author Emily Brightwell

Emily Brightwell was born in the Appalachian mountains of West Virginia. Her family moved to Southern California in 1959 and she grew up in Pasadena. After graduating from California State University Fullerton, she decided to work her way around the world and started in England. She didn’t get any further because she met future her husband there, got married and moved back to California.

While living in Long Beach, she decided to pursue her dream and become a writer – despite having two children and a full-time job. She began the Mrs. Jeffries series in 1993 with “The Inspector and Mrs. Jeffries” and has written thirty-seven more mysteries in the series in the following twenty-four years. The next book is “Mrs. Jeffries Delivers the Goods” – to be published March 2019. Now that her children are grown and have left home, Emily and her husband live in Northern Nevada. Her books have sold in the United Kingdom, Japan, and Hungary.

Thanks for sharing!
« Disney Movies 2019 List | Look at What’s Coming from Walt Disney Studios!
A Dog’s Way Home Movie Based on the Book is Now In Theatres »