You are here: Home / Books / The Governess of Penwythe Hall by Sarah E. Ladd | Regency Romance Book Review
Thanks for sharing!

The Governess of Penwythe Hall by Sarah E. Ladd is the first book in a brand new Regency romance series, The Cornwall Novels. 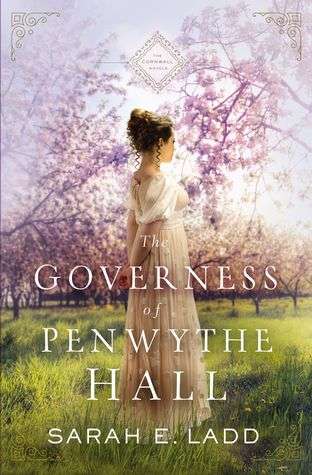 Thanks to NetGalley for providing me with an advanced e-copy of the book. This post contains affiliate links.

The Governess of Penwythe Hall

Cornwall was in her blood, and Delia feared she’d never escape its hold.

Blamed for her husband’s death, Cordelia Greythorne fled Cornwall and accepted a governess position to begin a new life. Years later her employer’s unexpected death and his last request to watch over his five children force her to reevaluate. She can’t abandon the children now that they’ve lost both parents, but their new guardian lives at the timeworn Penwythe Hall . . . back on the Cornish coast she tries desperately to forget.

Jac Trethewey is determined to revive Penwythe Hall’s once-flourishing apple orchards, and he’ll stop at nothing to see his struggling estate profitable again. He hasn’t heard from his brother in years, so when his nieces, nephews, and their governess arrive unannounced at Penwythe Hall, he battles both grief of this brother’s death and bewilderment over this sudden responsibility. Jac’s priorities shift as the children take up residence in the ancient halls, but their secretive governess—and the mystery shrouding her past—proves to be a disruption to his carefully laid plans.

Rich with family secrets, lingering danger, and the captivating allure of new love, this first book in the Cornwall Novels series introduces us to the Twethewey family and their search for peace, justice, and love on the Cornish coast.

My Review of The Governess of Penwythe Hall

Books that are set in the Regency period are some of my favorites, and this is no exception. From the very beginning, The Governess of Penwythe Hall draws you in. You wonder what has happened that Cordelia is leaving her mother-in-law’s home, and why her mother-in-law is so angry. And, you don’t find out until much later in the book what happened!

A few years pass, and the book picks up with Cordelia having been a governess, during those years, to 5 children she loves as much as she’d love her own. Sadly the children lost their mother years ago, and then they lose their father to a tragic accident. At the very last moment, their father changes his will and names his brother as the children’s guardian, rather than his wife’s sister. This comes as a complete shock to his brother, Jac, since they hadn’t been on speaking terms for years. It’s also a shock when the children, along with their governess and tutor, show up since the letter “warning him” never arrived.

I loved the development of the characters through the story, especially that of the eldest child. The romance that develops in the book is very believable and not rushed like some love at first sight books are. Sarah E. Ladd uses such descriptive language, that you almost feel as if you are in Cornwall in the 1800s.

Side note: I’ve wanted to live in Cornwall since I first became addicted to the British television show Doc Martin. This book has convinced me that I definitely should move there. Now, if I could only find the money…

Once the story takes us back to this area, we start finding out more about Cordelia’s past and why she left her mother-in-law’s house. I absolutely love the how everything plays out in The Governess of Penwythe Hall. If you are a fan of inspirational historical fiction, you will too!

Add this book to your Goodreads shelves!

Purchase The Governess of Penwythe Hall on Amazon.

Sarah E. Ladd has always loved the Regency period — the clothes, the music, the literature and the art. A college trip to England and Scotland confirmed her interest in the time period and gave her idea of what life would’ve looked like in era. It wasn’t until 2010 that Ladd began writing seriously. Shortly after, Ladd released the first book in the Whispers on the Moors series. Book one of the series, The Heiress of Winterwood, was the recipient of the 2011 ACFW Genesis Award for historical romance.

Thanks for sharing!
« Vacation for Dexter by Lindsay Ward Book Review
How to Watch The Lion King Without Crying »