You are here: Home / Books / What Happened That Night Book Review
Thanks for sharing!

What Happened That Night is the thrilling, twisty story of Clara Porterfield, who has always been in love with the neighborhood golden boy—until her sister, Emily, kills him. What happened? And is it Clara’s fault? 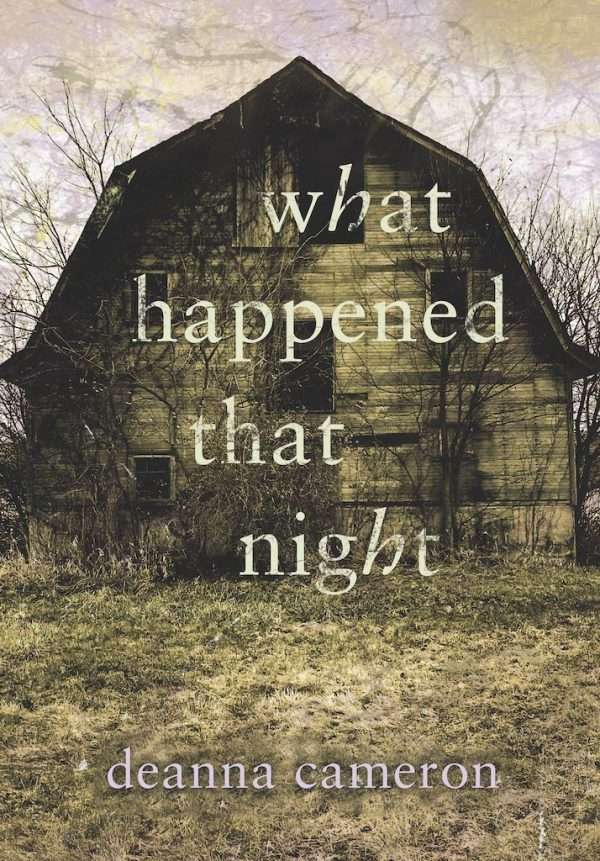 Thanks to NetGalley and WattPad Books for a free ARC. This post contains affiliate links.

What Happened That Night by Deanna Cameron

How well can you ever really know your sister…?

Golden boy Griffin Tomlin is found dead, floating in his pool, the morning after his family’s Labor Day party, and neighbor Emily Porterfield is arrested for his murder. No one knows why she killed him, except for her younger sister, Clara.

The secrets behind What Happened That Night unravel in dual timelines:

In the present, Clara struggles with the aftermath of the murder—questions and distrust from her friends, denial from her parents, and visits to her sister in jail. And amidst all of that, another body is discovered that could be connected.

In flashback, the events that brought Clara, Griffin, and Emily together and that led to his death are revealed—events that involve a crush, an obsession, and a shocking twist.

Trigger warning: This book contains sexual assault and psychological manipulation. Some early readers found this book difficult to read due to past experiences.

What Happened That Night is a very intense read! Once I started reading, I could not put it down. I had to know how it ended. The dual timelines give it that extra “can’t stop reading” element. As the reader, you already know that Emily is in jail for Griffin’s murder, and that she’s confessed. You also know that Clara blames herself for Griffin’s murder since she told her sister what Griffin did to her. However, Clara won’t tell her parents or the police why she thinks Emily killed Griffin.

Of course, we’re not told right away what Griffin did to Clara, but we can easily guess. And it’s not just the one act. It is many instances of psychological manipulation. It’s knowing that Clara is truly afraid of Griffin. Knowing this sort of makes what Emily did almost forgivable. She was protecting her little sister from getting hurt again. It’s the premise of the whole story of “what happened that night.”

These characters, though not completely fleshed out, are believable. Also, Clara is not quite a reliable character since she is hiding so much. It’s been a long time since I’ve been in high school. However, I remember enough to know that once rumors get started, they’re difficult to stop. And if you’ve had a traumatic event happen, not too many people are going to be there for you.

Clara makes a couple of new friends through this horrible ordeal. Aniston reminds me a little of Paris on Gilmore Girls. If you don’t watch, then you’ll find out what she’s like by observing Aniston’s refusal to let a news story slip away. Clara also becomes friends with the last person at school she would expect to treat her well: Griffin’s best friend Kolby.

What Happened That Night threw me for a loop. I don’t want to give you any spoilers, but expect to be surprised!

Q & A with Deanna Cameron

Question: What inspired you to write What Happened That Night?

Deanna Cameron: The book was inspired by Super Bowl parties I used to attend when I was a teenager. After finishing my previous book, I was struggling with writer’s block and couldn’t think of a concrete idea for a new book, so I came up with the idea of writing and describing just random scenes, without dialogue. One of the settings I thought of was the series of old Super Bowl parties I went to. Another was a married couple in suburbia, working in their respective gardens and reminiscing over block parties. Eventually, those scenes turned into the opening of What Happened That Night and one of the more pivotal flashbacks.

Q: You’re only 22! Did you ever anticipate that you’d be a published author with a serious fan following at such a young age?

Cameron: I really didn’t. I thought that if I were ever going to be published, I’d be in my mid-thirties like a lot of YA writers, juggling a teaching position at the same time or something. A few of my friends had asked me, years ago, when I would decide to pursue publishing, but I never really had an answer because I never felt qualified to seek that out. I was young, with no degree, and I think that’s what makes Wattpad so special: it doesn’t care about those things. The wonderful people behind Wattpad sought me out, so many times, because they cared more about my story than my credentials. I wasn’t used to such a massive website actually caring about me—me! I never anticipated it, but I’m so thankful for it.

Q: It’s not spoiling anything to say that Clara is a pretty unreliable narrator. What made you decide to write her that way? What can you tell us about her frame of mind?

Cameron: It was actually almost something of an experiment I was conducting on the readers. I noticed before, in comments related to other stories and my own on Wattpad, that readers generally felt the same way towards other characters as the protagonist did. So, I wanted to see if I could utilize that and if I could actually, for lack of a better word, create readers’ opinions of certain characters through feeding them the protagonists’ own thoughts. Then, use that to maximize the impact of the twists that involved certain characters.

Another reason was because so often, we take our own opinions as facts, and you’ll read Clara doing that frequently. She makes assumptions and bases her emotions around them. But, like what usually happens in real life, we realize we don’t know the whole story. We have a little bit of the beginning, part of the middle, and none of the ending. The more we know, the more that story changes, and basically the entire journey of the novel is Clara realizing she might be the only one who knows her half of the truth, but it’s not the whole truth.

Q: What were the biggest challenges you faced when writing What Happened That Night? Were any of them surprising?

Cameron: It was probably writing about the trauma and the aftermath of an experience I never had before. I wanted to accurately and delicately handle the topic of sexual assault. How can I add reality to something that’s only ever been a nightmare to me? That was something I devoted a lot of time to. Another challenge was the new ending. The original ending—the one still on Wattpad—I never really liked, but for some reason, happened anyway. With so much changing in order to get the book ready for publishing, a new ending was something I pushed for, even before I knew how I wanted to go about it. Now I’m much more satisfied with it, and I think readers will be too.

Deanna Cameron has been writing on Wattpad since she was sixteen using the pseudonym LyssFrom1996. In 2015, she posted her novel, What Happened That Night, on the platform, which has gone on to be published in France and is forthcoming in North America. Deanna spends the early hours of the morning writing and currently resides in Western New York, where she attends university.

Thanks for sharing!
« Cozy Mystery Book Deals for 99 cents
Dora and The Lost City of Gold Swings Into Theaters August 9, 2019 »