You are here: Home / Books / Ruthless Gods by Emily A. Duncan Book Review
Thanks for sharing!

I received a digital copy of Ruthless Gods by Emily A. Duncan free from NetGalley; all thoughts and opinions are my own, unbiased, and honest. This post contains links from which I may receive a commission if you make a purchase. 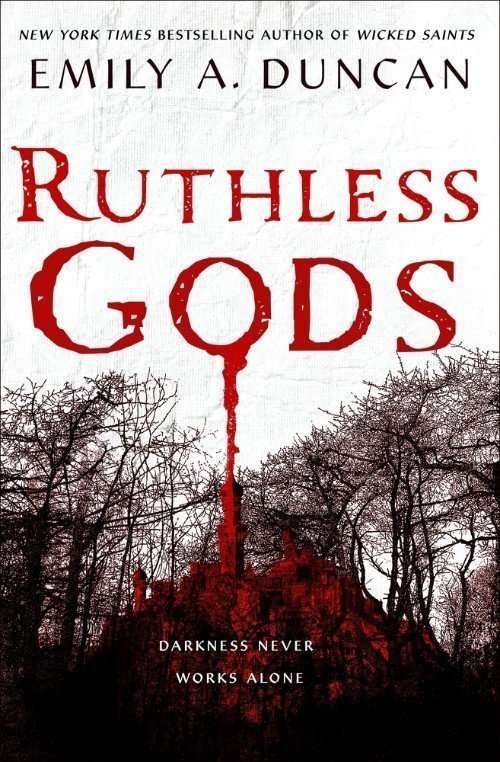 I was lucky enough to receive an advanced readers copy of Ruthless Gods by Emily A. Duncan. Emily’s first book, Wicked Saints, was one of my most anticipated reads of 2019 and it was the first book I dove into during my summer vacation. I thoroughly enjoyed Wicked Saints, but I absolutely adore Ruthless Gods. (And can we take a minute to appreciate these epic titles?) If you are a YA fantasy lover, this series is for you!

You’ll find yourself thrust into the war-torn worlds of gods-fearing Kalyazin and heretical Tranavia – a feud between those who turned their backs on the gods and those who would have them brought to justice. You, along with the characters, will begin to question who’s in the wrong and who’s in the right – and you’ll learn how far someone will go to defend what they believe in, whether wrong or right.

This is your final chance to avoid spoilers! Turn away or face the consequences! (I am going to try to limit spoilers for Ruthless Gods itself. However, you may want to proceed with caution if you don’t want to know anything about it. If that’s the case, just know it is even better than Wicked Saints and you should definitely read it.)

Nadya doesn’t trust her magic anymore. Serefin is fighting off a voice in his head that doesn’t belong to him. Malachiasz is at war with who – and what – he’s become.

As their group is continually torn apart, the girl, the prince, and the monster find their fates irrevocably intertwined. They’re pieces on a board, being orchestrated by someone…or something. The voices that Serefin hears in the darkness, the ones that Nadya believes are her gods, the ones that Malachiasz is desperate to meet – those voices want a stake in the world, and they refuse to stay quiet any longer.

In her dramatic follow-up to Wicked Saints, the first book in her Something Dark and Holy trilogy, Emily A. Duncan paints a Gothic, icy world where shadows whisper, and no one is who they seem, with a shocking ending that will leave you breathless.

I really enjoyed Wicked Saints and it left me desperate for more of the world. I wanted to peel back the layers and find out more about the mythology that Emily hints at in her debut novel, and I especially wanted to see more of the gods’ darker sides and the Black Vulture’s power. Ruthless Gods delivers all that and more. You are not prepared. I had the opportunity to meet Emily at Cleveland’s CleReads Book Festival this summer and she told me that book two was basically “the last hundred pages of Wicked Saints, expanded,” and yet I was not prepared for her to deliver that promise.

Ruthless Gods moves quickly. There was not a single scene that dragged on. I was slightly surprised considering how long the book is. I expected the Black Vulture to be an elusive presence throughout the first half of the book, but he actually shows up pretty early. In an effort to avoid spoilers, I won’t tell you how his reunions with the other characters go, but know that you will feel all the feels one feels towards awkward, manipulative Malachiasz. Things get rolling pretty quickly thanks to this frustrating-yet-lovable character.

As in Wicked Saints, there’s a lot of walking in Ruthless Gods. However, this is not just a repeat of what we read in the first book. I have to give Emily props for that accomplishment. Rather than heading into gods-forsaken Tranavia, our characters head deeper into Kalyazin, and it is in these lands that we finally, finally get to see the mythology hinted at in the first book. There’s monsters and gods and fallen gods, creepy temples and sacred spaces. With two characters who can now commune with the “divine” (or not-so-divine) you can bet there’s some pretty interesting divine intervention that occurs.

Even though we met Nadya, Serefin, and Malachiasz in Wicked Saints we get to see different sides to these characters in Ruthless Gods (especially because Malachiasz spends a lot of time – I won’t tell you how much – as the Black Vulture). I think what makes these characters interesting this time around is that they all wrestle with their identity. Nadya can’t understand who she is without her gods. Serefin, the heretical blood mage, is tied to the divine. And Malachiasz can’t even remember who he is most of the time. In addition to their struggle with identity, all three also have to struggle with what sacrifices they’re willing to make for what they believe in.

In addition to the three core characters, we also get to meet a handful of new and returning characters. The best thing about the supporting cast is that they aren’t just background props. These supporting characters actually support our main characters and aid in moving the plot forward. Of course there’s Ostyia and Kacper, without whom Serefin would probably be a drunk, useless lump. Parj and Rashid also make a comeback – and they are definitely more involved than in Wicked Saints, especially Parj. We’re reintroduced to someone from Nadya’s past (no spoilers!) who makes Nadya both question herself and more sure of herself. Pelageya makes a return, which was one of my favorite parts about the book. (Pelageya is one of my favorite characters and I really want to see more of her!) And that’s just the characters we’ve already met!

And, of course, we cannot forget our cast of gods and fallen gods….

Ruthless Gods by Emily A. Duncan comes out April 7, 2020. You can pre-order it by clicking the link below:

I’m not going to miss out on a final chance to convince you to read the book. If you’re still on the fence, hear me out: just do it. Do the 100-page test. If it doesn’t catch your attention within 100 pages, you don’t have to finish it. While I really enjoyed Wicked Saints I could understand why some people didn’t. I truly believe that Ruthless Gods makes up for those areas that some people found lacking. ebooks never fully capture my attention, but I didn’t have that problem at all with Ruthless Gods. I loved every bit of it, and I hope you’ll give it a chance.

Thanks for sharing!
« Brand New DreamWorks Dragons Rescue Riders Coming to Netflix
Make These Changes To Your Home And Improve Your Life »