You are here: Home / Books / Mrs. Jeffries and the Alms of the Angel Book Review
Thanks for sharing!

When a wealthy widow is murdered, Mrs. Jeffries investigates what happens when money can’t buy your life in this all-new installment in the beloved Victorian Mystery series. 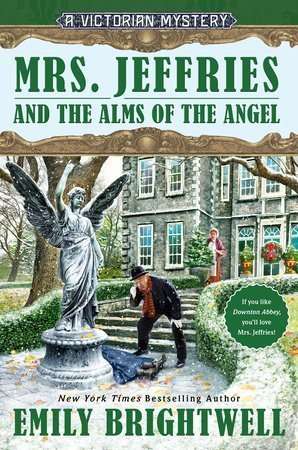 I received a copy of this book free from NetGalley, but all opinions are mine. This post contains links that, if you make a purchase after clicking them, I may make a commission at no cost to you.

Mrs. Jeffries and the Alms of the Angel

Margaret Starling wasn’t the sort of woman anyone expected to be murdered. She was on the advisory board of the London Angel Alms Society, she was an active member of St. Peter’s Church, and, best of all, she was always willing to lend a hand to a friend or a neighbor in need of advice. She was also a wealthy upper-class widow. But money alone won’t protect you when someone decides it’s high time you met your maker.

Margaret’s next-door neighbor considered her an odious busybody, the Reverend Reginald Pontefract wished she’d never set foot in St. Peter’s, and half the advisory board of the London Angel Alms Society heartily hoped she’d come down with pneumonia before the next quarterly meeting.

All in all, Margaret wasn’t as well regarded as she’d always thought she was. But Mrs. Jeffries and Inspector Witherspoon know that justice isn’t a popularity contest, and they won’t rest until they sift through the suspects to catch a sinister scrooge.

Head to Amazon to purchase the book AND read the first chapter!!

My review of Mrs. Jeffries and the Alms of the Angel

This series is one of my favorites. I feel like the staff in Inspector Witherspoon’s household are family. I didn’t start reading the series with book one, so I found out some things about the relationships in the series before they happened. That didn’t bother me a bit because they’re just so good. I did later go back and start with book one, but I still haven’t read them all! So many books so little time. I say all of that to tell you this…even if you haven’t read any of the books in the Mrs. Jeffries series, you can read this! Just jump right in and enjoy a great cozy mystery.

However, if you do plan on starting the series at the beginning, you may want to stop reading this review as there will be spoilers from prior books. “Spoilers, Sweetie.” (Any Doctor Who fans in the house?)

Mrs. Jeffries and the Alms of the Angel is another one of those murders that comes just days before Christmas. And, it’s a good thing it does! We fans know how bored the staff get when they don’t have a murder to help solve. Well, thankfully for them, but sadly for the victim, they get a murder when an advisory board member of the London Angel Alms Society gets her head bashed in. Who would want to hurt Mrs. Starling? She’s an upstanding member of society and the church. Her servants love her. Though she’s been acting oddly the past several weeks, no one knows why someone needed to silence her.

What I really enjoyed about this particular Mrs. Jeffries book was that Inspector Witherspoon was much more confident in his abilities to solve the crime. I think with each book, though the staff still help out (unbeknownst to him), he becomes more assertive and knowledgeable. Isn’t that how we all are? The more we do a thing, the better we become at doing it.

Though the Inspector is kind and forgiving to a fault, he (no spoilers!) MAY have finally had enough with Nivens. We know from prior books that the Inspector always gives Nivens the benefit of the doubt. You need to read this one to see if he still does.

One thing I missed in Mrs. Jeffries and the Alms of the Angel was the staff’s involvement. Yes, they were still involved in the case, but there were fewer scenes for many of them when it came to “interviewing” staff, neighbors, witnesses, etc. I’m not sure if that’s due to the length of the book (it’s not really any shorter than the others) or the fact that the Inspector is getting better at his job.

I definitely recommend this series to all of you cozy mystery fans. And, like I said, just jump right in with this book if you don’t have time to read the 37 (!!) prior books. That the books are set in Victorian London is a plus for me. It’s one of my favorite time periods for mystery books! Add this one to your lists for a quick, fun, cozy read.

Thanks for sharing!
« 5 Tips to Living a Better Life
Ways Pets Relieve Stress and Anxiety »