You are here: Home / Books / Clean Romance / The Thief of Lanwyn Manor by Sarah E. Ladd Book Review
Thanks for sharing!

In this sweet Regency romance, Julia knows Matthew Blake, copper mine owner and very eligible bachelor, is the gentleman she should set her eyes upon. But why can’t she steal her gaze away from his younger brother, Isaac? The Thief of Lanwyn Manor is the second book in the Cornwall series. If you haven’t read the first book, don’t worry! You can read this one as a stand alone though I loved The Governess of Penwythe Hall and think you should read it too! 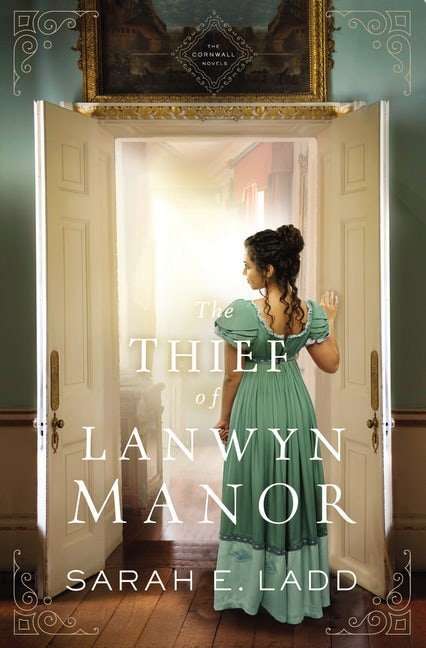 I received this book free from NetGalley. I was not required to do a review. This post contains links from which I may make a commission if you make a purchase.

The Thief of Lanwyn Manor

Cornwall, England 1818—Julia Twethewey needs a diversion to mend her broken heart, so when her cousin invites her to Lanwyn Manor, Julia eagerly accepts. Lanwyn Manor is at the heart of Cornwall’s mining industry, and as a guest Julia is swept into its intricate world. It’s not long, though, before she realizes something dark lurks in the home’s ancient halls.

As a respected mine owner’s younger son, Isaac Blake is determined to keep his late father’s legacy alive through the family business, despite his brother’s careless attitude. In order to save their livelihood—and the livelihood of those around them—the brothers approach the master of Lanwyn Manor with plans to bolster the floundering local industry. Isaac can’t deny his attraction to the man’s charming niece, but his brother has made his intentions to court the lovely guest clear. And Isaac knows his place.

When tragedy strikes, mysteries arise, and items go missing, Julia and Isaac find they are pulled together in a swirl of strange circumstances, but despite their own best efforts to bow to social expectations, their hearts aren’t so keen to surrender.

Praise for The Thief of Lanwyn Manor

“Northanger Abbey meets Poldark against the resplendent and beautifully realized landscape of Cornwall. The thinking woman’s romance, The Thief of Lanwyn Manor is an unputdownable escape.” —Rachel McMillan, author of the Van Buren and DeLuca series

“Julia Twethewey joins Ladd’s collection of clever heroines and along with the honorable (and Poldark-esque) Isaac Blake, their story anchors the foray into Cornwall’s copper mining legacy with historical accuracy and brilliant heart.” —Kristy Cambron, bestselling author of The Lost Castle series

I loved The Thief of Lanwyn Manor. Clean Regency romance novels are among my favorite genres. Furthermore, I adore the setting of the novels in this series. As I’ve said in the past, I’m fascinated by Cornwall…well, I’m fascinated by England in general, but who among us Regency romance lovers isn’t? Though I’ve never ridden a horse in my life, if I were living in this time period I’m sure I would be riding my horse while letting the wind blow through my hair (well, the strands that have escaped from my appropriate updo). And if I were Julia, I’d be wanting to come across a certain gentleman on my rides.

Julia has come to Lanwyn Manor to mend her broken heart. The man she thought she would marry turned out to be a scoundrel, so she’s come to keep her pregnant, bed-ridden cousin company. She’s shocked at her cousin’s condition, and I would have been too! I wanted to scream at the doctor for thinking “bleeding” her would help her morning sickness. Well, her morning sickness was the type that lasted all day for 9 months. My own cousin went through that with her second pregnancy. If her doctor had recommended bed rest and bleeding…he would have had another thing coming! But, ah, the days of the uninformed medical practitioners….

Throughout the book, we’re introduced to the Blake brothers…twins. Julia’s aunt finds every way possible to bring Julia and Matthew (the eldest by minutes) together. Since Matthew owns his family’s manor and mine, of course he’s the better match. But it’s Isaac who has compassion and a strong moral code. So, it’s Isaac you’ll all be rooting for as you read The Thief of Lanwyn Manor.

The plot itself is filled with so much: romance, action, adventure, sadness, worry, betrayal… In the end, you will be surprised at how things turn out. Not everyone is as they seem.

I highly recommend this second book in The Cornwall Novels, The Thief of Lanwyn Manor. You are going to love it!

Sarah E. Ladd received the 2011 Genesis Award in historical romance for The Heiress of Winterwood. She is a graduate of Ball State University and has more than ten years of marketing experience. Sarah lives in Indiana with her amazing family and spunky golden retriever. Visit her online at SarahLadd.com; Facebook: SarahLaddAuthor; Twitter: @SarahLaddAuthor.

Thanks for sharing!
« 11 Must-Haves for Your Home Office
What Low Self-Esteem Can Lead To If Left Unchecked »