You are here: Home / Books / Silly Books for Reluctant Middle Grade Readers
Thanks for sharing!

I love to read. My memories of childhood include lots of books. But back then, in the “old days,” we didn’t have a TV for everyone in the family. There was one TV, so if you didn’t like what was on, you found something else to do. Now kids have TVs in their rooms, iPads, Smart Phones…everything that they can watch! What happened to reading? I think it’s time to get back on the book bandwagon! So, today I’m sharing seven books from MacKids (Macmillan Children’s Publishing) that I think your kids will love!

These three silly series with silly books are books your kids will have fun reading! These fun, wacky books make the perfect gift as will this fun joke book!

Thor you say? I love Thor! 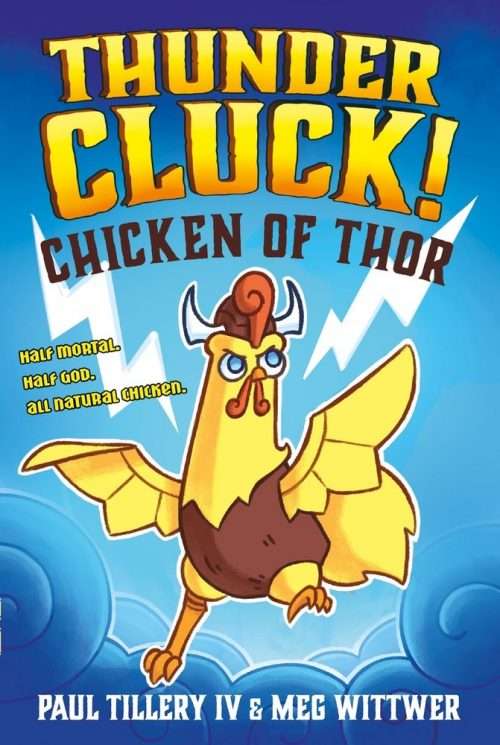 Cancel your dinner plans and dig in to Thundercluck! by Paul Tillery IV and Meg Wittwer. This is the first book in a hilarious new series stuffed with Norse mythology, black-and-white illustrations by the dozen, and a superhero chicken ready to ruffle some feathers.

When an evil chef faces off against the god Thor, a hen’s egg is caught in the crossfire and hatches into powerful chick called Thundercluck, beloved by the gods but a target for evildoers everywhere. For his own safety, the young chicken must fly the coop and hide out on Earth. But when the Under Chef returns and threatens to make the hens of Valhalla into rotisserie, Thundercluck scrambles to reclaim the power of thunder and hatch a plan to defeat him.

“This rousing adventure introduces a new hero to the world . . . [An] epic debut.” —Booklist

“This absurd premise delivers on its goofy humor . . . for those readers not yet ready for Percy Jackson.” —Bulletin of the Center for Children’s Books

Not convinced yet? Go read Chapter One here. 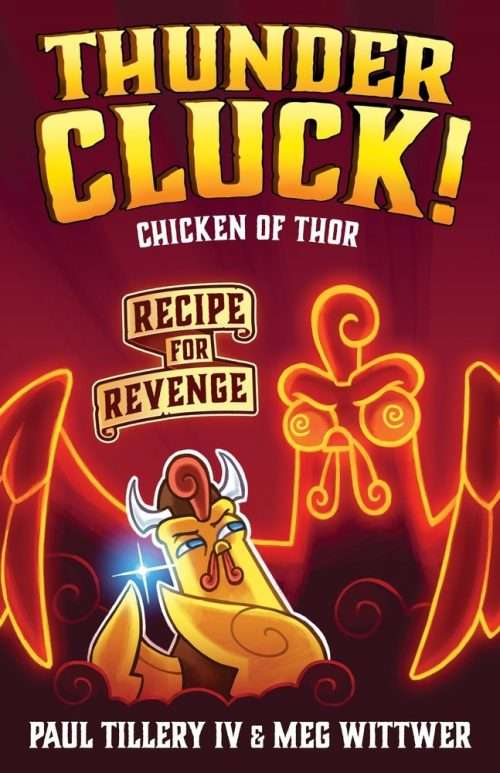 The chicken of the Norse god Thor, bewitched with the power of thunder and lightning, returns to action in Thundercluck! Chicken of Thor: Recipe for Revenge—written and illustrated by Paul Tillery IV and Meg Wittwer.

The mighty chicken Thundercluck is in trouble. He and Brunhilde have run a-fowl of the gods of Asgard, and the best friends must fly the coop. But when a seasoned foe serves up more danger, it’s out of the frying pan and into the fire for these plucky heroes. Can their friendship handle the heat . . . or will they both be cooked?

“For mythology-loving readers who are too young for Rick Riordan.” —School Library Journal

“Tillery dishes out bountiful allusions and wordplay both smart and silly . . .[along with] chirpy dialogue, rat-a-tat action, and spry illustrations.” —Publishers Weekly

Read an excerpt from this second, fun Thundercluck! book! 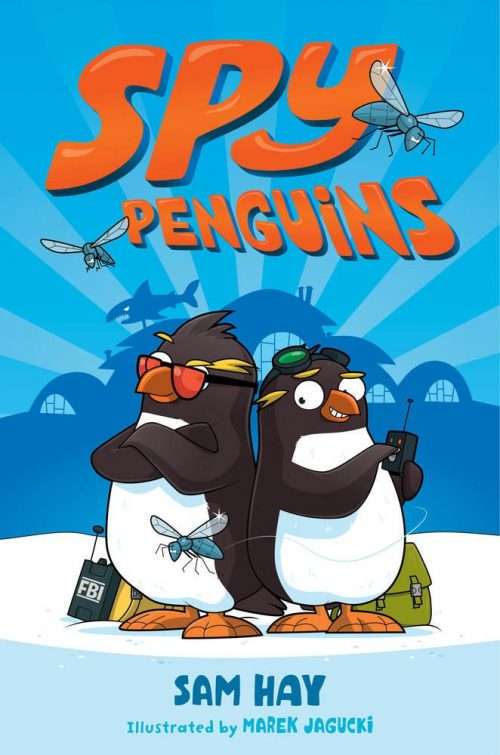 Adventure-loving penguin Jackson dreams of being a secret agent like his Uncle Bryn, who works for the Frosty Bureau of Investigation. Jackson and his gadget-inventing best friend Quigley might officially be too young to join the FBI, but they aren’t going to let that stop them! They just need to come up with the right plan to prove that they are worthy.

But when one of Q’s inventions goes dangerously wrong, Jackson suddenly finds himself dropped right in the middle off an FBI stakeout. There’s fishy business afoot at the city’s aquarium; rare fish are vanishing and not even the FBI can work out what’s going on. It’s up to Jackson and Quigley to solve the crime!

Want to read an excerpt of the book? Go here! 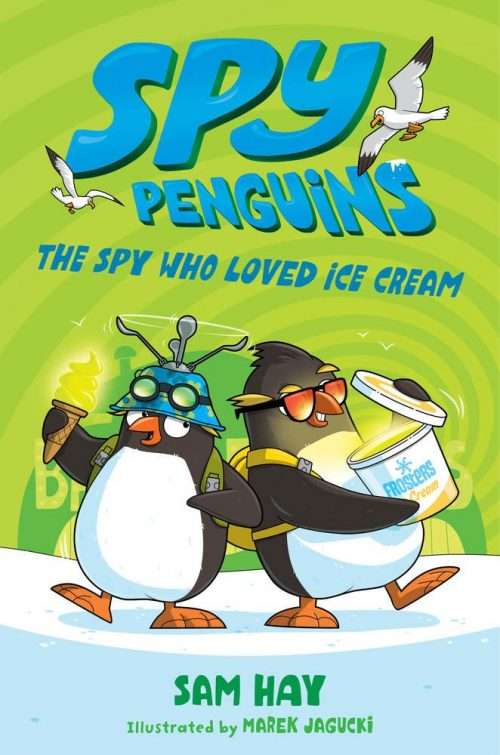 In this hilarious second novel in Sam Hay’s action packed illustrated chapter book series, Spy Penguins, two young adventure-loving and gadget-obsessed penguins must prove their favorite uncle is innocent before the Frosty Bureau of Investigation locks him away forever!

Jackson and Quigley were this close to joining the FBI (Frosty Bureau of Investigation), until Jackson’s mom found out and they ended up scrubbing seagull poop instead. At least they have Uncle Bryn’s birthday party to look forward to. But when they get to the Ice Cream parlor, the FBI agents are acting strange. Instead of talking, Uncle Bryn and his friends just finish their glowing green ice cream, then jump into a waiting ice cream truck and disappear.

It’s obvious that something has gone very, very wrong, and now Uncle Bryn is suspected of being a master thief! Can Jackson and Quigley solve the case before Uncle Bryn is locked away forever?

Go read an excerpt from Spy Penguins: The Spy Who Loved Ice Cream! 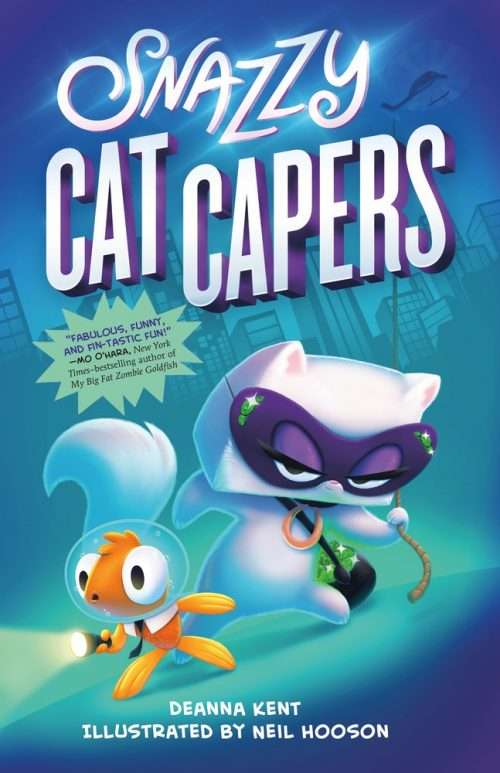 “I want to be Ophelia when I grow up!! And I want Oscar to be my BFF—Best Fishy Friend! Snazzy Cat Capers is fabulous, funny and fin-tastic fun with illustrations that pounce off the page.”
—Mo O’Hara, New York Times bestselling author of the My Big Fat Zombie Goldfish series

Life is short. Diamonds are fur-ever.

Can the smartest, stealthiest, and snazziest of cats learn to work with a fintastic sidekick and prove she’s still the world’s most purr-fect burglar?

This book has Common Core connections.

“Classy bad girl Ophelia is as funny as she is furry…she’s the pussycat love child of James Bond and Zsa Zsa Gabor, and who can’t love that?” —Kirkus Reviews

“More than a just sharply dressed classy kitty… Ophelia and Fishgerald squabble and lob quips with amusing ease.” —Bulletin of the Center for Children’s Books

Snazzy Cat Capers: The Fast and the Furriest 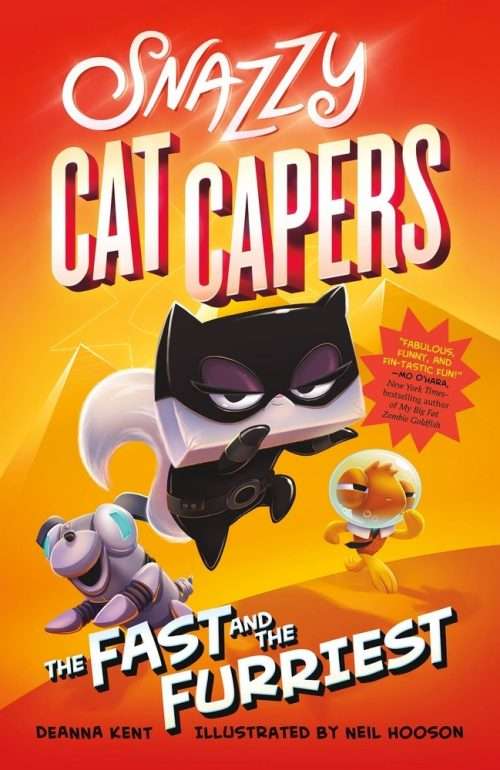 Save the world. Live to tell the tail.

So when a thief steals a dangerous artifact from its vault, the Furry Feline Burglary Institute (FFBI) puts Ophelia in charge of stealing it back.

But when the cat’s away, the dogs will play. The Central Canine Intelligence Agency (CCIA) is hot on her tail―and they want the artifact for themselves!

She’ll need some dashing disguises, great gadgets, and even a robo-dog to save the world in style!

This book has Common Core connections.

Read an excerpt from this book here! 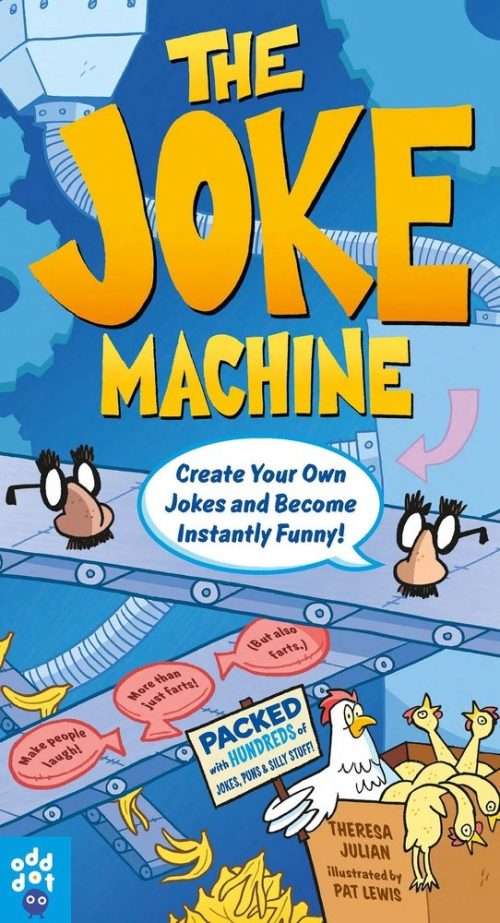 A JOKE BOOK THAT TEACHES YOU HOW TO BE FUNNY!

Follow a cast of fictional funny experts into the Laugh Lab, a hilarious joke-building factory that teaches middle-grade readers how to create their own jokes, puns, silly one-liners, and more. Each chapter explores a different style of joke making, such as surprise, understatement, and exaggeration, and includes hundreds of hilarious examples.

By the end of the book, readers will have a set of tools in their joke belt to make their friends and family actually LOL.

The book includes more than 500 family-friendly jokes—plus zillions that you can create on your own!

These books are all so much fun! Which one of these silly books would your reluctant reader like best? I’d love for you to share with me!

Thanks for sharing!
« Looking After Your Elderly Parents
Caring For A Loved One With Depression »