You are here: Home / Books / Murder Makes Scents by Christin Brecher Guest Post
Thanks for sharing!

Welcome to the virtual book tour for Murder Makes Scents. I’ve got a wonderful guest post from the author. She talks about feeling at home in the bookstore. Stop by to read more about her book too! 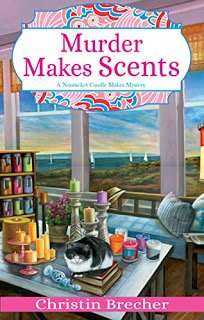 Stella Wright loves creating candles at her Nantucket store—and she also has a burning passion for justice. Now, after visiting a perfume conference, she must solve a vial crime . . .

Stella and her globe-trotting mom, Millie, have come home from a perfume industry conference in Paris, where their trip was marred by witnessing the stabbing death of a young man. It’s a relief for Stella to be back on her picturesque island, with the comforting company of her cat, Tinker. But lingering danger may have followed them back across the ocean.

After someone breaks into her candle store, the Wick & Flame, Stella starts feeling spooked. And just as things threaten to ignite, Millie suffers a blow to the head. Stella receives an anonymous note claiming that her mother smuggled a secret formula out of France—and threatening her life if it isn’t returned. Now Stella’s picked up the scent of a cold-hearted criminal and an intriguing puzzle, and things are about to get wicked . . .

Thanks to author Christin Brecher for providing this guest post for us! I love bookstores too, and I’m very jealous that she lives in NYC. I’ve always wanted to live there…I’m pretty sure Sesame Street had a lot to do with that fact.

FEELING AT HOME IN THE BOOKSTORE

I suspect that most passionate readers have a special book destination that speaks to them – whether it be bricks and mortar or an online community. For me, that place is The Corner Book Store. Back in 1978, Corner, as it is affectionately known by its customers, opened down the street from me in the Carnegie Hill neighborhood of Manhattan. I lived there then, as I still do now, and the arrival of this store was magical for everyone. Seeing its dark red façade with its gold lettering, I remember thinking, “we’ve hit the jackpot!”

NYC’s Public Library, with its two iconic statues of the lions, Patience and Fortitude, was, and still is, a source of pride for all New Yorkers. With the arrival of Corner, however, we had our own well-edited link to instant literary gratification; one where crisp new book covers greeted all of us as from its windows we headed to work or school in the mornings and back home at night.

The younger set was particularly thrilled about the Corner Book Store because families could open house accounts. One day, I stopped in on my way home from school. At ten years old, I had a feeling I was too old for such nonsense, but I really wanted a book of fairy tales. The owner noticed me lurking about the shelves, and, after seeing me freeze, she kindly came over and helped me pick out Grimm’s Complete Fairy Tales. While doing so, she artfully pointed out that these stories were relevant at any age. Those words gave me confidence to seek out other genres that interested me in addition to the must-reads of my time. I found I liked mysteries, which became a life-long enjoyment.

I was on air when I walked by the Corner Book Store in New York City last summer to see its front window filled with copies of my first book, Murder’s No Votive Confidence. The moment was proof to me that a local independent book store can be the start of a wonderful journey. Tonight, I’m heading back over to celebrate this week’s launch of Murder Makes Scents, to see neighbors and make new friends as I sign books. Come on by!

Do you have an independent book store that is special to you? 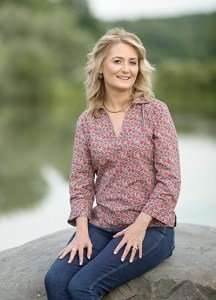 Christin Brecher was born and raised in NYC, where her family and many childhood friends still reside. As such, she feels she is as much of a small-town girl as any. The idea to write the Nantucket Candle Maker series sprang from her life-long connection to the small island off the coast of Massachusetts. Spending summers there as a child, Christin read from her family’s library of mystery novels, after which she began to imagine stories inspired by the island’s whaling heyday, its notoriously foggy nights, and during long bike rides to the beach. After many years in marketing for the publishing industry, followed by years raising her children, Murder’s No Votive Confidence is Christin’s debut novel. Visit her at www.christinbrecher.com.
Author Links
Website – http://christinbrecher.com/
Facebook – https://www.facebook.com/christinbrecherbooks/
Instagram – https://www.instagram.com/christinbrecherbooks/
GoodReads – https://www.goodreads.com/author/show/18483379.Christin_Brecher
BookBub – https://www.bookbub.com/profile/christin-brecher

The Power of Words – REVIEW

I’m All About Books – SPOTLIGHT, EXCERPT

Diary of a Book Fiend – REVIEW

Thanks for sharing!
« Charitable Causes Worth Donating To in the 2020s
Blueberry Cobbler Blackmail by Jodi Rath Guest Post »