You are here: Home / Books / Murder in the Wine Country by Janet Finsilver Guest Post
Thanks for sharing!

Welcome to the Great Escapes Virtual Book Tour for Murder in the Wine Country (A Kelly Jackson Mystery) by Janet Finsilver.  Stop by each blog on the tour for interviews, spotlights, reviews and more!

Murder in the Wine Country (A Kelly Jackson Mystery) 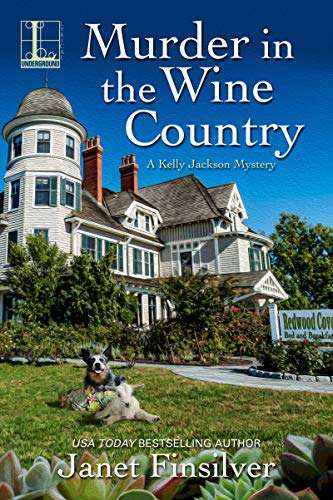 Weeding out killers wasn’t part of the job description . . .

Kelly Jackson, manager of the Redwood Cove Bed and Breakfast, is excited to participate in an event to raise awareness for the plight of struggling veterans in their Northern California coastal community. Local wineries are sponsoring tastings, and to prepare for a culinary competition, professional chefs will forage for wild edible greens. Kelly plans to come along, despite a warning to beware of poachers, who have been stealing the highly valued succulent Dudleya farinosa.

The senior sleuths who call themselves the Silver Sentinels join forces with environmental activists known as the Succulent Saviors to thwart the poaching operation. When a consultant for the sale of a local winery is murdered, the poachers are suspected—but so is a wine merchant, Kelly’s friend Phil. As Kelly and the Silver Sentinels attempt to root out the real killer, what she digs up might just put her permanently underground . . .

Thank you so much for sharing this with us, Janet!

All the books in my series have festivals or events of some type. I borrow ideas from activities I’ve attended in northern California. In Murder in the Wine Country, Michael Corrigan, billionaire owner of Resorts International, has invited some of the wealthiest people in the country to come and visit Redwood Cove Community Center.

This is a place he built to help the local residents by providing services and classes to promote a healthy lifestyle, something the small, isolated town of Redwood Cove had lacked. In addition, cabins had been built to house some of the struggling veterans in the area. He hopes the people he invited will be encouraged to replicate this community support model elsewhere.

In Murder in the Wine Country, Michael Corrigan has put together a three-day affair to educate his guests about the center. They will also have an opportunity to enjoy some of the local food and wine offerings. His event opens on a Thursday with a wine and cheese tasting. A barbecue follows on Friday night and a gourmet food and wine tasting with a Western theme wraps up the experience on Saturday.

I used ideas for the fictional affair in the book from two events I personally attended. One is Sostenuto: A Celebration of Sustainability. This is a fundraiser for the Mendocino Music Festival and takes place a short distance from Mendocino in a private home. The other one is the Lexus Culinary Classic held at Cavallo Point Lodge in Sausalito. The event lasts several days and culminates in the Lexus Grand Tasting which is what I attended.

Sostenuto is held at the home of Linda and Fedele Bauccio on the cliffs above the Pacific Ocean. The word sostenuto in music means to sustain, and they are committed to sustainable food and the continuation of the Mendocino Music Festival. To this end, they host an opening gala each year.

A seasonal buffet is presented throughout their gardens at various stations. The menu has a theme. When my husband and I went, there was a Caribbean theme. When we arrived, we were given straw hats, sunglasses, and several miniature bottles of hot sauce.

Each of the five food areas had a name. At the Caribbean Street Market, we had a choice of different appetizers such as crab and shrimp stuffed gypsy peppers wrapped in bacon and spiny lobster and passionfruit crispy tacos. The Bocce Court had a classic Cubanito sandwich among other things. At the Outdoor Kitchen and Dining Area we found jerk chicken and quinoa coconut mango salad as well as other delectable choices. There were two other areas including, not surprisingly, one with a beautiful assortment of desserts. We had a great time!

My husband and I learned about the Lexus Culinary Classic through his cousin who manages a hotel in Boston and was attending the event. There are some hotel chains that work with Lexus in a variety of ways. The event at Cavallo Point Lodge focuses on Lexus cars and the dining opportunities at the hotels they partner with. The Lexus Grand Tasting is held in a building separate from the lodge. When I entered, I found numerous food stations located around the walls of the room. In the center, wine tasting tables had been set up.

While my husband and his cousin visited, I roamed the room sampling, taking photos, and talking to the chefs. I felt there was a subtle, silent competition for having the most unusual or creative offering. There was some very unique food being served. One was octopus roulade with green garlic coulis, Arbequina olive caponata, and chorizo. Two more were Rougie farmhouse cured duck pastrami, raisin brioche with pickled fennel, and pan-fried Meier north country halloumi, with local greens, smoked tomato jam, and cherry balsamic. No, I didn’t try everything. Some sounded a bit too extreme for my taste!

One of the chefs I talked with that day mentioned how excited she was about going on a local edible hunt she’d signed up for. In Murder in the Wine Country, I have cooks foraging for wild edibles. Another idea I had from attending the Lexus Culinary Classic is the edible gold one of my characters uses in a pie he creates in Murder at the Fortune Tellers Table. I’d never heard of edible gold. I was shocked to find out how many different types were available. I didn’t put it on my shopping list!

I often get asked where I get my ideas for my stories. I’m always on the lookout for something new and interesting to include in my books. I hope you’ve enjoyed this background as to what helped me to create the food and wine events in Murder in the Wine Country. 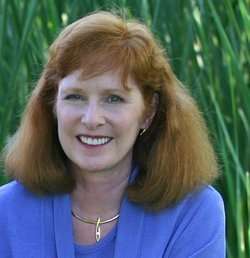 Janet Finsilver is the USA TODAY best-selling author of the Kelly Jackson mystery series. She worked in education for many years as a teacher, a program administrator, and a workshop presenter. Janet majored in English and earned a Master’s Degree in Education. She loves animals and has two dogs—Kylie and Ellie. Janet has ridden western style since she was a child and was a member of the National Ski Patrol. One of the highlights of her life was touching whales in the San Ignacio Lagoon. MURDER AT REDWOOD COVE, her debut mystery, was released on October 13, 2015.