You are here: Home / Entertainment / Are You Afraid of the Dark? on DVD | Get a Craft and Recipe Too!
Thanks for sharing! 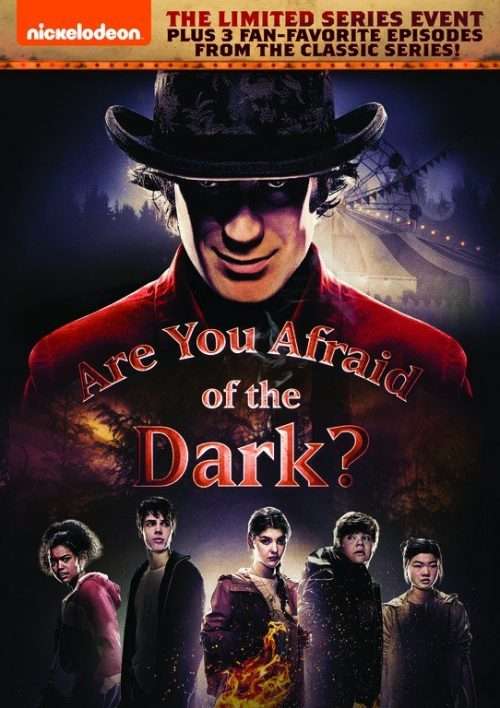 I received this DVD free to review; however, all opinions are my own. This post contains affiliate links. If you make a purchase, I may receive compensation at no cost to you.

Are You Afraid of the Dark?

The three-part limited series follows members of an entirely new Midnight Society, who tell a terrifying tale of the Carnival of Doom and its evil ringmaster Mr. Top Hat, only to witness the shocking story come frightfully to life and prepare for an adventure beyond their wildest nightmares.

A must-own for fans of the classic series, as well as those new to the franchise, the Are You Afraid of the Dark? DVD also includes three fan-favorite episodes from the original series and will be available for the suggested retail price of $13.99.

The new members of the Midnight Society are:

Are You Afraid of the Dark? Episodes

Part One: Submitted For Approval

Special Features (US only)

Original Series Season 1, Episode 2: The Tale of Laughing in the Dark

Original Series Season 4, Episode 8: The Tale of the Ghastly Grinner

My thoughts about Are You Afraid of the Dark?

Aren’t creepy stories awesome? Okay, I know that not all of you appreciate scary stories, but those of you who do will love this limited series based on the 90s Are You Afraid of the Dark? And if you grew up watching the original TV show on Nickelodeon, you’ll appreciate the inclusion of the three original series episodes!

The original show ran from 1990-1996, and I know I watched several of the episodes. Since I was 20 in 1990, I have no idea why or where….But I know I did! It’s so funny watching these three original episodes that are included…boy, did we dress super cool in the 1990s. I’m sure what we’re wearing now will look ridiculous in 30 years. Bummer.

So, about this limited series…Rachel is the new girl in school, but by coincidence, she finds herself invited to join The Midnight Society. To get in, she’s got to tell a story that scares all of the members. Her story centers around a creepy carnival called the Carnival of Doom which is led by Mr. Top Hat. The story is very scary, but things get even scarier when the story starts to come true! I really liked this limited series! The actors were great in this…very convincing! So convincing that your sensitive little ones might find this too scary for them. You know your kids best, but you might want to screen this before them if they get scared easily. 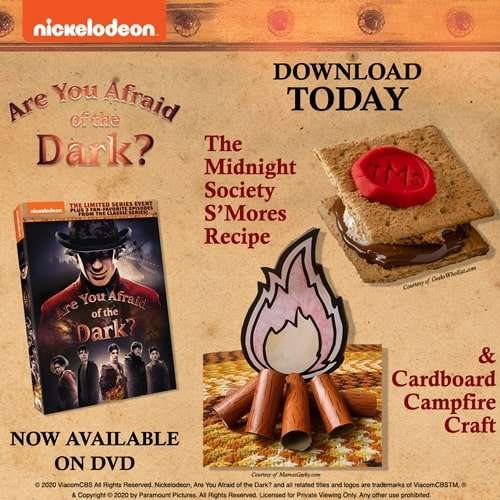 Summer evenings are the perfect time for sharing scary stories around the campfire… but what to do if real fire isn’t an option? And what would a campfire be without s’mores? To celebrate the DVD release of Are You Afraid of the Dark?, I’m excited to share this cardboard campfire craft and s’mores recipe!

Get the directions for the Smores and Campfire here

One winner of a DVD copy of Are You Afraid of the Dark? ends 8/18

Thanks for sharing!
« 10 Ways to Fuel Your Body for Optimal Joint Health
Little Tea by Claire Fullerton | Book Review and Tour »