You are here: Home / Books / Silver Moon by Jenny Knipfer | Book Excerpt and Books
Thanks for sharing!

Welcome to the Prism Book Tours book tour for Silver Moon by Jenny Knipfer. Stop by each blog for excerpts and reviews from the book! 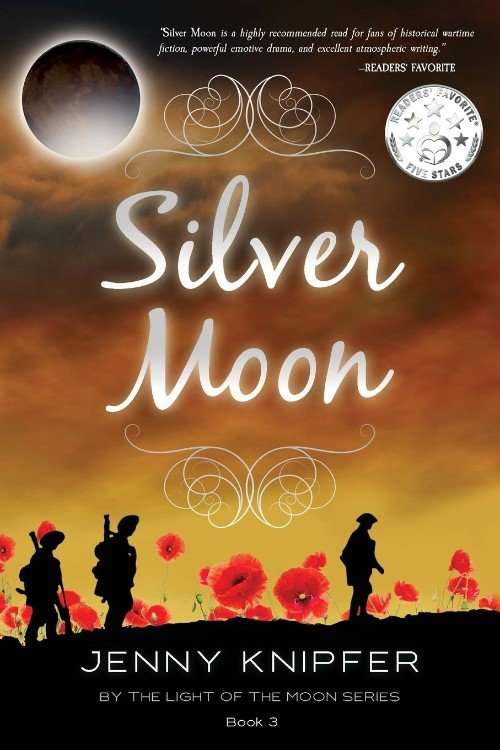 Silver Moon (By the Light of the Moon #3)

A tale of courage and hope in the darkest of times…

Silver Moon, the third book in the series: By the Light of the Moon, paints a stunning and poignant picture of life on the home front in Webaashi Bay, Ontario, and of three men who are a part of the Canadian Expeditionary Force during WWI.

Shamed into joining the war, the tide turns for Luis Wilson when he is steered into the depths of espionage. Injured and presumed missing, will he lose his heart to the very woman who presented him with a white feather?

Oshki and Jimmy offer a grim perspective on life in the trenches. They despair of ever returning home to the women who hold their hearts.

Meanwhile, Lily fights for the cause in her own way and rallies the female troops at home as prejudices run high and the local cafe owner is accused of being a spy.

Will the women of Webaashi Bay receive their men back unscathed? Can the power of love win out over insurmountable odds? All this drama and more plays out under the light of a silver moon.

I lie back and think of the first life I took and the last. Well, the ones I know about. The ones who looked me in the eye before I did my job. Deep down, I wonder what it was all really for. The killing.

I wish I had asked myself these questions a couple of years ago when I signed up for a life of lies. Well, I never volunteered, exactly. I was recruited.

“They tell me you speak French and German. Where does the German come from?” Major Lefebvre eyed me with suspicion. “Not much of them in Ontario.”

I wondered why he asked about my language skills. I answered as concisely and briefly as I could. “When I went to University in Toronto, I had a German roommate.” I shrugged my shoulders. “Languages have always intrigued me, and he taught me how to speak German. I picked it up fairly easily.”

“Ah, that would do it, I suppose.” He rubbed his index finger and thumb together in a repetitive motion. I could see he was thinking, sizing me up for some uncertain fitting. “Your friends call you clever, Lieutenant?”

“I don’t consider myself a stupid man.”
I wondered what all the questions were leading up to.

“Stand up,” the major commanded.
I obeyed.
“Hmm, you look fit.” He examined me for a few moments. “Sit.”
I did.
He got up from his seat behind his desk, walked over to me, leaned down, and inspected my face. “Yes. Passable. The right kind of features.” He spoke slowly, as though deep in thought. “A little too dark of hair perhaps.”

He didn’t answer. Instead, the major moved back to his seat and plied me with another question. “You love your country, son?”

I scratched the itchy spot on my jawline hosting a bit of razor burn. “Of course. It’s why I signed up.”

My conscience told me I lied. Shame had been the motivating factor.

Major Lefebvre rested his large hands on the paper-covered desk and narrowed his eyes in a no-nonsense way. “I seek a few qualified men for special . . . missions.” He tapped his fingers. I watched them move like keys on a piano. “Secret missions.”

I couldn’t fathom what he hinted at. “Missions, sir?”

“Yes, Wilson. Missions.” His eyes bored deeper into mine. “You cannot tell anyone—and I mean anyone—if you decide to accept our proposal.”

“What do these missions involve, sir?”

“Covert operations. Espionage. I’m specifically looking for men to place in the enemy’s ranks. Men who will . . . fit in.” He took a deep breath and extended his right pointer finger at me. “I believe you to be one such man.”

He stunned me with his words. “Do you mean to say I would be spying for Canada, for the Allies, as a German officer?”

“Leave it to us, Wilson. While the rest of the men leave for France, you and a few others will stay behind and be transferred to our newly developed—SECRET, I might add—training facility. Once done there, you’ll have your first assignment, but you will also serve as the other men do, so no one suspects anything.” He leaned back in his chair and continued in a more relaxed voice.

“Now, you’ll have times of immersion in your persona and periods of sustainment until the information we seek has been acquired, but all under the guise of a regular serviceman. Do you understand?”

He waited for my response. I didn’t know what to say. I looked out the window at the men lined up in rows, being taught how to march to their deaths before a sea of white, canvas tents, and noticed that it snowed—such tiny crystals, but capable of wreaking havoc under the right circumstances. I felt small in the scope of things, of the war. Maybe I could be more than just a tally mark on a page with a gun.

“You’re needed, Wilson,” the major added. “Will you answer the call?”

I took a deep breath and sealed my fate. “I will.”

Taking an original angle on a tumultuous time in history, Silver Moon by Jenny Knipfer is a sparkling slice of historical fiction. Ambitiously detailing a diverse collection of characters, this World War I story bounces across space and time, delicately filled with vivid descriptions, nuanced moral dilemmas, and authentic relationships…” —Self-publishing Review

“I am stunned by the amount of detail the author gave in this single story. On one hand, we have powerful characters… and on the other, we have a plot that demands all our attention. Jenny Knipfer pulls no punches and holds nothing back.” —Readers’ Favorite

Jenny lives in Wisconsin with her husband, Ken and their pet Yorkie, Ruby. She is also a mom and loves being a grandma. She enjoys many creative pursuits but finds writing the most fulfilling.

Jenny’s education background stems from psychology, music, and cultural missions. She spent many years as a librarian in a local public library but recently switched to using her skills as a floral designer in a retail flower shop. She is now retired from work due to disability.

She authored and performed a self-published musical CD entitled, Scrapbook of a Closet Poet.

Jenny’s favorite place to relax is by the western shore of Lake Superior, where her novel series, By The Light of the Moon, is set. She has self-published the first three books, Ruby Moon, Blue Moon, and Silver Moon, in her four-part series. One more novel to complete the series is planned for 2020. She is currently writing a new historical fiction series called, Sheltering Trees. 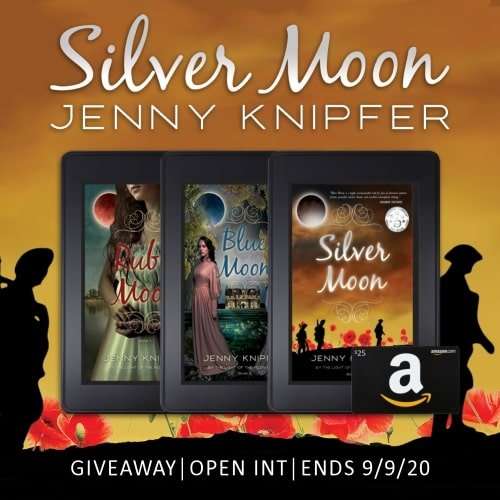 One winner will receive ebooks of all three books in the By the Light of the Moon series by Jenny Knipfer (Ruby Moon, Blue Moon and Silver Moon) and a $25 Amazon eGift Card

Open internationally to those who can use one of Amazon’s branches
Ends September 9, 2020

Thanks for sharing!
« 7 Smart Ways To Give Your Home Decor A Touch Of Luxe
Sneaky’s Summer Mystery: A Cobble Cove Story by Debbie De Louise »