You are here: Home / Books / Hamelin Stoop Book Series by Robert B. Sloan | Guest Post
Thanks for sharing!

We’re celebrating the release of the third book in the Hamelin Stoop series, The Ring of Truth! Today, the author talks about the inspiration for the series. Next, on Wednesday, January 13th, he’ll be talking about the storybook world of Hamelin Stoop HERE. Come back HERE on Friday, January 15th, to read an excerpt from book three. Plus, there’s a giveaway to enter below. Enjoy! 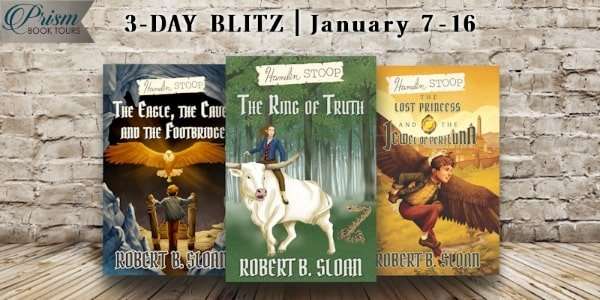 The Eagle, the Cave, and the Footbridge
(Hamelin Stoop #1)

Afraid of being caught by trackers from another world, a young mother abandons her baby boy in a tomato box inside the screened porch of a children’s home. The staff at the orphanage name him Hamelin Stoop, but he grows up longing to learn his real name, find his parents, and thus discover his true identity.

Life is not easy for Hamelin. He belongs to everyone, though in some ways to no one fully. And the people he is closest to leave him one by one. A letter from an older friend advises Hamelin to “keep waiting and keep hoping.” Bitter experiences force Hamelin to wait, but he has to learn how to hope.

When the children’s home forgets his eighth birthday, he sneaks away at night. He soon discovers that he isn’t just running away — he is being summoned by the Ancient One. Guided by the Great Eagle through a mysterious cave, Hamelin must pass a dangerous test of courage before he can find his parents.

Hamelin’s failures, fears, and hopes become part of a larger story, a story of a great struggle between worlds and kingdoms where the old myths of magic, evil contracts, and enslaved children turn out to be real.

The Lost Princess and the Jewel of Periluna
(Hamelin Stoop #2)

Hamelin finally makes it across the footbridge only to learn that his quest to find his parents and learn his true identity will not be quickly done or easy to fulfill. The Great Eagle leads him through the dangerous Waters of Death and Life and into the Land of Gloaming, where Hamelin is thrown into the midst of a war already being waged between the evil Chimera and the mysterious Ancient One. He must help two new friends find a kidnapped princess and recover a stolen jewel, tasks for which they have special gifts that must not be misused: a scarf of sight, shoes of speed, and a sword of death. But these quests are only part of the larger story, a story including Chimera’s plan to use Hamelin—a child of two realms—to seize the kingdoms on both sides of the Atrium of the Worlds.

The Ring of Truth
(Hamelin Stoop #3)

Will Hamelin be summoned again?

Hamelin suspects that his friend Layla is the lost princess from the Land of Gloaming. As he describes his daring adventures to trusted friends at the children’s home, an intricate tapestry of stories emerges. Layla admits that she has had dreams – or are they memories? – of another world with faded light. The orphan boy is not alone in his struggle to learn the truth, search for family, and question the Ancient One’s purposes.

Meanwhile, dangerous forces continue to pursue the boy of both worlds, but the evil Chimera gives his agents an additional task: find the fourth princess, the missing daughter of Carr, and stop her. She must never return home.

Guest Post: The Bible, the Pied Piper, and Hamelin Stoop

Do you remember the legend of The Pied Piper? When I was young, I was attracted to many stories of myth and magic, but it was this story that I longed to see finished. It is the story of the lost children of Hameln town. The children were seduced into following the alluring music of a cunning piper (their parents failed to live up to the contract made with the Pied Piper, and he stole the children to exact their unpaid debt and avenge his wounded dignity), who led them into a magic mountain, never to be seen again. Only a few witnesses were left to go back so that the parents would know what they had done, that it was their fault the children were taken.

My childhood mind was troubled. What happened to the children who were taken away? Could they ever be rescued and come home? What about their parents and the pain they felt? Would it ever be relieved? Even today the town of Hameln has an old stained glass window commemorating the loss of the children, as well as historical documents and inscriptions that place the great loss on June 26, 1284, the day of Saints John and Paul. Will Hameln always endure the shame of its treachery? The answers are – nothing will ever be the same until the children are restored to their town and families. But how?

I lived with that painful non-ending until one day the story of the Bible and the legend of The Pied Piper connected in my imagination. The story of the Bible is also unfinished in the Old Testament, and though the beginning of the hoped for ending is picked up again in the New Testament and carried forward substantially through the story of Jesus, it remains still unfinished on the stage of history. I think the stories connected in my mind because both are unfinished, with exiles who have yet to be brought home.

Once I filled out a larger narrative for the world and backstory of The Pied Piper, the Hamelin Stoop series was born.

Robert is married to his college sweetheart, Sue. With seven married children and over twenty grandchildren, they enjoy large family gatherings with good food and lively conversation around the table. Favorite family activities include role-playing games, writing and reading stories, and, of course, storytelling. Robert is also a University president and scholar. 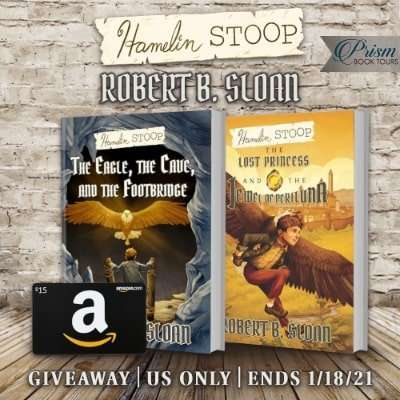 One winner will receive print copies of The Eagle, the Cave, and the Footbridge and The Lost Princess and the Jewel of Periluna plus bookmarks and a $15 Amazon Gift Card (US only)