You are here: Home / Books / The Nature of Fragile Things by Susan Meissner | Book Review
Thanks for sharing!

April 18, 1906: A massive earthquake rocks San Francisco just before daybreak, igniting a devouring inferno. Lives are lost, lives are shattered, but some rise from the ashes forever changed.

The Nature of Fragile Things 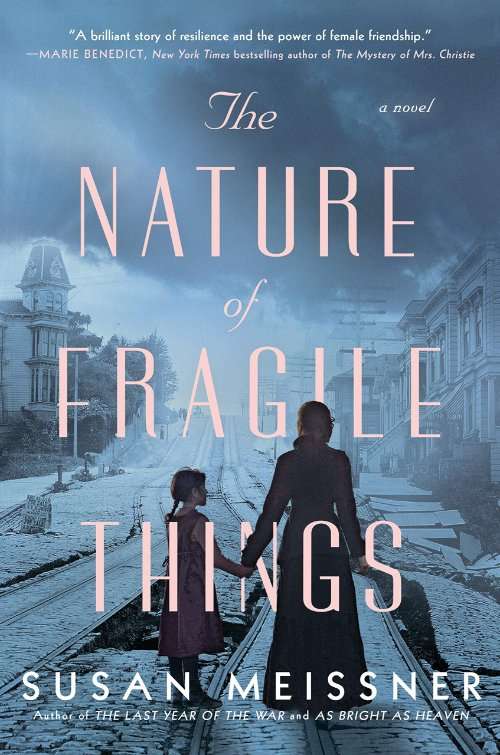 I received an ARC of this book free from NetGalley; however, all opinions are my own, and I was not required to give a review. This post contains affiliate links. If you make a purchase, I may receive compensation at no cost to you.

Sophie Whalen is a young Irish immigrant so desperate to get out of a New York tenement that she answers a mail-order bride ad and agrees to marry a man she knows nothing about. San Francisco widower Martin Hocking proves to be as aloof as he is mesmerizingly handsome. Sophie quickly develops deep affection for Kat, Martin’s silent five-year-old daughter, but Martin’s odd behavior leaves her with the uneasy feeling that something about her newfound situation isn’t right.

Then one early-spring evening, a stranger at the door sets in motion a transforming chain of events. Sophie discovers hidden ties to two other women. The first, pretty and pregnant, is standing on her doorstep. The second is hundreds of miles away in the American Southwest, grieving the loss of everything she once loved.

The fates of these three women intertwine on the eve of the devastating earthquake, thrusting them onto a perilous journey that will test their resiliency and resolve and, ultimately, their belief that love can overcome fear.

We Americans know our country’s history, right? I mean, of course, we’ve at least heard about the great San Francisco earthquake of 1906…at least if you went to school when I did….I don’t know what they teach now! But, let’s assume you know that there was a horrible earthquake way back in the olden days. It was so long ago, so it doesn’t faze us. We don’t consider the enormity of it…that is until we read a novel, albeit fiction, which gives us an in-your-face look at this earthquake.

The Nature of Fragile Things does just that. It makes us care about the characters and throws them into this historical catastrophe.

We first meet Sophie as she is traveling west from New York City to marry a man she’s never met. She knows that he is a widower who needs a mother for his daughter, and Sophie is desperate to escape the appalling tenement in which she lives. If you have ever watched or read anything that realistically portrays the NYC tenements, you can’t blame her for wanting to escape. Surely nothing could be worse than her current situation. Though her situation is better, it is odder.

And the story begins. Once you pick this book up, you won’t put it down. The Nature of Fragile Things is perfectly paced with twists you won’t see coming. The earthquake hits, and the city is in utter chaos. Susan Meissner gives a richly detailed account (albeit a fictional account) things that happened during and after the earthquake, and you start remembering that the San Francisco earthquake was a real thing. It’s history to us; it was their reality. It wasn’t just the earthquake that was devastating; there were fires burning; people were injured with no place to go; people are homeless. It’s just overwhelming to think about. And the earthquake is only part of the story!

You’ve got to read this book for yourself to grasp just how amazing this novel is. It’s got unforgettable characters and an unforgettable story. It portrays women finding the strength to do more than they ever thought they could. Unexpected friendships are forged. I loved everything about The Nature of Fragile Things. I can’t say enough good things about this story. You’ll be mesmerized.

Susan Meissner is the USA Today bestselling author of historical fiction with more than half a million books in print in fifteen languages. Her novels include The Last Year of the War, a Library Reads and Real Simple top pick; As Bright as Heaven, which received a starred review from Library Journal; Secrets of a Charmed Life, a 2015 Goodreads Choice award finalist; and A Fall of Marigolds, named to Booklist’s Top Ten women’s fiction titles for 2014.

She is also RITA finalist and Christy Award and Carol Award winner. A California native, she attended Point Loma Nazarene University and is also a writing workshop volunteer for Words Alive, a San Diego non-profit dedicated to helping at-risk youth foster a love for reading and writing.