You are here: Home / Books / Sunder of Time by Kristin McTiernan | Book Excerpt
Thanks for sharing!

Welcome to the Prism Book Tour for Sunder of Time by Kristin McTiernan. Stop by each blog for excerpts and reviews from the book! 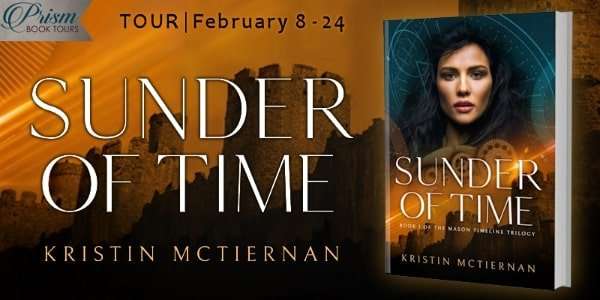 Sunder of Time (The Mason Timeline #1) 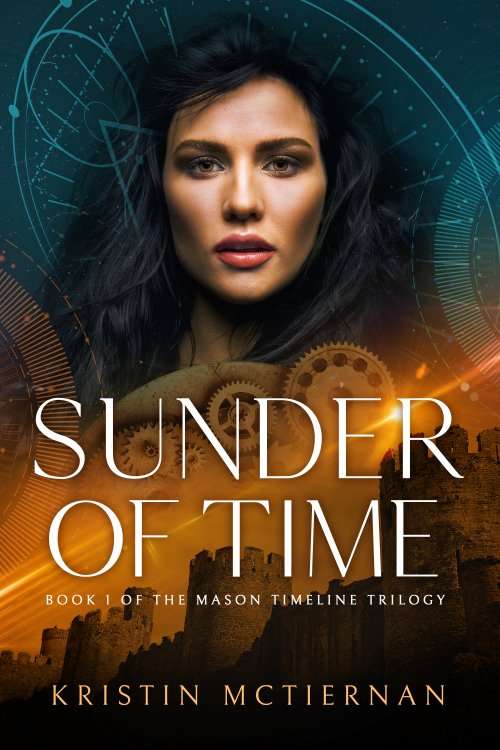 This post contains affiliate links. If you make a purchase, I may receive compensation at no cost to you.
Sunder of Time
(The Mason Timeline #1)
Time Travel/Alternate History
Paperback & ebook, 380 Pages
May 12, 2015

Isabella Jaramillo is accustomed to getting what she wants.

Living a comfortable life as the daughter of the world’s sole time travel magnate, Isabella has never suffered the irritation of being told no.

Only now she has gone too far and her soon-to-be ex-husband tells her no in the most vengeful way possible—by sabotaging her trip to the past, sending her to a distant land where the locals do not speak her language and are far from impressed by her haughty demeanor.

Now a slave, Isabella makes some surprising allies and discovers the truth behind her father’s rise to power and the terrible price the entire world paid for it. Somehow, she must break free and find a way home, not only to save herself, but to restore history to its rightful direction.

A chirp from his port phone brought Alfredo to attention. He jumped out of his seat so he could more easily reach into his pocket. With sweaty palms, he retrieved the phone, looking anxiously at the caller ID.

“Hello Guillermo,” he said unhappily. He was hoping it was someone with news of Isabella.

“Please forgive me for calling you so late, Don Jaramillo. Have you heard any news?”

The young man sounded so desperate, but Alfredo couldn’t muster the energy to create false confidence for him. “No, Guillermo. He just sits there, refusing to talk. If he does speak, it’s just to spew hatred. We have as many Agents as we can spare looking all over Europe in different time periods. The techs are doing what they can to pinpoint temporal disturbances.”

“But you don’t even know she is in Europe! He could have put her in Antarctica!” Guillermo took in a shaky breath. “Did the sensors tell us anything?”

“Only that Etienne was the one who tampered with the console. The main computers were tasked with recording destinations, but the bastard got around them.” He felt his throat close. “He’d rather die than tell us where she is.”

Alfredo appreciated Guillermo’s silence on the other end of the phone. He looked up at the ceiling and heavily sat back down on the sofa, willing his tears away.

“Don Jaramillo,” said Guillermo, obviously clearing the lump in his own throat. “You shouldn’t be in that terrible place. I would be honored if you would stay in my home during the investigation. My sister is here with me. She’s a very good cook.”

Unable to even smile at the kind invitation, Alfredo just tried to sound grateful. “Your offer is generous, but I can’t leave here. I cannot sit in comfort without knowing what kind of hell he sent my daughter to.”

Other Book in the Series

At first, she thought they’d do the right thing. A new timeline created by a misbehaving time traveler, a whole society crushed under theocratic oppression. Surely, the council would see reason. Surely, they’d help her fix the timeline.

Now jailed and under the constant, unblinking eye of her own personal guard, Shannan must fight not only for her freedom, but for her own sanity.

Her one ally is Paul Canaan, a member of the Council but not truly one of them. Living a life of secrets and lies, Paul works in the shadows to free Shannan, and himself, from the artificially created timeline oppressing them both.

Together, Shannan and Paul will have to escape their watchers—before they, and the world, are trapped in a history that should never have been.

About the Author of Sunder of Time

Kristin McTiernan was born the daughter of a career military man and spent her childhood bouncing from one country to another. Her love of writing surfaced early, and upon discovering the double threat of comic books and Star Trek in middle school, Kristin spent the majority of her spare time creating new worlds and interesting people to populate them. Following in her parents’ footsteps, Kristin enlisted in the Marine Corps at 17 and, upon her discharge three years later, settled into a life pursuing her love of words. She achieved her bachelor’s degree in English from Emporia State University in her home state of Kansas and works as an editor to support her writing addiction. She lives in Kansas City with her husband and dog. 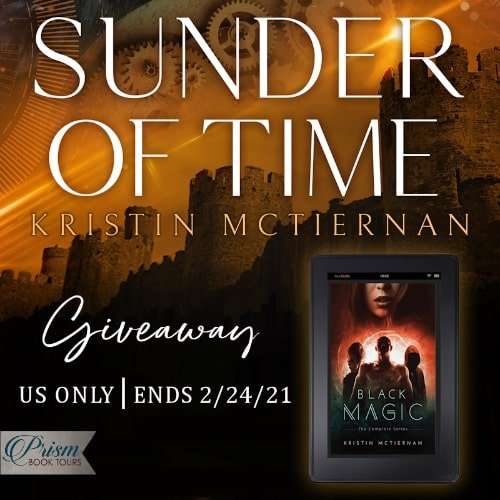 One winner will win a Kindle gifted copy (gifted directly through Amazon) of Kristin McTiernan’s supernatural mystery trilogy: Black Magic Omnibus: Books 1 – 3 of the Siren Song Series (US only)

Thanks for sharing!
« Health Problems You May Spot In Older Dogs
The Heritage Heist (Century Cottage Cozy Mysteries) by Dianne Ascroft | Book Review »