Welcome to my stop on the Great Escapes Virtual Book Tour for Murder on Honky-Tonk Row Ghost & Camper Kooky Mystery by Rita Moreau. Stop by each blog on the tour for interviews, guest posts, spotlights, reviews and more! 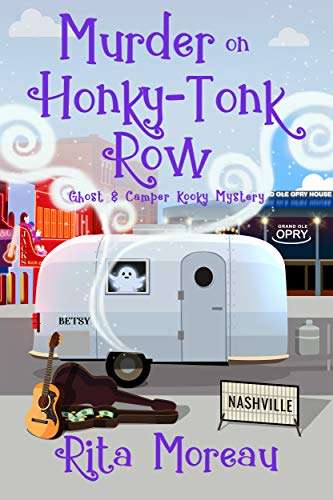 Will camping in the country music capital have Mabel kicking up some saw dust… or line-dancing to her doom?

Despite their good deed in Savannah, Mabel Gold’s ghostly friend Irma remains stuck in Purgatory. So when the plucky sixty-something divorcée pulls her haunted vintage camper into a Nashville campground, she’s expecting Irma to accompany her on the tour of the Grand Ole Opry. But as they two-step into a honky-tonk for some live tunes, they’re shocked to encounter two lost spirits stranded there for the past twenty years after their double homicide.

Though St. Peter hints that solving the long-closed case could get Irma through the Pearly Gates, Mabel has little time to uncover the culprit before she’s due to boot-scoot off to the Badlands. But when shady financials surface and threaten to ruin the honky-tonk owner’s run for governor, trying to help the poor souls pass on could land the fearless sleuth in a whole heap o’ trouble.

Can Mabel collar the killer before she’s singing country-western with choirs of angels?

Murder on Honky-Tonk Row is the second book in the lighthearted Ghost & the Camper kooky mystery series. If you like wacky characters, quick-witted banter, and crooners with a twang, then you’ll love Rita Moreau’s clever caper.

Character Guest Post: Get to know Irma in this excerpt

“This isn’t a coincidence. I’ve been dead a long time, and you are the first person who has been able to see me and talk to me. There has to be a reason.”

I thought about this, “When I was a kid, I could see dead people, but when I got older, that went away.”

“Sometimes, small children do have that ability, Mabel. I stay away from them. Don’t want to scare them or worse, become their imaginary friends. Too much work. I’m not a nanny.”

“You mean who was I? The name’s Irma and I was a hooker in Las Vegas. First, I was a showgirl and then got into hooking, as we girls called it back then. You sort of fell into it by happenstance, and then you were hooked, hence the name hooker.”

She looked at me with emerald green eyes that looked all the way back to a prior life.

“Anyway, I was real young when I got pregnant. I discovered it when I was in jail on trumped-up charges. I called my sister, Betsy, and we agreed that it’d be best if she took the baby. So, she and her husband adopted him. They already had a houseful of kids. One more was no big deal. I was able to watch him grow up from afar. We never met. After all, I was a hooker, and eventually, I became a madame of my own cat house. Well, mine and the mob’s. They don’t let you alone. I did business with them just like your ex.”

“I know everything about the owners of my camper. You buy the camper and along comes your baggage.”

I watched as Irma got up and slid across the terrazzo floor. She stood there, staring at the ocean. I was getting pretty close to calling Meg and was just about to dial her when Irma turned around and floated right in front of me with her hands on her hips.

“I wouldn’t do that, Mabel. They’ll put you in the old farts’ home. Trust me on that.” She stuck her pointer finger really close to my nose.

“Please tell me you cannot read my mind or worse, you can see the future?”

Looking at the ghostly finger right under my nose, it looked as real as mine. The more she talked, the more human she looked, but I knew she was a ghost because she was dressed like I used to in the 1980s and with that really big hair.

“No, I can’t see the future or read your mind, thank the big guy up there.”

She pointed upwards as she sat back down in my chair. I took another sip of my drink, and I leaned closer to her.

“Look, Irma, why don’t you cut to the chase before I fall asleep in this chair. What are you doing here? What is this, Beetlejuice?”

“Well, I’m stuck in purgatory. My last deed on earth got me into purgatory. It could have been worse. You see, I took a bullet for my son.”

Irma placed her hand gingerly on the front of her large chest, near her heart.

“Geez, that sucker did hurt.”

“Yeah, something like that. My son’s name is Walt. He became a detective. One of my girls overheard some made men planning a hit on him. I had put out the word that if they ever heard anything about Walt, they were to come to me. They didn’t know he was my kid. For that matter, Walt didn’t even know. I kept an eye out for him.”

“So, you never got to see him growing up.”

“I watched him from afar. I told my sister it would be for the best. So, in a way I did see him grow up and like I said I kept an eye out for him. I grabbed my white mink and stuffed my Glock into my pocket and rushed over to the campground where Walt was living.”

“I waited outside and when the guy showed up—his name was Luca—I watched as he broke in. I snuck up to the window. I could see him holding a gun on Walt. I knew he was going to kill him. I held my gun up to the window, and that was when Walt saw me. He was standing at the back of the camper, and Luca was standing by the dinette and had him blocked. Walt didn’t flinch, but Luca must have caught something in his eyes because he turned around and saw me standing at the window with my gun pointed right at him. I got off a shot. Unfortunately, so did he.”

“Next thing I know I’m on the ground. Then Walt was kneeling down and holding me in his arms. Only when I saw him look at his hand did I realize I was bleeding. I grabbed on to his finger and held tight. I remembered the night he was born. They let me hold him for a just minute. He grabbed my finger. It was so tiny but strong. He wiped away a tear rolling down my cheek. Of course, he didn’t know who I was. But for a moment he was looking at me like he recognized something.”

“Did he say anything?”

“He kept saying, ‘Ma’am, I called for back-up. You hold on now. You saved my life and I want to thank you properly. You hear me, ma’am. Hold on.”

“I did hold on very tight to his finger. Then when I felt the last ounce of life leaving me, I said, ‘Mom. Call me Mom.”

I got up to get a cocktail napkin to blow my nose and wipe away a tear.

“So, to make a long story short, I haunt this camper. Walt moved out the day after I died and the day he found out I was his mother. Betsy sat down with him and told him. He came to my funeral with the first of my future daughters-in-law.”

She brushed what looked like a tear rolling down her cheek.

“You know what he said when he came up to my coffin? ‘Mom, I wish I’d had a chance to get to know you.’ It touched my heart.”

Reflecting on her life, I saw the ghostly tear evaporate. I guess we had bonded as mothers who have held a tiny finger do. 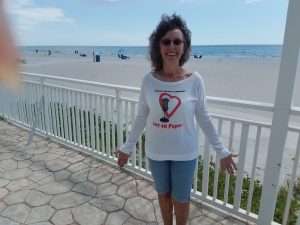 A workaholic by nature, upon retirement, Rita Moreau began work on her bucket list, writing a book. Traveling the national parks with her husband George in a vintage Bluebird motor home, (on George’s list), Rita completed her first novel Bribing Saint Anthony. Back home she completed Nuns! Psychics! & Gypsies! OH! NO, Feisty Nuns and The Russian & Aunt Sophia and The House on Xenia. Last year when we entered the Twilight Zone Rita wrote the first two new novels in the Ghost & the Camper series. Rita and her husband live in a postcard called Florida where he has fun telling everyone he is the author’s husband. When not writing she joins PatZi Gil on the Joy on Paper radio program with Book Buzz Mysteries, or you can find her teaching SilverSneakers fitness classes and doing her best to keep busy. She loves connecting with readers. Connect with her below.

Books to the Ceiling – REVIEW