You are here: Home / Books / The Glitter End: Stationary Shop Mysteries, #3 by Vivian Conroy | Book Review
Thanks for sharing!

The third book in the Stationery Shop Mystery Series from Vivian Conroy is here! Murder is on display in this small-town cozy mystery, The Glitter End. 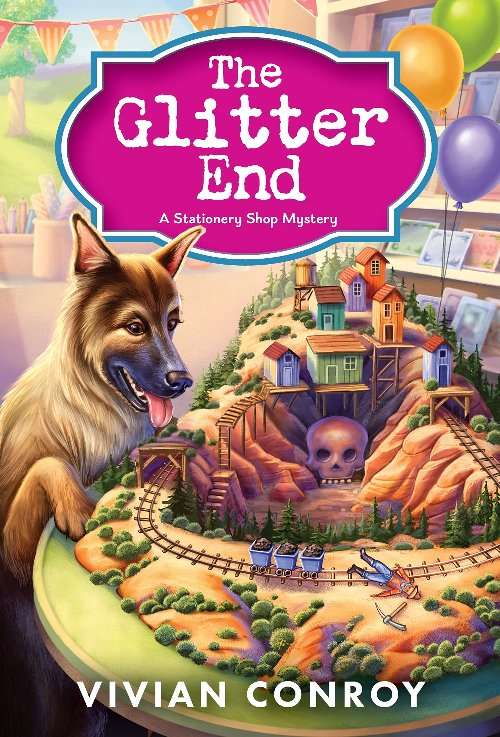 Stationery shop owner Delta Douglas is finally settling into small-town life in Tundish, Montana. But with the tourist season drying up, she must find a way to draw in her stationery shop clientele. Well-known artist Tilly Tay is just the ticket―and her new miniature gold mining display is sure to be a hit attraction in town.

But on the day of the grand reveal, Delta discovers a tiny prospector dead in the exhibit. That’s when a body is found at the nearby motel, perfectly mirroring the miniature murder. Soon enough, Delta’s artist guest is suspected of the crime and her shop is suddenly cast under a cloud of bad press. With her faithful Paper Posse at her side, Delta must pull no paper punches to crack the case and save Wanted’s reputation before more trouble comes into the fold.

· “The determined heroine and her pals solve two mysteries and still have time for romance.”
—Kirkus Reviews

· “The characters, the town and the story come to life.” —Nicole, Goodreads

The third book in the Stationary Shop Mystery trilogy from Vivian Conroy is here with The Glitter End. This one is a 3.5 star book for me, rounded up to a 4 for Mrs. Cassidy, my favorite member of The Paper Posse. It seems that I am in agreement with many other reviewers when I say, this series just doesn’t hold a punch. I had reviewed Last Pen Standing and enjoyed it. There were many characters to get to know, and I was hoping to get to know them in depth throughout the series. I still feel that we’re only getting a glimpse of them.

Mrs. Cassidy seems to be the author’s favorite of The Paper Posse as well since she’s the one who is most involved in this mystery. Tilly Tay, the artist displaying her miniature gold mine at WANTED, has a quirky personality that fit in well for a cozy mystery, though I would have liked her to have a little more depth too. Her odd behavior and relationship to the victim make her a fine prime suspect for the force in Tundish, but the posse just doesn’t believe it’s that simple.

This is a series that I really wanted to love because the town, which houses shops in the original gold mining town buildings, makes a wonderful setting for a cozy mystery series. And though the mysteries are intriguing, they feel rushed in the end.

I think this series would appeal to those who enjoy paper crafts and an old west setting. The Glitter End may be the final book in the series though I’m not quite sure. This is one of those cozy mystery series that could have used fewer characters in the beginning, so that we could form attachments with them. I’d love to see this same premise used again but with stronger bonds between fewer characters.

Thanks for sharing!
« Where To Enjoy Spectacular Fall Colors in the USA
Buying For Baby? Here Are The Essentials You Need »