You are here: Home / Books / One of Us: A Tower District Mystery by Lorie Lewis Ham | Character Guest Post
Thanks for sharing!

Welcome to my stop on the Great Escapes Virtual Book Tour for One of Us: A Tower District Mystery by Lorie Lewis Ham. Stop by each blog on the tour for interviews, guest posts, spotlights, reviews and more!

One of Us: A Tower District Mystery 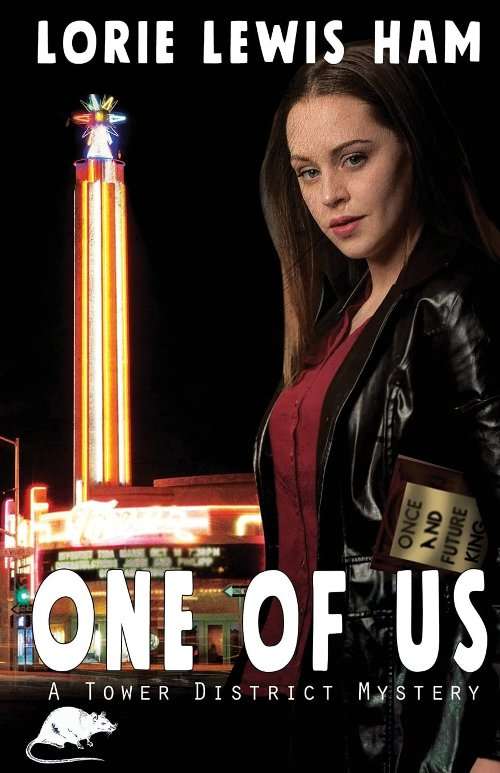 At 35, children’s book author Roxi Carlucci finds herself starting over again after her publisher drops her book series. With no income, she has to pack up her life on the California Coast, along with her pet rat Merlin, and move in with her cousin, P.I. Stephen Carlucci, who lives in Fresno, CA. The one redeeming factor is that Stephen lives in the Tower District—the cultural oasis of Fresno.

Stephen talks Roxi into helping out with a community theatre production, which is also a fundraiser for a local animal rescue. Little did she know that someone would be murdered during a rehearsal, and that she and Stephen would be hired to find the killer. The killer has to be one of Roxi’s new acquaintances since the theatre was locked at the time of the murder, but no one seems to have a motive. How can they solve a murder without a motive? Could the local gossip website hold any clues? Can they stop the killer before they strike again?

Starting over sucks! My name is Roxi Carlucci, and recently my perfect life pretty much imploded. I used to be a writer, which is why I was asked to write this guest post. But since I can’t write about my books anymore, I decided to write about starting over. I don’t know if you will find this interesting or not, but right now, this is my life.

I spent several years writing a children’s book series featuring a pet hamster named Valentino, and then later, a pet rat named Merlin. Then all of a sudden, a few months ago, my publisher decided to drop the series. I was devastated and at a total loss as to what to do next. As if that wasn’t enough, my longtime roommate Lindsey announced that she was getting married and moving out. That left me with no income and no one to split the bills with me.

At the time, I lived in a small coastal town called Ayr, not very far from Santa Cruz, California. My options were few, and I honestly had no clue what I was going to do. I have a degree in journalism, but that profession is slowly disappearing. I have a degree in criminology, but I had no desire to go back to being a cop. I spent a year as a cop when I was younger, and it just wasn’t for me. As luck would have it, as I sat on the couch weighing my options, my cousin Stephen called. He said I should move in with him until I could figure out what to do. The idea of moving to Fresno, California, had no appeal whatsoever. But the idea of not having to pay rent had a great appeal. Hey, it would just be temporary, right?

So I closed down my pocket pet animal rescue, found someone to rent the house, packed up my belongings and my pet rat Merlin, and moved to Fresno. Of course, it was the middle of the summer, so it was hot as hell. Thankfully, my cousin lives in the Tower District, which is the cultural oasis of Fresno—so at least there was that. Theatre, art, music, coffee shops, a bookstore, and great food, are all within walking distance, so maybe I’ll survive.

While this move gives me time to figure out what I’m going to do next, I have no clue where to start. I suppose I could pick up a copy of the latest What Color is my Parachute? and start making lists. There are all the job websites that didn’t exist last time I needed a job. If I had a car, I could consider driving for Uber, or one of those food delivery apps, but sadly, all I have is my old red bicycle. I could go back to college and get yet another degree…Fresno City College was within walking distance.

There was one other option I hadn’t really considered—I could work for my cousin. Stephen is a private investigator and I had worked for him a few years ago, but would he even need my help? How much work was there for a private detective in Fresno? I had no

interest in divorce cases, and surely, there weren’t that many murders happening around here.

Oh well, I could think about that later. Stephen talked me into helping out with a local community theatre production, to give me something to do while I was figuring out what to do. At least I wouldn’t be bored—though how exciting could community theatre really be?

Lorie Lewis Ham lives in Reedley, California and has been writing ever since she was a child—her first stories were about her stuffed animals. Her first song and poem were published when she was 13, and she has gone on to publish many articles, short stories, and poems throughout the years, as well as write for a local newspaper. Four out of 5 of her previously published mystery novels feature gospel singer Alexandra Walters and are set in the San Joaquin Valley. Those books were inspired by the many years she spent traveling and singing gospel music with her family.

One Of Us is the first in a brand new mystery series set in the Tower District of Fresno, California featuring podcaster and part-time detective Roxi Carlucci.

Lorie has also been the publisher of the online magazine Kings River Life for the past 11 years (kingsriverlife.com), and of its sister website KRL News & Reviews (krlnews.com). She also launched a mystery podcast called Mysteryrat’s Maze (mysteryratsmaze.podbean.com) 3 years ago which features mystery short stories and first chapters read by local actors, including the first chapter of this book. You can find the podcast on Apple Podcasts, and all of the other usual places.

Lorie has been married to Larry for 30 years and they have 2 grown children—Jayce and Joseph Ham. She currently has 5 cats (Merlin, Sam, Dean, Sidney, and Willow), 4 dogs (Lestat, Huey, Xander, and Phoebe), and a pet dwarf rabbit (Sherlock). For many years, she worked in pet rat rescue and has had many pet rats of her own over the years.


One of Us: A Tower District Mystery Tour Participants