You are here: Home / Books / Mystery of the Eight Islands (Trouble in Paradise) by Terry Ambrose | Guest Post
Thanks for sharing!

Welcome to my stop on the Great Escapes Virtual Book Tour for Mystery of the Eight Islands (Trouble in Paradise) by Terry Ambrose. Stop by each blog on the tour for interviews, guest posts, spotlights, reviews and more!

If you love senior sleuths in cozy mysteries, you’re going to love McKenna and his pal Chance Logan.

Mystery of the Eight Islands (Trouble in Paradise)

Apartment manager and amateur sleuth McKenna wants a break from solving murders. Too bad his best friend, wannabe PI Chance Logan, doesn’t feel the same. Chance has found a case he thinks McKenna’s going to love—the death of prominent attorney Julian Carr, and the theft of a 125-year-old necklace that’s worth a quarter of a million dollars. Before long, McKenna’s feeling pressured from all sides—find the necklace, solve the murder. Sure. Why not just add save the world?

McKenna’s sure something fishy is going on when he and Chance meet with Julian’s granddaughter about the case. She’s created her own murder board with five suspects. The list includes an unstable, art-collecting veterinarian, a convicted felon, a disbarred attorney, a suspected art thief, and Julian’s new business partner.

As the investigation ramps up, McKenna and Chance see their leads drying out faster than laundry in the tropical sun. The really bad news is they’re not sure they can even find the Eight Islands or solve the murder. For once, McKenna’s worried they just might fail.

Tired of the same old cozy mystery fare? Then cozy up with male amateur detective McKenna and his PI wannabe pal Chance Logan in this Hawaii murder mystery. When it comes to senior sleuths in cozy mysteries, McKenna’s as sharp as they come, but with a fun dose of snarky attitude thrown in. Enjoy the ambience of Hawaii while you’re savoring a little murder in paradise.

When we booked a tour of Honolulu’s ‘Iolani Palace in 2017, I had no idea it was going to lead to another Trouble in Paradise Mystery. But as our docent walked us through the only royal palace in the United States and relayed the history of the palace and Hawaii’s monarchy, I had an urge to somehow tell that story.

What is ‘Iolani Palace? 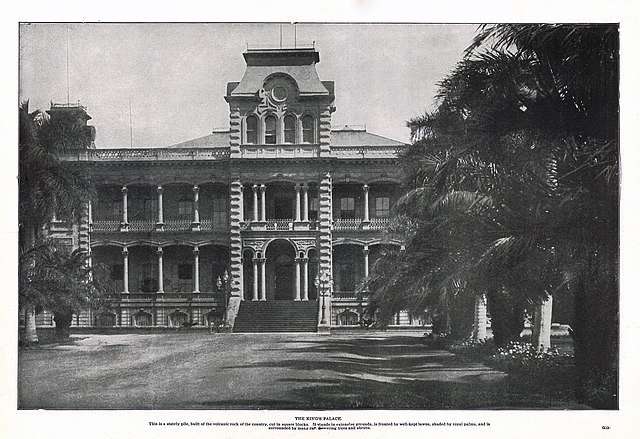 The palace sits on land that may have been a heiau at one time. In Hawaii, a heiau is a place of worship. The architectural style is called American Florentine, which blends features from the Italian Renaissance with features unique to Hawaii. 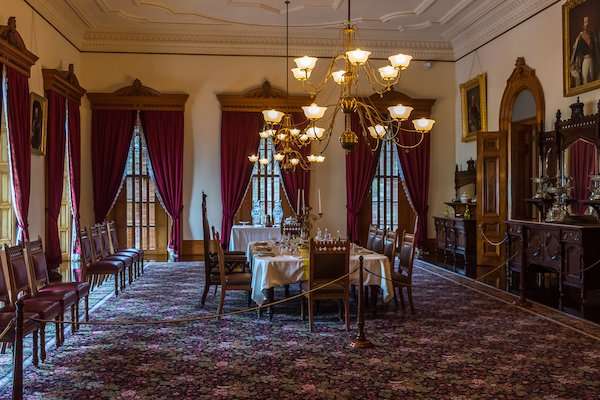 King Kalākaua insisted the palace have all the latest technological features, so things like indoor plumbing, electric lighting, and a telephone found their way into the design. 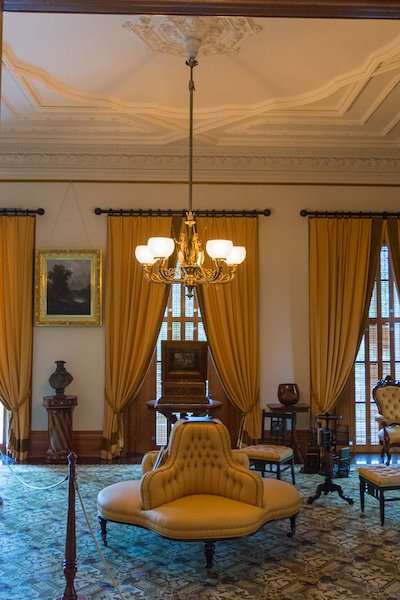 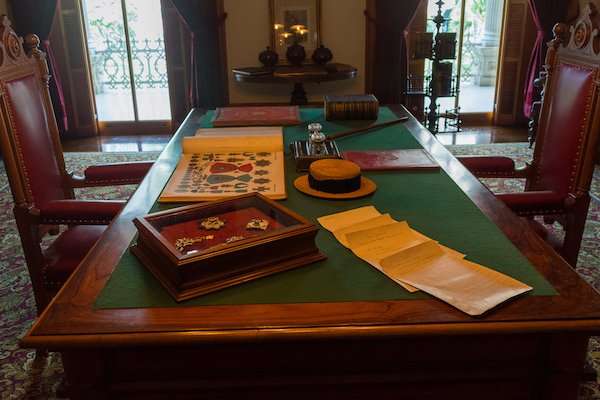 The photo of the king’s office includes letters to and from President Grover Cleveland on the desk. We were told this is the room where the king spent a great deal of time. I noticed a lot of chairs in one of the photos on the official palace website, which led me to wonder how many visitors the king might have had. 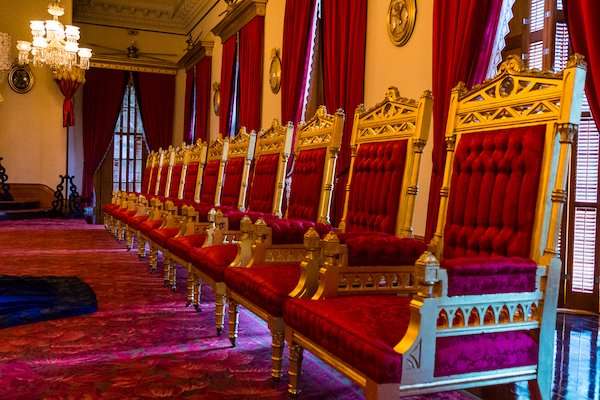 During our tour of ‘‘Iolani Palace, we went into this room where chairs were lined up and ready for dignitaries. 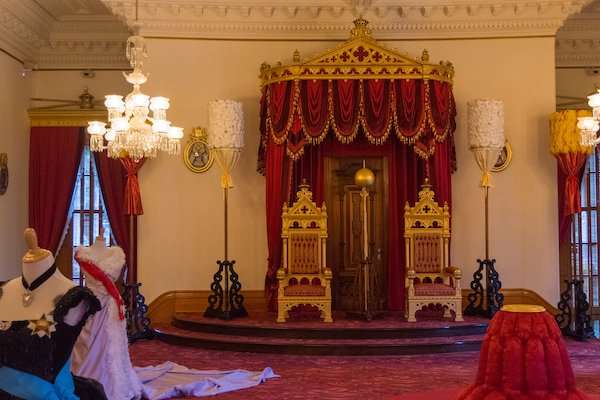 The Throne Room is the largest room in the palace. Prior to the overthrow of the monarchy, it was the site of many royal gatherings. After convicted of participating in an attempt to restore the monarchy (charges which she denied). 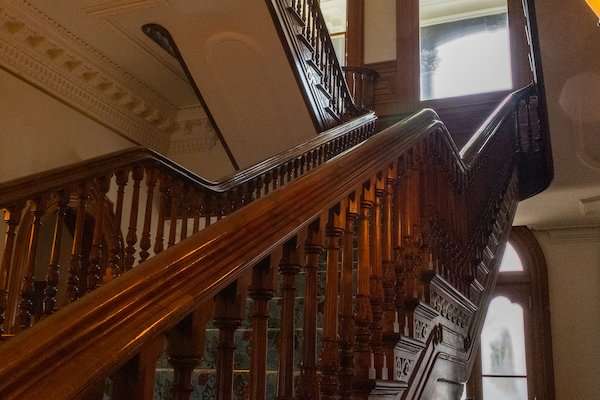 From the door moldings to the staircases, all of the woodwork throughout the palace is a reminder that this was a royal residence. I was in awe of the rich wood staircases. It seems as though every part was intricately carved to perfection. 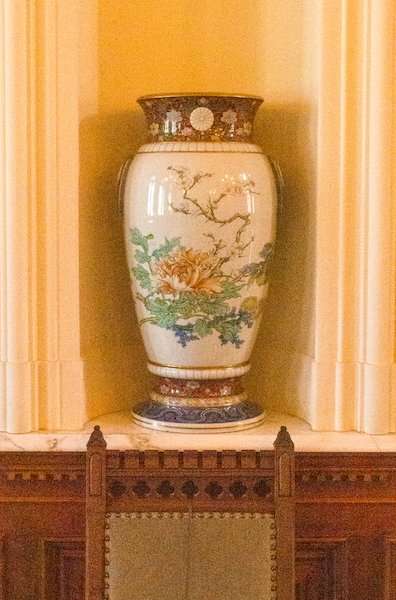 Mystery of the Eight Islands

I hope you enjoyed this virtual tour of ‘Iolani Palace. It’s featured in Mystery of the Eight Islands when my protagonist, McKenna, gets to take one of the palace’s white-glove tours. Did you notice those crimson drapes behind the chairs in the Throne Room? So did McKenna, and that turned out to be the clue he needed to eventually solve the murder in his latest adventure. 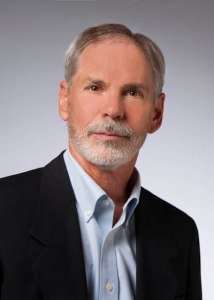 Once upon a time, in a life he’d rather forget, Terry Ambrose tracked down deadbeats for a living. He also hired big guys with tow trucks to steal cars—but only when negotiations failed. Those years of chasing deadbeats taught him many valuable life lessons such as—always keep your car in the garage.

Terry has written eighteen books, several of which have been award finalists. In 2014, his thriller, “Con Game,” won the San Diego Book Awards for Best Action-Thriller. His series include the Trouble in Paradise McKenna Mysteries, the Seaside Cove Bed & Breakfast Mysteries, and the License to Lie thriller series.
You can learn more about Terry and his writing at terryambrose.com.