Welcome to my stop on the Great Escapes Virtual Book Tour for Ice Cold Murder (Charlie Kingsley Mysteries) by Michele Pariza Wacek. Stop by each blog on the tour for interviews, guest posts, spotlights, reviews and more! 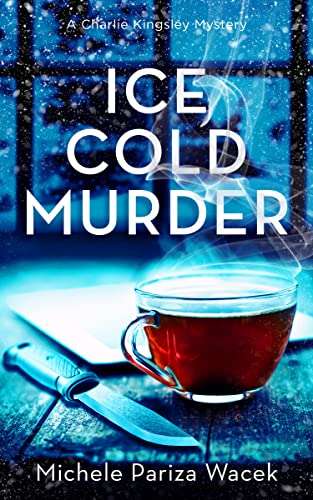 When Charlie agrees to accompany her friend Claire to her late grandmother’s reading of the will, she assumes she is simply there for moral support.

She doesn’t expect things to get so … strange. It’s odd enough that it takes place over a weekend, but that’s just the beginning … They also need to stay in Claire’s grandma’s supposedly haunted house with Claire’s estranged family.

Things get even worse when a huge storm snows them in. No electricity, no phone, and no way out.

Throw a dead body into the mix, and there’s no question it’s now the world’s worst family gathering. Ever.

At least Charlie brought lots of tea, which she’s going to need as she races to solve this closed-circle mystery before her friend’s dysfunctional family get-together results in anyone else being murdered.

Meet Charlie. Better known as “Aunt Charlie” from the award-winning Secrets of Redemption series. She’s back, making teas and solving cases in this funny, twisty, cozy mystery series set in the 1990s in Redemption, Wisconsin.

Guest Post: The Story Behind the Story: Ice Cold Murder

When the concept for The Murder Before Christmas dropped into my head, it didn’t come alone. It brought more ideas with it, including Ice Cold Murder and A Grave Error, which is a novella prequel.

So, from the beginning, it was clear this was supposed to be a series.

That doesn’t mean I didn’t resist it at first. I was in the middle of writing my second standalone, and had a few more ideas for more waiting in the wings. (My standalones ARE loosely connected, as they take place around Redemption, Wisconsin, which is the main world I write in, so it’s not like I’m writing completely unrelated books.)

I was never one to think in terms of series. When I started writing It Began With a Lie, the first book in my Secrets of Redemption series (which is the series that The Charlie Kingsley Mysteries spun off from), I was convinced that It Began With a Lie was going to be one book.

About six months in, I was despairing. It was SUCH a complicated storyline, which made me worry not only about the book ending up huge, but that it would also take me forever to write.

But then, I got the hit that it was actually two books, and so began the painstaking process of splitting the book into two.

From there, I figured if I was going to write two books, I might as well write three and have a trilogy. And then Charlie stepped in, and I ended up writing her story, which turned into Books 4 and 5.

You get the idea.

So, having a series show up rather than my normal standalone book idea was a different experience for me. And it was a little stressful … as in, what if I commit to multiple books and the series flops?

Well, Charlie isn’t taking “no” for an answer, so here we are with Ice Cold Murder. Murder Next Door, which is Book 3, is on its way to an April release.

I loved writing Ice Cold Murder. I always wanted to write a mystery where all the suspects were trapped in a house while a winter storm raged outside. I especially like REALLY cold settings for these kinds of mysteries, like in the Artic or Antarctic. (The Thing, anyone?) Although when I read those, I like to be curled up on the couch, covered with several blankets and a hot cup of tea in my hand.

Anyway, Ice Cold Murder isn’t nearly as cold as either of those places, nor is there any sci-fi alien monster running around. It’s a twisty cozy mystery that takes place in the 1990s.

I also always loved the closed–circle or small–group–of–suspects trope, which was perfect for this trapped-in-a-house-in-a-snowstorm mystery.

And, lastly, family secrets are a regular theme in my work. I always love the idea of secrets hidden in the past that impact what’s going on in the present.

Want to know more? Check out Ice Cold Murder and see what you think.

I really enjoyed Ice Cold Murder! Though I’ve never read the Secrets of Redemption Series, in which Charlie appears, I had no trouble with jumping right into the story. In Ice Cold Murder, Charlie joins her friend Claire to Claire’s grandmother’s house. Claire’s grandmother has died, and the will stipulates that the family gather together in the house one last weekend. This is an unusual request given that the family haven’t spent time together in the house for many years. Charlie only agrees to go because she’s worried about Claire who hasn’t looked well in a while.

Charlie is such a great character. I love that she runs a tea shop where she makes her own blends. She also can give you the tea you need when you tell her how you’re feeling. Of course, some people spread rumors that she’s a witch since she can concoct the perfect blend for you. And she lives in a “haunted” house. What is this? Salem, Massachusetts? I thought that was so funny. I’d totally be shopping at her place a lot! I always need a concoction!

Since this is set in the 1990s, there are some references that those of us who are old enough to remember the 90s will appreciate. I also loved the fact that Claire’s grandmother’s house was “modernized” probably in the 1960s or 1970s. We know what that style was! Go watch The Brady Bunch reruns if you don’t!

When the murder occurs, and the power goes out, things really get going. This murder mystery’s plot flows smoothly, and if you really follow the clues, you may just solve the mystery. I can honestly say that I only sort of suspected the character, so the reveal was exciting.

Ice Cold Murder is an exciting, charming cozy mystery with wonderful characters and a thrilling mystery. I definitely recommend it! 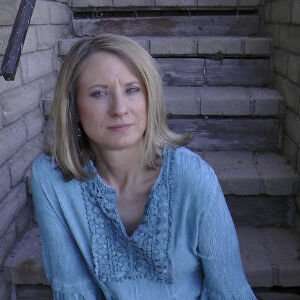 When Michele was 3 years old, she taught herself to read because she wanted to write stories so badly. It took some time (and some detours) but she does spend much of her time writing stories now. Mystery stories to be exact, ranging from psychological thrillers to cozies, with a dash of romance and supernatural thrown into the mix. If that wasn’t enough, she also hosts a virtual book club you can check out and join (for free!) at MPWNovels.com.

Michele holds a double major in English and Communications from the University of Wisconsin-Madison. Currently, she lives in the mountains of Prescott, Arizona with her husband Paul and southern squirrel hunter Cassie.

I Read What You Write – AUTHOR INTERVIEW

Cozy Up With Kathy – AUTHOR  INTERVIEW

Thanks for sharing!
« Out of Temper (Bean to Bar Mysteries) by Amber Royer | Guest Post
What Happened on Box Hill: Austen University Mysteries by Elizabeth Gilliland | Guest Post »