Welcome to my stop on the Great Escapes Virtual Book Tour for Front Page Murder (A Homefront News Mystery) by Joyce St. Anthony. Stop by each blog on the tour for interviews, guest posts, spotlights, reviews and more!

In this World War II-era historical mystery series debut by Joyce St. Anthony, small-town editor Irene Ingram has a nose for news and an eye for clues. 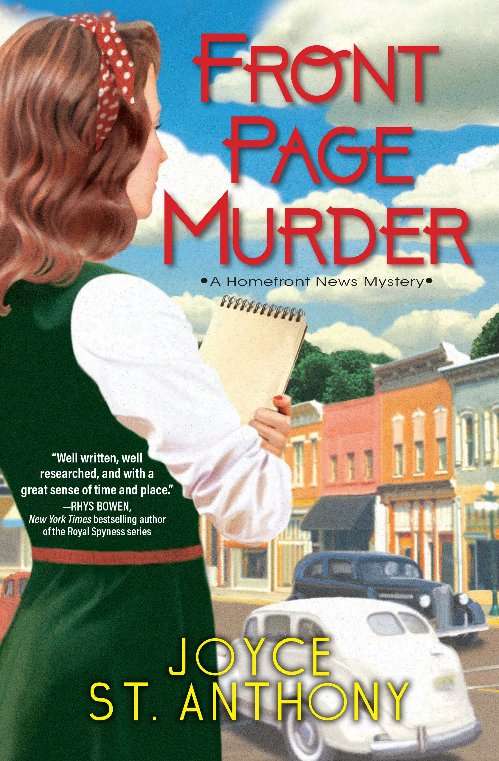 Irene Ingram has written for her father’s newspaper, the Progress Herald, ever since she could grasp a pencil. Now she’s editor in chief, which doesn’t sit well with the men in the newsroom. But proving her journalistic bona fides is the least of Irene’s worries when crime reporter Moe Bauer, on the heels of a hot tip, turns up dead at the foot of his cellar stairs.

An accident? That’s what Police Chief Walt Turner thinks, and Irene is inclined to agree until she finds the note Moe discreetly left on her desk. He was on to a big story, he wrote. The robbery she’d assigned him to cover at Markowicz Hardware turned out to be something far more devious. A Jewish store owner in a small, provincial town, Sam Markowicz received a terrifying message from a stranger. Moe suspected that Sam is being threatened not only for who he is…but for what he knows.

Tenacious Irene senses there’s more to the Markowicz story, which she is all but certain led to Moe’s murder. When she’s not filling up column inches with the usual small-town fare—locals in uniform, victory gardens, and scrap drives—she and her best friend, scrappy secretary Peggy Reardon, search for clues. If they can find the killer, it’ll be a scoop to stop the presses. But if they can’t, Irene and Peggy may face an all-too-literal deadline.

I absolutely loved Front Page Murder! From the moment I picked it up, it just gave me that good feeling you get when you know a book is going to be good. It made me feel like I was reading Nancy Drew or Cherry Ames, and believe me, I would still be reading those now if I had the time. It’s hard to describe the feeling, but if you’ve had it, you know what I mean. Front Page Murder just made me happy!

The first thing it’s got going for it is the time period. Now, I read a lot of books set during WWII, but almost all of those are set in Europe. The only ones I’ve read that I can think of that are set in the US are the Molly American Girl books which I read with my daughter Molly when she was little. So, Front Page Murder really gave me a different perspective of the time period. Obviously, if you went to school (at least back when I went), you had American history, so you know the facts. Front Page Murder helped give me the “feel” not just the facts.

Then there are the characters. Irene is a very strong female protagonist. She’s editor in chief of the newspaper since her father, the former editor in chief, is a foreign correspondent in the war. The guys have a hard time accepting her as their boss, but she shows them that not only is she good at what she does, she also won’t put up with any disrespect. Her friend Peggy answers the phones, gets the advertising, and more at the paper, so she and Irene have plenty of time to talk about the mystery. There are many characters, and they’re all very well developed. I’d tell you about all of them, but you need to read Front Page Murder yourself to discover them and this wonderful mystery!

One thing I found amusing was the fact that Irene’s mom just assumed that all of the women taking on the men’s jobs, since the men are in the service, would willingly give up the jobs and go back to being a housewife or whatever they did before the war. The factory featured in Front Page Murder pays very well, and some of those women aren’t about to leave willingly. It was certainly the mindset of the time that women should be in the home.

The mystery in Front Page Murder is well-plotted. We’re given just enough clues to discover the culprit(s?). Though I want to say something about the mystery, I can’t because it will give something away! You’re going to have to read it to see what happens in the mystery.

Front Page Murder is the first book in the Homefront News Mystery Series, so it’s the perfect choice for those of you who like starting at the very beginning. Front Page Murder has wonderful characters, a bewildering mystery, and lots of cozy elements. It really did make me feel happy! I hope it does the same for you! 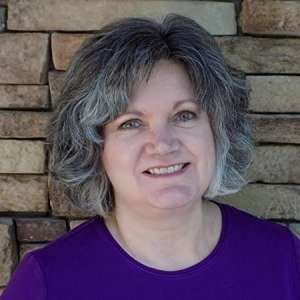 Joyce was a police secretary for ten years and more than once envisioned the demise of certain co-workers, but settled on writing as a way to keep herself out of jail. As Joyce St. Anthony, she is the author of the Homefront News Mysteries. The first in the series, Front Page Murder, will be (or was, depending on the blog date) released on March 8, 2022. Under her own name–Joyce Tremel–she wrote the award winning Brewing Trouble cozy mystery series. She is a native Pittsburgher and lives in the beautiful Laurel Highlands of Pennsylvania with her husband and two cats–Hops and Lager.

March 11 – View from the Birdhouse – REVIEW

March 12 – Reading Is My SuperPower – REVIEW

March 15 – Here’s How It Happened – SPOTLIGHT

March 16 – Escape With Dollycas Into A Good Book – REVIEW

March 18 – I Read What You Write – CHARACTER GUEST POST