200 years ago, the Brothers Grimm changed everything.

With the help of a little magic, fairy tales were made real, manifesting all over the world. Charming princes. Gold-hunting dwarfs. Terrible step-mothers. Heroic animals.

Then, slowly, they began to change. Everyone—from Prince Charming to the old miller—grew more evil. Corrupted. A hero was chosen to stop them, hunting them down one by one and destroying them with the help of a magic pen and a special rabbit assistant. 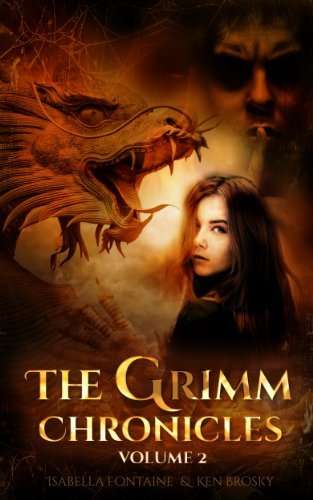 For 200 years, the hero’s magic pen has been passed on from generation to generation. The newest hero is Alice Goodenough, an 18-year-old junior from Washington High School. While her friends spent their summer working and having fun, Alice found herself doing battle with creatures most human beings don’t even realize exist. A giant snake. A blood-sucking prince. A terrifying half-man, half-hedgehog. Dastardly dwarfs intent on mind-controlling everyone who uses a cell phone.

Now, senior year has begun. With it comes a new challenge at school, where bullies have grown bolder and classes more challenging. As if that’s not enough, Alice must face off against a collection of Corrupted who all share a terrible secret, one that might awaken a creature capable of doing untold damage. To uncover the secret, Alice will have to face off against a man-eating lizard, a bloodthirsty sea captain, and a mysterious wizard who can see into the future …

I love this book! Seriously insanely love it. It is even better than Volume 1, if that is possible. It is so cute, so fun, so exciting, so funny, so everything good about a book. Alice and Briar Rabbit are back for more Corrupted fighting. There is more action and more backstory as well.

Let me just say, that the characters in this book are so endearing, that I just want to have them over for pizza.  They are so real. My daughter is Alice’s age, and I feel like they would be friends. Alice is such a great hero(ine).  She wields that magic pen like she’s been the hero for years rather than months. She takes down Corrupted like it’s second nature to her. If you haven’t read Volume 1, the Corrupted are Grimm’s Fairy Tale creatures who are living in our world. The longer they live, the more corrupted they become. And it’s Alice’s job as the hero to destroy them. And Briar is B’rer Rabbit. Trust me, it will make sense when you read it.

I love the secondary characters in this book. They feel more like main characters now.  I love Seth. He is the ultimate best guy friend a girl could ask for. He is hilarious. And the inclusion of Chase is amazing. Their little group of 4 could not be better. Rachel and Clyde are excellent secondary characters as well. I am hoping they become more involved in the next volume. And I seriously hope Trish comes to her senses!

My favorite scene has got to be where Seth and Briar are trying to sing “Dancing Queen” by Abba. “Seen that girl,” he (Seth) sang out of tune, “watch her scream, kicking the dancing queen.” Briar waited for the next chorus. “I do believe they’re saying Sea that curls, within seas, tickle the dancing queen.” I was totally cracking up! So not only do you get kick-butt action, you also get serious comic relief in this book.

Trust me when I say, you need to buy all of The Grimm Chronicles.  You don’t know what you are missing!

You can purchase Volume 2 or each story individually below. These books are also free on Kindle Unlimited!

Ken Brosky received his MFA in fiction writing from the University of Nebraska-Omaha. He also teaches English at Madison College. This is his first Young Adult series.

Isabella Fontaine owns a farm in Wisconsin and enjoys reading weird books like House of Leaves. This is her first Young Adult series.