You are here: Home / Books / Book Reviews / The Silver Strand by L. J. Clarkson Book Review
Thanks for sharing! 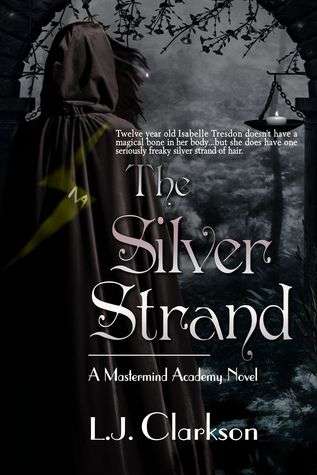 Ever since twelve year old Isabelle Tresdon’s silver strand of hair sprouted, it’s been nothing but trouble: bleeding pink dust and sparking like a firecracker. Refusing to be known as the girl with the freaky, grandma hair, she wishes it never grew and the hair withers and tarnishes. The only problem is, the strand is Isabelle’s source of magic, and she can transform particles of energy into matter. It’s also her ticket into Mastermind Academy, a secret school inside the earth’s core.

Five days remain before the strand drains her magic and life, forcing Isabelle to enter into a deal with two trickster Masterminds to save it. But what she doesn’t count on is there is more at stake than just her life.

The Silver Strand, a MG Fantasy Adventure for 9-12 year olds, is book 1 in the Mastermind Academy Series.

The Silver Strand is a very cute Middle Grade book. It is full of adventure, excitement, and magic…the stuff tweens love! The story starts out with an ordinary girl in an ordinary school doing ordinary things. But the not so ordinary happens when her hair starts bleeding pink dust! From that point on, Isabelle’s life is completely changed!

The characters in The Silver Strand are wonderful. Boldrick has to be my favorite because he’s a cat 🙂 And we all know how I feel about cats! He’s not a cuddly kind of cat though. He’s more like the cat in Sabrina, the Teenage Witch! Then there is Esme who is full of spunk and spirit. And, of course, Isabelle! Since she has just found out about her magical powers, you can’t blame her for being a little creeped out by her circumstances. But she does just wonderfully.

The scenes are nicely described and the adventure is the type a middle-grader would really enjoy. And what would a fantasy be without a dragon? You’ll love this dragon! He’s not at all what you’d expect 🙂 The plot moves pretty quickly and is at a pace MG readers can follow without being overwhelmed.

I recommend this book for anyone in the 8-12 age range who loves magic and fantasy.

One thing you need to know about LJ Clarkson is that she tells BIG lies. She tells everyone that she gave up her career as an Environmental Engineer and Project Manager to write full time.

But that’s not entirely true. Ten percent of the time she sleeps in. Fifteen percent of her day, she spends surfing the internet, researching for new books and her business. Ok, fine. Two percent is for research. But she’s only admitting it so she doesn’t end up like Boldrick. For eighteen point seven five percent of her day, she runs her promotional and support site for authors, called Indicated (www.indicated.com.au). The rest of her time involves writing, reading, watching movies and TV, walking her dogs and falling asleep whenever her boyfriend talks technical computer lingo.

Truthfully, she hates early mornings, Mondays, grammar (yuck! just ask her poor editor!), broccoli and cleaning. If you would like to drop her and line and let her know what you think of the book, she would love to hear from you. Just not before 8:30am in the morning.