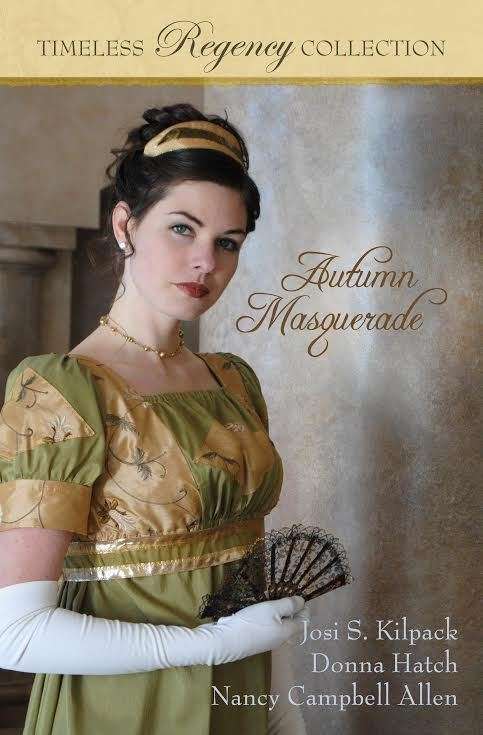 From the publisher of the #1 Amazon bestselling A Timeless Romance Anthology series in Clean Romance.

A MERRY DANCE by Josi S. Kilpack. When Lila overhears her uncle talking about a man coming to look for property in the county, she doesn’t think twice, until her uncle says he hopes Lila will find enough interest to marry the man. How can she marry someone named Mortimer Luthford, not to mention that his advanced age of thirty-three, and especially since she’s already in love with her absent cousin Neville? But when Mortimer arrives, Lila has to try every trick known to women to act not interested in the rather fascinating man, which proves a very difficult façade to maintain.

UNMASKING THE DUKE by Donna Hatch. The last thing Hannah Palmer wants to do is flirt with men in a crowded ballroom, but when her sister throws a Masquerade Ball, Hannah can’t say no to the invitation and takes comfort behind a mask. She dances with a charming masked man, matching him wit for wit. When the glorious evening culminates in a kiss, and the two remove their masks, Hannah is horrified to discover the man she’s been flirting with all night is her most despised neighbor, the Duke of Suttenberg. No matter how charming the duke was at the ball, and how wonderful the kiss, he is the last man she’d ever accept.

WHAT’S IN A NAME by Nancy Campbell Allen. Penelope Timely has a terrible secret. She’s been writing letters to the Duke of Wilmington, pretending to be her ever-proper twin sister, Persephone. Now, the duke has written that he’ll be coming for the Autumn Masquerade Ball and Festival. Penelope will have to continue the charade while the duke is in town in order to protect her sister. The Duke of Wilmington isn’t fooled for a moment, but instead of confessing that he knows about the deception, he finds himself utterly charmed by Penelope and jumps into the game of deception to see how far the twin sisters will take it.

A Merry Dance is such a funny and sweet love story about a girl who thinks she knows what love is only to find that it is nothing like she imagined. Lila is such a fun character. She doesn’t appreciate having to stay out of “men’s business,” so she just eavesdrops on her uncle’s important conversations. When she just happens to hear that her uncle has a man in mind for her and that he is “old,” she does everything in her power to discourage his affections….at first that is. Lila finds that age doesn’t matter….love does. I adored this story and if you like regency romance that is clean, you’ll love this too.

Unmasking the Duke is the first book I’ve read by Donna Hatch, but I certainly be looking for more books by her now. This book is completely adorable. You will fall in love with the Duke just as easily as Hannah does. Unfortunately, when she starts falling for him, she has no idea that he is the Duke. If she had, she’d never have danced with him. He’s a snob who never remembers who she is even though he’s met her several times…at least that is what she thinks. When she finds out differently, she still thinks that they could never work out. She is painfully shy and could never be a Duchess.  This is a very well-written short story that you’ll love as well.

What’s in a Name is a very quick and fun story about two twin sisters who switch places thinking they can fool someone…who happens to be the Duke. Unbeknownst to the sisters, the Duke is in love with the sister who has been writing to him….Penelope as her sister Persephone. As soon as the Duke meets Persephone, he knows she is not the one with whom he has been corresponding. This story moves very quickly and is not as long the other two in this anthology, but it is still very sweet with fun characters.