You are here: Home / Books / Book Reviews / A Heart Most Certain by Melissa Jagears 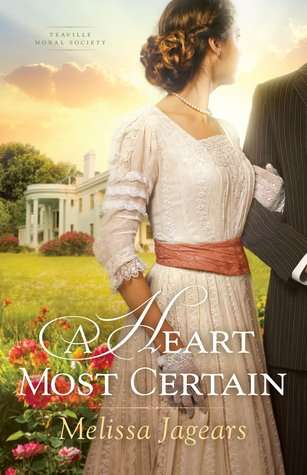 A Heart Most Certain

Lydia King knows what it’s like to be in need, so when she joins the Teaville Moral Society, she genuinely hopes to help the town’s poor. But with her father’s debts increasing by the day and her mother growing sicker by the week, she wonders how long it will be until she ends up in the poor house herself. Her best chance at a financially secure future is to impress the politician courting her, and it certainly doesn’t hurt that the moral society’s president is her suitor’s mother. Her first task as a moral society member—to obtain a donation from Nicholas Lowe, the wealthiest man in town—should be easy . . . except he flat-out refuses.

Despite appearances, Nicholas wants to help others but prefers to do it his own way, keeping his charity private. When Lydia proves persistent, they agree to a bargain, though Nicholas has a few surprises up his sleeve. Neither foresee the harrowing complications that will arise from working together. When town secrets are brought to light, this unlikely pair must decide where their beliefs—and hearts—truly align.

My Review of A Heart Most Certain

Imagine living in the past. 1905 to be exact. You are a woman desperate for a job, and you find a housekeeper job available out West. You jump at the chance because your parents have passed away and your extended family can barely keep their own children fed. Though you’re only 18, you have been keeping house since your mother got sick….you were 7. You pack up your meager belongings and arrive in Kansas ready to begin your new life. When you get off of the train, a well-dressed lady meets you and takes you to your new home where you will live and work. As you walk up the stairs, apprehension sets in. This place is much nicer than you imagined, yet you get a feeling that something is not quite right. And you’re right. It’s not. The life you imagined you were beginning is not the life you are getting. You’re at a brothel, and you’re the newest hire.

This is the exact predicament so many women in the West found themselves in in the late 1800’s and early 1900’s. This group of women play a large part in A Heart Most Certain. The Teaville Moral Society is a group of church ladies bent on getting a donation from one of the richest men in town. They’ve got quilts to make and poor people to keep warm. They’re doing good for the poverty stricken…or so they tell themselves. Why shouldn’t Nicholas Lowe contribute $30 for two sewing machines? And it’s up to Lydia King to get the money from him.

What transpires from Lydia’s first meeting to the end of this book is a beautiful story of faith and forgiveness. Of judgement and mercy. This book begins with Lydia believing her heart is in the right place. She says she wants to help the poor, but she really is trying to prove herself to her hoped future mother-in-law. She has to prove that she’ll be able to help her beau, Sebastian, in his political career by raising funds for the moral society now and Sebastian’s campaigns later. When Nicholas refuses to fund these sewing machines, Lydia sees a Scrooge.

Nicholas has a hidden self that no one in the community can see. In fact, he doesn’t want them to see. He decides to open up to Lydia, hoping that her heart will be changed by seeing what the people who need help are really like. To show her that the red-light district has more than one side.

I loved this book! The characters are very well developed, and you will fall in love with Nicholas! The story really made me see myself in Lydia. How many times do we do good works out of obligation rather than out of a heart of love? I also could see myself in the pastor’s wife. Her wisdom in knowing that she needed a season of rest to grow her personal relationship with God really hit home with me. We are so busy doing for God that we forget to just BE with Him.

I highly recommend this book and give it five huge stars! I received a copy of this book free for an honest review which I’ve given.

Thanks for sharing!
« Go Back to School with Clearer Skin from evologie
Beauty and the Clockwork Beast Book Review »